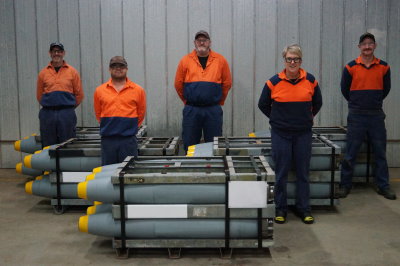 There has been much made of the Prime Minister’s announcement in late March of the creation of an Australian Sovereign Guided Weapons Manufacturing Enterprise. And rightly so. This is a big ambition for the nation and big news for defence industry. Most importantly it is more achievable than most people think and that’s because the design, development and manufacture of Guided Munitions in Australia is not an industrial capability in its infancy. Australia has 70 years of demonstrated achievement in world class collaborative work by scientists, industry (including local SMEs), and Academia in developing and manufacturing a tried and tested guided weapons capability.

If we look back to the 1950s and 60s, Australian rocket motors and booster solutions were already considered to be top-of-class. They were utilised to play significant roles in the push for both defence and commercial satellite launches into orbit. To put this into perspective, Australia was one of the first nations globally to build and launch a satellite into Space from its own soil.

At the same time and well into the 1970s and early 80s Australia was producing a range of guided missiles including the MALKARA wire-guided missile and then the IKARA ship-borne long-range anti-submarine guided weapon. The IKARA proved to be such an effective guided missile it was adopted by the Royal Navy, the Royal New Zealand Navy and the Brazilian Navy. During this period, the KALKARA Unmanned Aerial Target also came into service. Australian made rocket motors propelled this advanced guided aerial target which was capable of operating at 40,000 feet.

During the 1980s and early 90s the Australian Government centralised its sovereign rocket motor production, guided weapons and energetics manufacturing capability into one facility in regional New South Wales where it still continues to operate under Thales Australia’s management. Since that time Thales has invested heavily in energetics research and development and forged strong, enduring relationships with organisations such as DST Group, other defence Primes, Academia and local Australian industry to produce some of the best guided weapons capability in the world.

During the 1990s and early 2000s the Kongsberg Penguin anti-ship missile, whilst originally a Norwegian design, had its warheads manufactured here in Australia. The production of these Penguin missiles was to support Kongsberg supplying the Sea Sprite helicopter, however, when the Sea Sprite program was cancelled the Australia made Penguin warheads were exported to six countries. Thales was fortunate to have recently celebrated the 22nd Anniversary of the Penguin missile production with a visit from the Norwegian Ambassador at our stand at the 2021 Land Forces Conference in Brisbane.

The 1990s and early 2000s also saw the production of rocket motors for another highly successful guided weapon – the Nulka Active Missile Decoy. Nulka, which is capable of hovering in place, took ship protection to an entirely new level and was commissioned by the Royal Australian Navy, the U.S. Navy and the Canadian Armed Forces in 1999. It saw its first action in 2003 during the Gulf War and quickly established itself as a ‘game changer’ in ship protection. Later, Australia would perform a Tech-Transfer to the United States for Nulka where it continues to be built. Here in Australia, BAE, as Prime for the Nulka missile system, continues to work with Thales to this day to manufacture Nulka at the facility. The Nulka program is one of Australia’s largest and most successful defence export products – exporting guided weapons to allied forces. 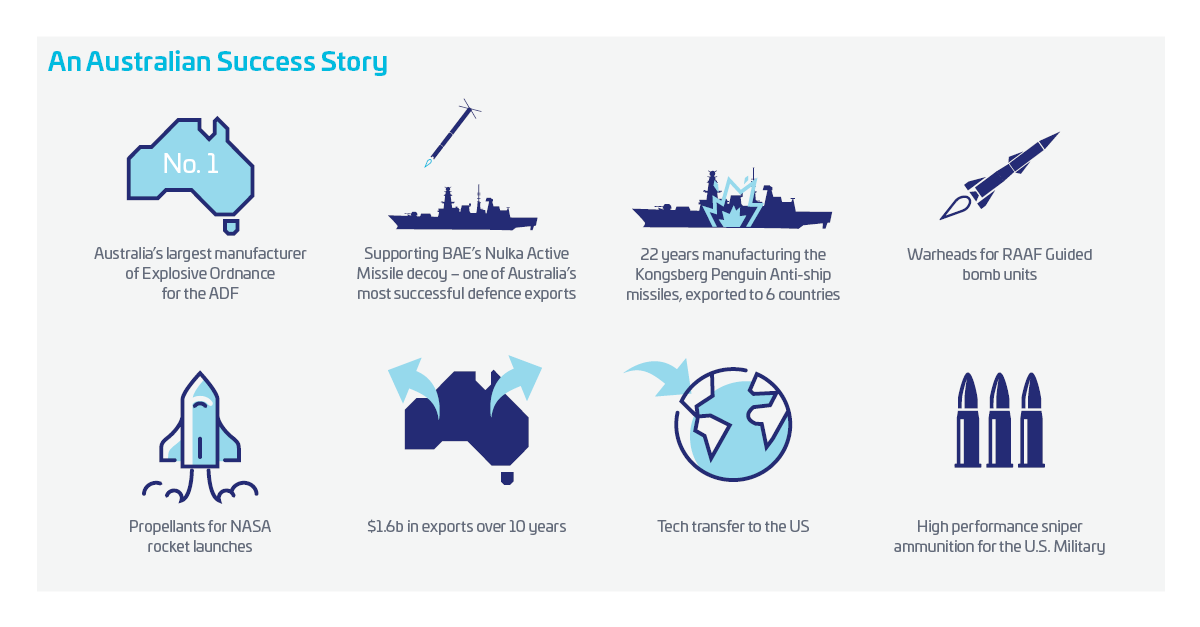 Each and every day our teams of highly skilled employees manufacture the warheads for the Royal Australian Air Force’s Guided Bomb Units (GBUs) which are authorised for its Super Hornets and manufactured for future use on its newest asset, the Joint Strike Fighter (F-35A). This work on the RAAFs BLU111 and BLU126 GBUs has been underway since 2016 and continues today, and we are currently looking to expand the scope and volume of this particular manufacturing project. Concurrently, we continue to support and invest in the research and development of advanced Guided Weapons, High Speed Weapons (HSW) and the production of new technologies that deliver defence-relevant sovereign capability.

Since all of Australia’s sovereign energetics and guided weapons capability was centralised, the site which is managed by 350+ highly skilled Thales staff has also developed a reputation for delivering some of the world’s best energetics; in particular propellant production, one of the core capabilities underpinning all sovereign munitions manufacture. Our Australian-made propellant is exported to major customers around the world including the U.S. military, and even customers such as NASA who used it on its shuttle and rocket launches. This speaks volumes to the highest quality, reliability and performance of this Australian manufacturing capability.

Our people have continued to operate safely and securely within these highly complex explosives manufacturing environments due to the high level of skills and expertise that has been nurtured and developed over 70 years. Not only does Defence and our export customers benefit from work the site produces, the positive economic impact for local Australian businesses is tangible. The site and its sister site in regional Victoria contract over 600 Australian suppliers. This investment into local business – the majority of which are SMEs – helps support regional jobs and further develops Australia’s sovereign industrial capability.