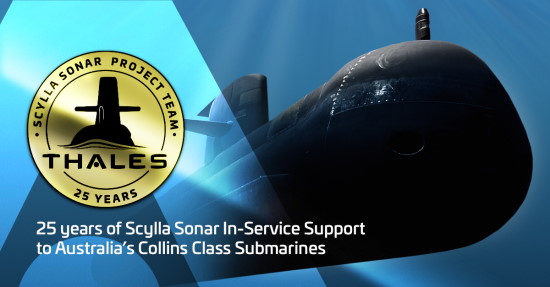 Tuesday, 7th of December 2021 marks the 25-year anniversary of providing In-Service support to the Collins Class Submarine Sonar Suite (Scylla). The sonar system is the ‘eyes and ears’ of the submarines, and is critical in supporting Australia’s strategic priority on enhancing its submarine capability.

The Scylla Sonar Suite comprises of a number of sonar sensors throughout the Collins Class Submarine, including the Thales Australia sovereign designed and developed, Towed Array Sonar. The Scylla Sonar comprises Passive and Active Sonar Arrays together with inboard processing and User Interface software that allows the Acoustic Warfare Analysts to detect, track and classify noise sources in the ocean, passing critical information the Combat System and Submarine Command.

The Scylla in-service support contract consists of a range of services all delivered by Thales’s teams based in NSW and WA. This includes planned maintenance activities, operational support, engineering support, obsolescence management, sonar upgrades and Towed Array repair and manufacture.

These services and support are delivered by 60 staff based at two Thales sites: Rydalmere in Sydney’s Western Suburbs, and Rockingham in Perth. The Rydalmere team conduct detailed engineering services, equipment repairs and Towed Array Production whilst the Rockingham team deliver waterfront maintenance and engineering support, operational support and integrated logistics support including warehousing and distribution.

“The design of the Collins Class Sonar commenced more than 30 years ago and formed the basis of Thales’s Underwater Systems capability in Australia. Today, we continue to work closely with our international colleagues to deliver sonar upgrades which will ensure that Collins remains a potent capability for the RAN well into the next decade.”

“I’m inspired every day, to see the passion our team has in maintaining and upgrading such an important capability for the Royal Australia Navy and Australia. We have team members that have sustained an enduring contribution to this team for decades! Collins Class Submarines remain critically important to Australia’s sovereignty and that purpose really resonates with our team. It’s great to be part of such an enduring legacy”

Did you know: The name ‘Scylla’ is from Greek Mythology? It’s in reference to the six heads of Scylla that represents the various sonar inputs.