Thales talks with Jason Ball on National Coming Out Day 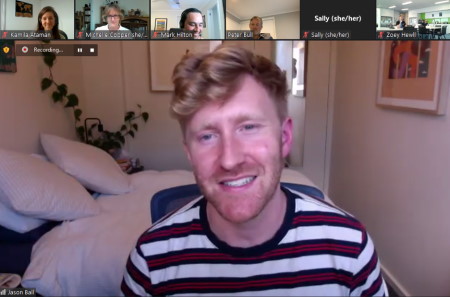 On Monday 11 October, staff at Thales celebrated ‘Coming Out Day’ an annual LGBTQ awareness day to support people who identify as lesbian, gay, bisexual, transgender and queer (LGBTQ) in "coming out of the closet" about their sexuality. To recognise the day, we hosted an online event featuring a moving presentation by Jason Ball; a former Australian Football League player and an Australian LGBTQ and mental health advocate. Following Jason’s talk, there was a panel discussion with Jason and 2 of Thales’s VPs: Peter Bull, VP Digital Systems and Mark Hilton VP Marketing and Sales.

While Jason’s entire presentation was insightful and impactful, there were 3 key messages that stood out to the audience.

Power of Coming Out – Coming Out is a personal choice and no one should be forced ‘out of the closet.’ Don’t be afraid to be who you are, as coming out can often transform the attitude of other people. People are less likely to hold negative, stereotypical or discretionary views towards LGBTQ people if they know someone on a personal level

Power of a story – To change attitude and behaviours you need to change your heart and mind. It’s through sharing a story that we are able to build empathy and understanding towards people who are different to us.

Power of allies – We need visible and proactive allies in celebrating diversity. The LGBTQ community make up 10% or less of the community and we are all responsible for fostering a culture where everyone feels safe and proud to be who they are; that’s the environment that will enable people to thrive and succeed. We all have the power to provide support whether it’s in a small or a big way.

‘Even if I had a choice I wouldn’t change who I am. Being gay is a part of who I am and I’m proud to be myself, I’m happy to celebrate it’ – Jason Ball