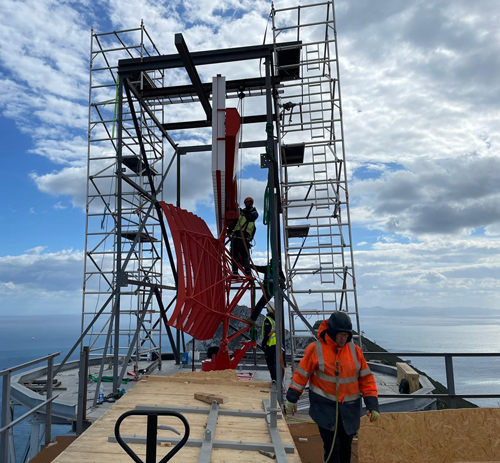 A challenging engineering installation project on top of the Rock of Gibraltar has passed a significant customer acceptance milestone that will ensure radar surveillance for the RAF Gibraltar airfield and International Airport for many years to come.

Programme Marshall, part of the UK MOD’s upgrade of Air Traffic Management equipment, has completed the impressive “Gate 4” Milestone that marks the end of the installation and testing phase of delivery for the new radar on top of the Rock of Gibraltar.

More than 100 specialist personnel have been involved in the delivery of this installation that has changed the skyline at Gibraltar. The radar sits at an impressive 413 metres above sea level, taller than the Eiffel Tower and comparable in height with the Empire State Building.

Underslung airlifts of the equipment to the top by Chinook helicopter became a familiar sight to the residents as the project developed.

One of the most striking visual changes to the profile of the iconic rock has been the installation of a giant white spherical dome to protect the radar from the surprisingly extreme weather often encountered on the summit.

One of the most striking visual changes to the profile of the iconic rock has been the installation of a giant white spherical dome to protect the radar from the surprisingly extreme weather the summit often endures.

But the all-important commissioning phase involved a specialist flight-checking aircraft from Thales Flight Inspection Services, which flew back and forth and around the radar to demonstrate its critical operational performance.

Volumes of data were collected for computational analysis to prove the radar could operate as expected. These reports were then provided to MOD for their assessment and approval.

Eddie Trott, Regional Programme Manager, Thales in the UK said “We are extremely pleased with the delivery of this project and performance of the new Primary and Secondary radars at Gibraltar.  The challenge of delivering at the top of ‘The Rock’ has been daunting and yet inspiring and hugely rewarding.  It is certainly one of the most difficult installation locations in the whole of Programme Marshall but a pleasure to be a part of and satisfying to see it complete.

“We were delighted to receive exceptional support from RAF Gibraltar and the Government of Gibraltar.  A huge thank you to the hundreds of staff involved in delivery and to the many Gibraltarians that have helped make this happen. This new radar installation will hopefully serve Gibraltar for decades to come.”

With the Gate 4 milestone now passed, the radar will now be aligned with the delivery of the new Thales Topsky Air Traffic Display systems soon to be installed in the control tower next to the airport.

Once all these systems have been successfully integrated, the radars will enter operational service next year.

The upgrade is part of the Aquila-led Programme Marshall to modernise and support the MOD’s airfield air traffic management across the UK and overseas.