Keeping electromagnetic interference in radars at bay (Under the Radar #6)

Electromagnetic radiation can make or break a radar. It’s what gives the system its sharp eye, but it can also seriously interfere with its operation. Frank Leferink helps to keep these unwanted effects under control, both at Thales and the University of Twente.

Not so long ago, cars had just one antenna, allowing the occupants to listen to AM and FM radio. Current models have multiple antennas, ergonomically combined under a shark fin cover mounted on the roof. Next to ‘old-fashioned’ AM/FM, they enable the reception of mobile phone signals, GPS, digital audio broadcasting and soon car-to-car communication as well. “We’ve been seeing a similar development on ships,” observes Frank Leferink from Thales. “Over the last 40 years, we’ve moved from a ‘simple’ onboard radio and navigation radar to a complex assembly of electromagnetic systems for communication and surveillance.”

The increase in complexity has had a major impact on electromagnetic compatibility (EMC), the ability of electrical equipment to function acceptably in their electromagnetic environment by limiting the unintentional generation, propagation and reception of electromagnetic energy. Leferink is a preeminent authority in this discipline, doubling as EMC director at Thales and professor in EMC at the University of Twente (UT). “Having completed my bachelor, I joined the company in 1984, when it was still called Hollandse Signaalapparaten. After a couple of years, I mixed in a master at UT, supported by my employer, followed by a PhD. In 1998, Thales intensified its collaboration with the university and I was asked and appointed as a part-time professor.”

“I dabble in electrical disturbances,” paraphrases Leferink his field of expertise. “As a UT professor, for example, I examine the electromagnetic effects that telecom and transmission towers, wind turbines and the like can have on sensitive equipment, radiated as well as conducted. I’m also investigating smart meters and other electronic devices displaying erratic behavior as a result of electromagnetic interference. At Thales, I’m looking at the electrical disturbances caused and experienced by radars.” 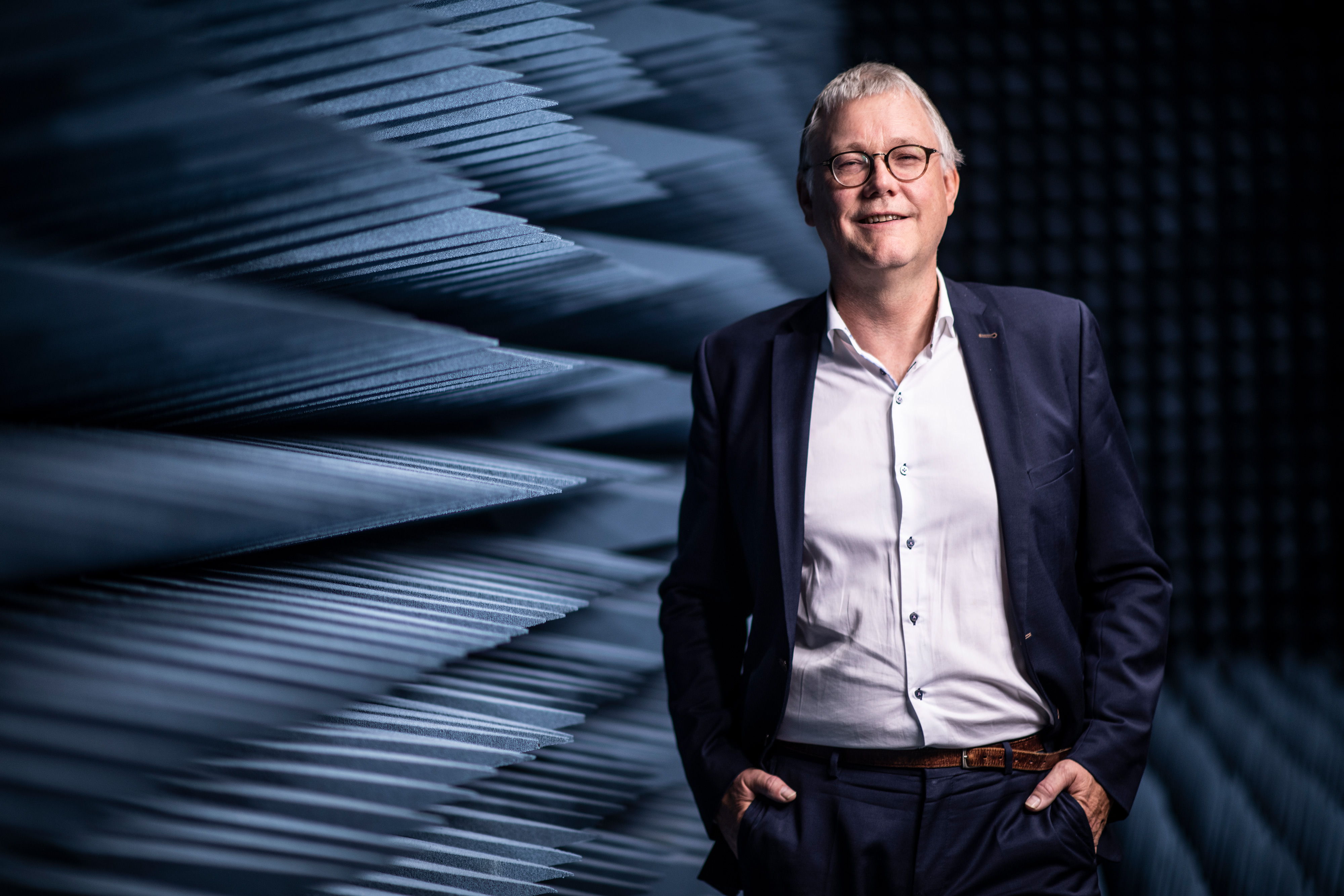 An important focal area for Thales is integrated topside design, overcoming the EMC challenges of the sensor systems operating on the part of a ship above the waterline. The best place for these systems is on top of the highest mast. Unfortunately, only one can benefit from this position; the others will be blocked to a certain extent by the mast. The systems will also interfere with each other. On most naval vessels, it’s necessary to switch one off before another can be used, which has been the cause of some serious incidents. Thales’ Integrated Mast eliminates these problems, in addition to saving integration time and hence costs.

The Integrated Mast (I-Mast) is a housing accommodating all major radars, sensors and antennas of a ship. This “world-leading development,” as he calls it, is one of the landmark projects at Thales that has benefitted from Leferink’s EMC expertise. “Traditionally, radars have to fight for the best spot on the mast, resulting in a suboptimal placement where they end up partially obscuring each other. In the I-Mast, we’ve positioned the sensors above one another in such a way that they all have an unobstructed field of view.”

Spatial placement, or diversity, is one of the dials EMC specialists can turn to solve interference problems. “Frequency diversity is another. You can prevent radars from getting in each other’s way by having them operate at different frequencies – just like you can tune your radio to different stations,” explains Leferink. “Or you can use time diversity: when I’m talking, you keep quiet, and the other way around. Likewise, you can listen only when the radar is emitting. You can also encode signals differently and only listen to the radar with a specific encoding.”
Leferink isn’t only looking topside, but also inside, on component level. “Power quality onboard a ship is a very important aspect as well. You don’t want one system’s inrush current causing another system to go down. And what happens to the electronics when lightning strikes? My job takes me from nanovolts in signal reception to megawatts in power quality and lightning, and from DC to 40 GHz and beyond.”

“At Thales, I’m involved at both ends of the V model: in the very early stages of new developments and in the radar delivery process,” continues Leferink. “It ranges from doing preliminary studies into concepts that may materialize in five years to analyzing for customers which of our radars would work for them in places where they encounter specific interference. I’m also researching new technologies to push the boundaries, together with the University of Twente and colleagues within the Thales group.”

Next to his position in Hengelo, Leferink heads the international Thales network of excellence on EMC. “We’ve got some one hundred specialists worldwide. In France, Germany, Italy, England, also near Los Angeles and Sydney – I’ve been all around the globe.”

There’s a lot to do for EMC specialists at Thales. “It starts with thinking about fundamental concepts, doing research together with potential customers, often in the Netherlands, and running simulations,” Leferink illustrates. “Next, we can set up experiments – we’ve got some neat facilities, including an accredited lab.”

In the development phase, the EMC experts join forces with multiple disciplines. “We create demonstrators and detailed designs together. The designs are then built, validated and tested, from the individual parts to the complete radar. The EMC team checks if there isn’t too much unwanted emission, causing interference with other equipment, and if the system can withstand voltage dips and overloads and lightning strikes, for example.”

The work doesn’t stop when the radar leaves the factory. Leferink: “We tag along as it gets hoisted on a ship and run an extensive set of tests there. We check whether everything has been installed correctly, whether the installation works together with the other systems on board, whether the non-radiation zones have been properly implemented. We even get to accompany the radar out to sea and monitor its EMC behavior in the field.”

“As an EMC engineer at Thales, you can commit yourself completely to one project, from inception to delivery, or part of it – whatever floats your boat. We’ve got hardcore test engineers who love it in the lab and don’t see the light of day, so to speak. But there are also those who love to travel and perform tests all around the world.”

“We’ve come a long way in 35 years,” concludes Leferink. “When I started at Thales, we didn’t do much during development to mitigate EMC problems. We ran a couple of qualification tests, but that was basically it. We had some real handymen who went out there to solve the issues on the spot. Those days are long gone. We’re now an integral part of the development chain.”