Thales on board the Dassault Aviation Rafale

Armed forces are currently being reinforced everywhere in the world. In order to guarantee their sovereignty against any eventuality, countries wish to reinforce their air superiority by acquiring new resources, particularly by ensuring the availability of combat equipment able to accomplish several missions in the course of the same sortie. These missions are: air defence, reconnaissance, precision attacks on ground targets and the detection and tracking of targets at sea.

The Dassault Aviation Rafale meets these requirements and cover all these missions, particularly thanks to Thales electronics, which approximately accounts for 25% of the value of the platform. Thales electronics is on board the Rafale for France, Egypt, Qatar, India, Greece and Croatia.

All Thales equipment on board the Rafale contributes to the performance recorded in theatres of operation, particularly thanks to sensors, where the data is merged within the modular data processing unit, MDPU. This multi-sensor data fusion is a decisive factor, ensuring the Rafale stands out. This outcome was jointly achieved by Thales and Dassault Aviation and creates a link between the overall battle field surrounding the aircraft and the pilot's brain, with its unique ability to understand the implications of a tactical situation and take the best possible decision. Thanks to the system's computing power, the data fusion incorporates data from the AESA RBE2 electronic scanned array radar, the SPECTRA electronic warfare system, the FSO (Front Sector Optronics) system, IFF (Identification Friend or Foe) and datalinks.

By allowing the pilot to become a real tactical decision-maker rather than simply an analyst of sensors, and by equipping the Rafale with state-of-the-art equipment, Thales, along with Dassault Aviation, contributes to the air superiority of Air Forces in all decisive moments.

Equipped with the AESA RBE2 (Bi-plan Active Electronically Scanned Array Radar), the Rafale benefits from an electronic scanned array and an active antenna, keys to the aircraft performance. This radar is the first in Europe to be operational and have demonstrated very high proficiency in several theatres. 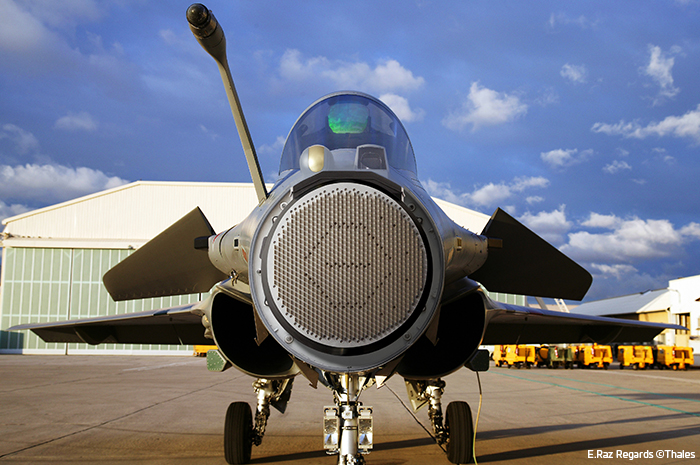 The SPECTRA equips the Rafale with a 360° multi-spectral warning system against enemy radars, missiles and lasers. The SPECTRA can detect threats over a long range and identify and locate these threats, allowing the pilot and the system to immediately react in the most suitable manner: electromagnetic jamming, infrared decoys, manoeuvres and combined actions.

In addition, thanks to the angular precision of its locating features, SPECTRA can be used to accurately locate threats on the ground in view of avoidance and targeting.

Thanks to precise and long-range detection and location capacities for airborne targets, the system can also help to prepare an early tactical situation awareness based on a library of embedded threats, defined by users.

This library is a key component of the system's performance. The protection provided on board the Rafale can thus be constantly improved, with absolute fluidity, according to the progress and evolution of operations. 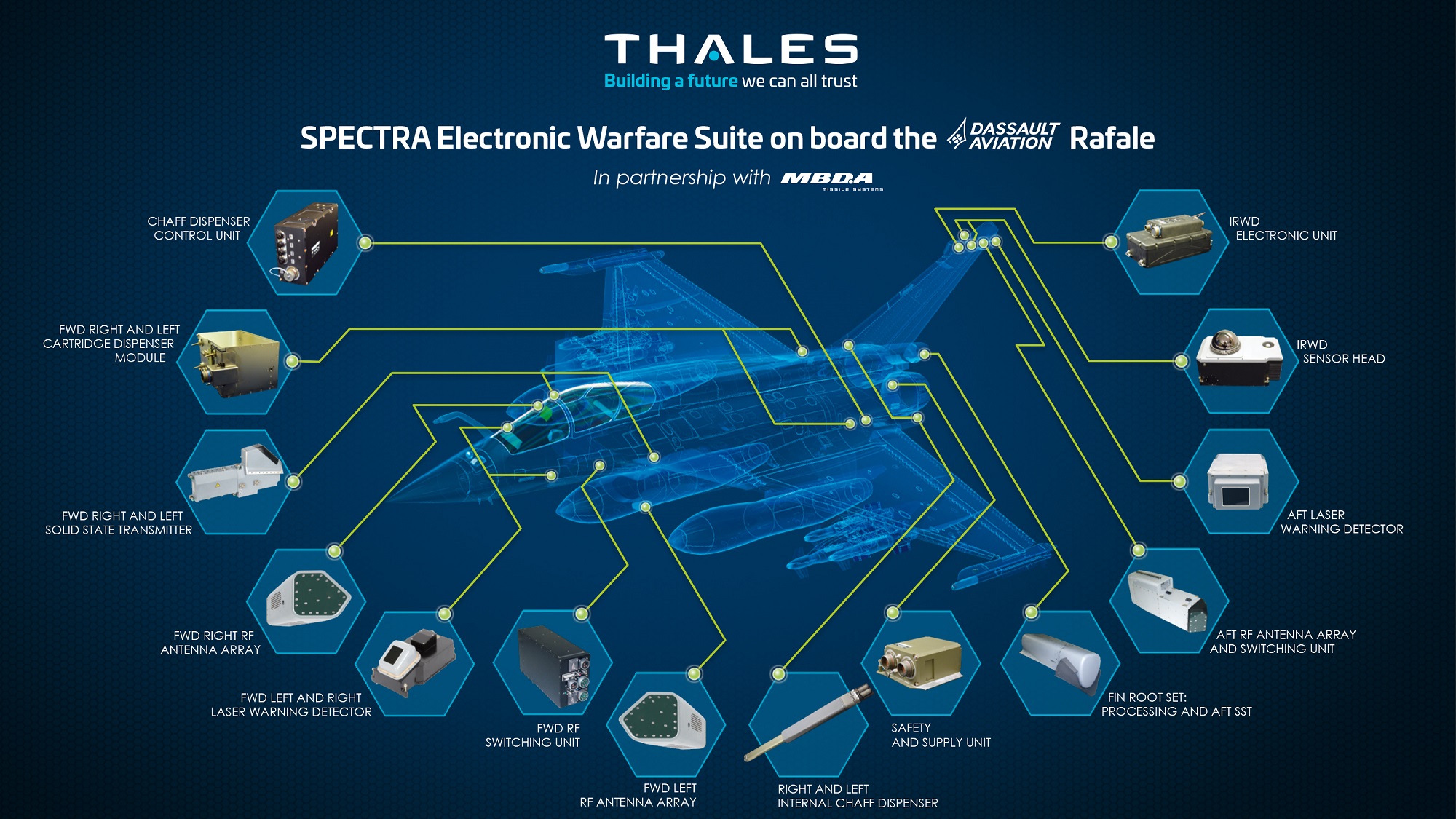 The Front Sector Optronics (FSO) is integrated in the air frame just like AESA RBE2 and SPECTRA, and can discretely detect and identify airborne, naval and land targets over a long range, with high resolution angular targeting and laser telemetrics.

This sensor operates at optical wavelengths and is invulnerable to radar jamming. FSO helps to effectively appraise the tactical situation and reinforces the aircraft's ability to operate in difficult environments.

The laser systems used to measure the distance to the target guarantee high precision 3D location for the FSO. Its visible spectrum options are particularly useful with its narrow field to identify possible targets in situations where visual contact is necessary according to combat rules, or with warnings requiring a rapid response. 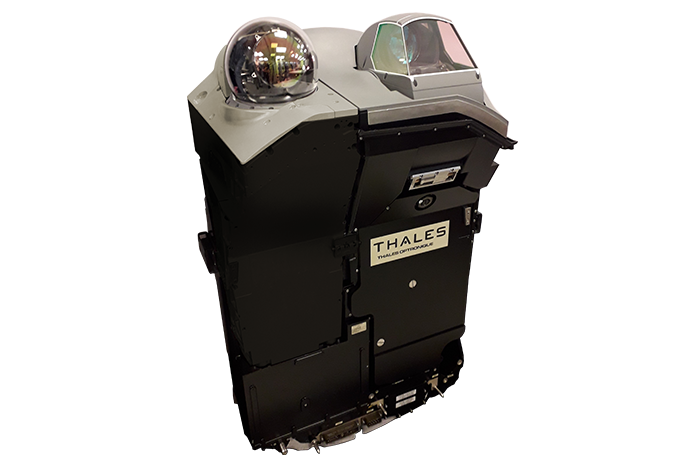 The TALIOS (Targeting Long-range Identification Optronic System) pod is equipped with top-down and bottom-up datalinks, and covers the entire range of missions, from intelligence to acquiring and pursuing targets. The pod is able to scan a large area, identify targets and immediately switch to acquisition and pursuit mode for these targets.

Its high resolution and ability to see the colour situation simplifies the tasks of crew. Thales has also developed the "Permanent Vision" mode to assist pilots. This mode can be used to incorporate the image entered by TALIOS in a 3D map. The crew can therefore accurately locate the area filmed by the pod. Several visual indicators provide complementary real-time information on the tactical situation. 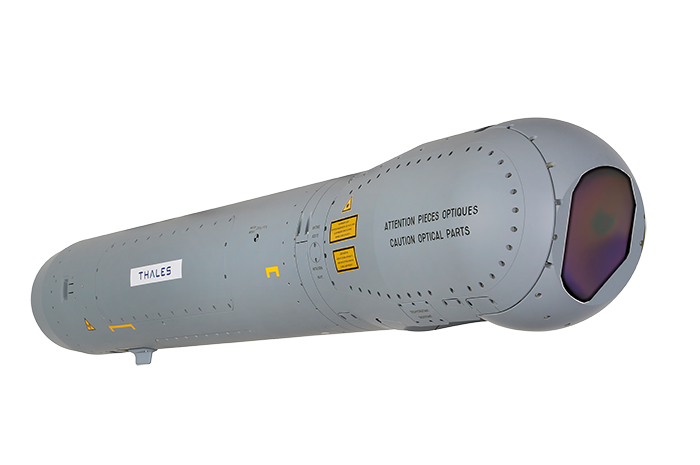 The AREOS (Airborne REcce Observation System), known as Reco NG in France, is designed to meet all operational requirements on board the Rafale, based on miscellaneous scenarios and possible weather conditions. This pod integrates new-generation digital technology in terms of both the selected sensor and detection solutions and real-time/deferred transmission capabilities. AREOS can reduce cycle times for detection, decision and action, ensuring a faster response to changing mission requirements. Thanks to its automatic collection modes for operational images, AREOS can be simply integrated in the Rafale. 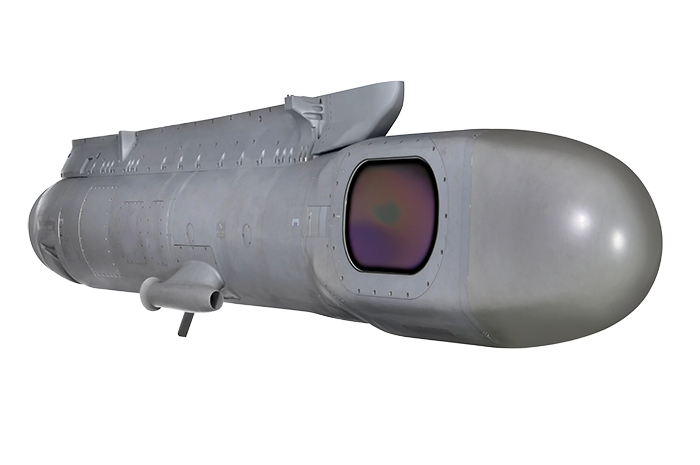 Tactical datalinks offer a secure datalink, with an appraisal of the tactical situation, for command and control, electronic warfare, commands and reports, flight information and aircraft-to-aircraft data. In addition to the key contributors in combined air operations, this data is used with friendly aircraft in the context of training, with air and land command and control centres, forward air controllers, etc.

The IFF Thales BlueGate TSB 2500 is a combined interrogator transponder, which fully satisfies civilian mode requirements. They include modes S, NATO with modes 4/5 and/or secure national modes (NSM). Furthermore, the Rafale is equipped with an E-Scan version including an Antenna Control Unit (ACU), which can be used to direct the antenna electronically. 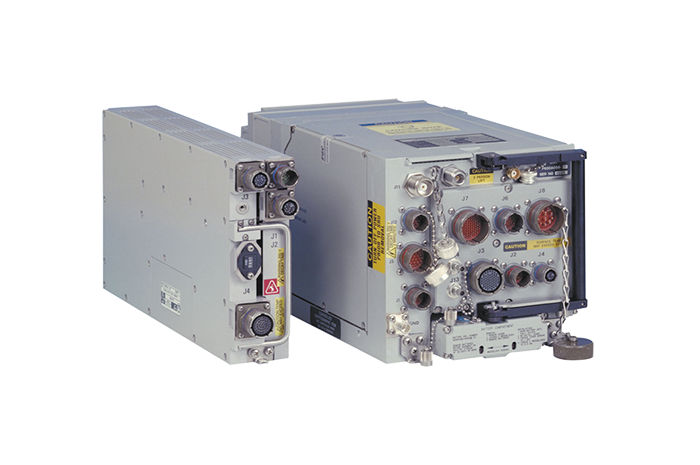 In essence, the “multi-sensor data fusion” concept implemented into the Rafale allows the pilot to act as a true “tactical decision maker”, rather than being only a sensor operator.

It is a full automated process carried out in three steps:

It hinges on the computing power of the MDPU to process data from the RBE2-AESA radar, the “Front Sector Optronic” (FSO) system, the SPECTRA EW system, the IFF, the MICA infrared seekers, and the data link.

The MDPU is the cornerstone of the upgradeability of the Rafale. It allows a seamless integration of new weapons and new capabilities to maintain the warfighting relevance of the Rafale over the years as tactical requirements evolve, and as the computer industry keeps rolling out new generations of processors and software. 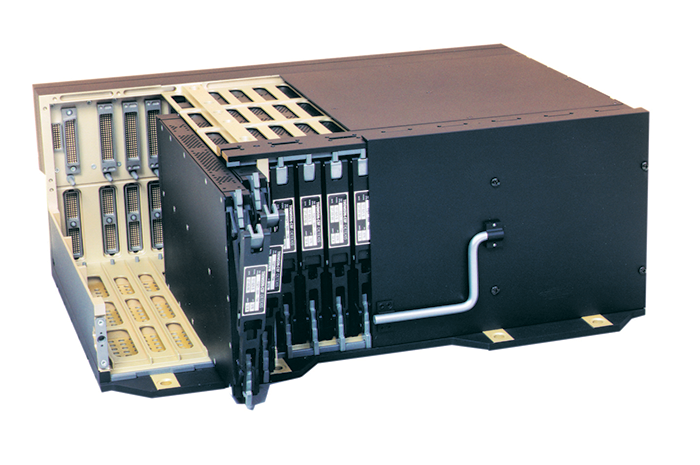 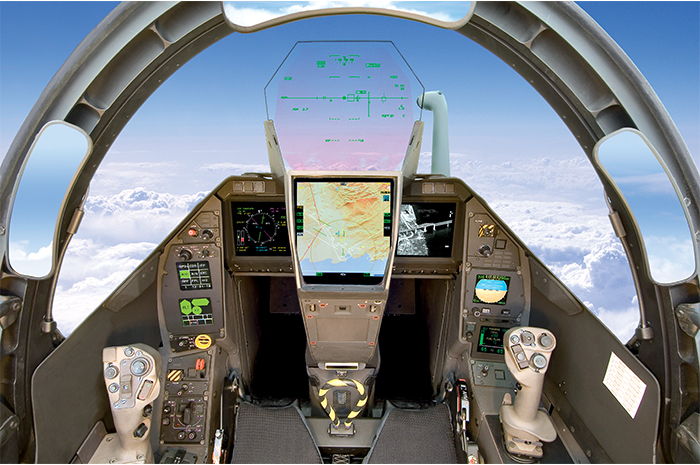 The Rafale benefits from variable frequency power generation. This approach can be used to reduce the weight of the aircraft in order to minimise maintenance costs. This technology improves output compared with the constant frequency technology traditionally used on board aircraft. This system can be used to capture the mechanical power of the aircraft's engine and convert this power into electricity to supply the different on-board systems, such as electrical flight control systems. 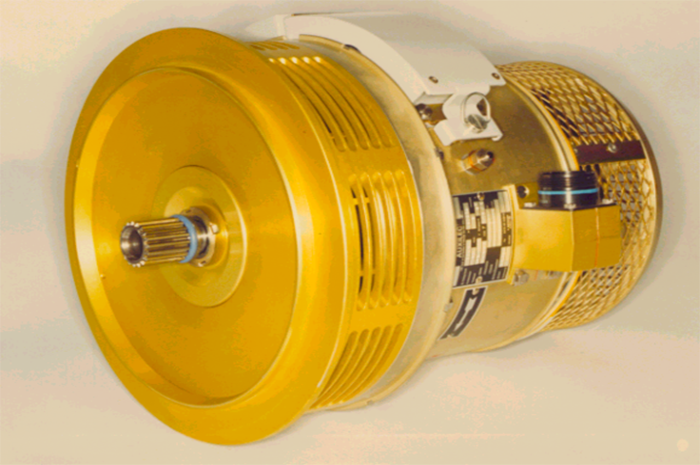 Thales, Sogitec and Dassault Aviation have jointly developed two training centres in France for the purposes of training Rafale pilots. The French Air Force operates a simulation centre in Saint-Dizier for flight training on this aircraft. The second Rafale simulation centre dedicated to the Aéronavale is located at the Landivisiau base. These two simulation centres function as a network in order to complete all joint training procedures. The simulator cockpits recreate a realistic environment for Rafale pilots, who can fly individual or collective missions in a complex tactical environment, including air combat, using the Datalink 16, ground attacks, in-flight refuelling, take-offs and landings from aircraft carriers, all in consideration of weather conditions. These training and simulation solutions are adaptable for export.

Support and service dedicated to the Rafale are available in different configurations, reducing life cycle costs, ensuring the operational performance of each on-board system and raising operational readiness. This innovative way of managing in-service support, called “Performance Based Logistics”, is based on guaranteed availability of equipment from the industry.

In France, in order to improve efficiency, the support and service of several suppliers are brought together in a global contract called RAVEL. 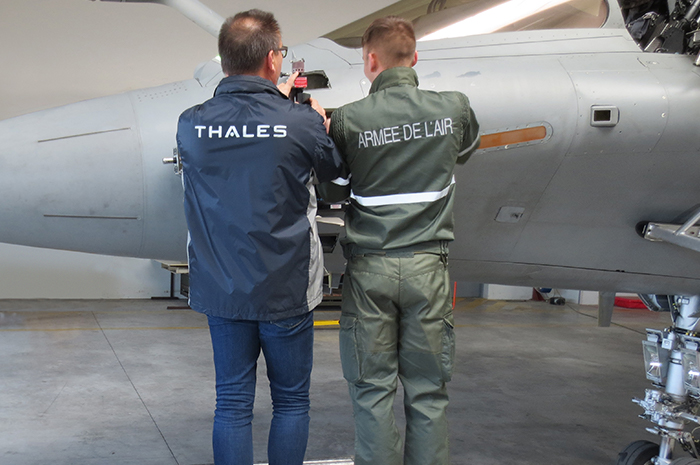 Thales supplies most of the sensors and electronic equipment on board the Rafale. In close cooperation with Dassault Aviation and the DGA, Thales constantly develops innovative solutions applied to existing on-board electronics. Thales thus contributes to maintaining the Rafale, through successive standards linked to the evolution of operational needs, at the forefront in its category, thanks to an architecture designed for full scalability.