The connectivity of people, the key for increased security

The strategic paradigm in which we have found ourselves over the past fifteen years is characterised, in particular, by three basic trends. These trends are going to become more pronounced, and each is capable of bringing about substantial destabilisation, both at the level of certain states as well as on a regional or global scale.

The first trend is mass terrorism. The attacks of 11 September 2001 are the most striking example. Suicide attacks, car bombings, attacks with automatic firearms in crowded public places (shopping centres, train stations, etc.) have become a dramatic way of life for a number of states, not only in the Middle East, but also in Europe and the Americas.

The second, more recent trend is directly correlated with the first. It concerns the massive influx of illegal migrants at the borders, migrants who are fleeing states that have been weakened by these terrorist attacks or the civil wars that often come after them. This ever-increasing exodus of people is likely to dramatically disrupt regional balances, provoking disorder anew and bringing about a terrible vicious circle.

The third trend, shared by the previous two, is the “theatre of operations” where these tragic events take place: borders first, then urban centres. These are the objectives of both terrorists and refugees. The former hope to spread chaos, the later to rebuild their lives. Now, we know that by 2050, two-thirds of the world’s population will be urban, living in cities that are increasingly populated, large and complex. Being able to maintain order and security in these urban areas is thus a priority for all states. Within this framework, new tools must be used in order to meet future challenges.

Connected police officers for a smart city that is safe

The central link of security operations, police officers will be the primary recipients of these new solutions, which will seek to increase the connectivity of law enforcement agencies. For although these agencies already seem to have made use of a diverse network of high-performing tools (radios, computer terminals, etc.), they have only begun to connect all of the means of maintaining security. For the moment, the vast majority of police forces still operate using systems of communication that function on TETRA (Terrestrial Trunked Radio) standards that are essentially geared for voice and text transmission. They still do not have access to high-speed links. Yet the connected police officer of tomorrow will need such an asset to exchange photos and videos. This is Thales’ goal. 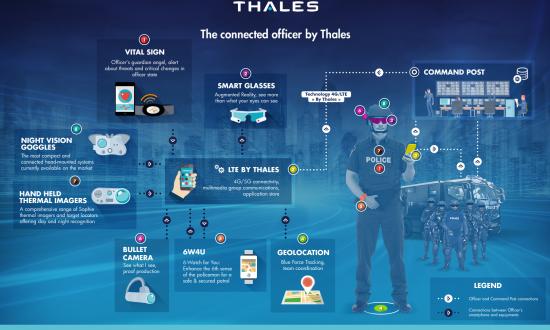 The connected officer by Thales - infographics
View the document

The group has already shown the substantial advantages that are offered by the availability of a video monitoring system that can cover an entire urban area. As part of the Ciudad Segura project, Thales deployed more than 14,000 video surveillance cameras in Mexico City. From the time these tools were installed, emergency response times, in the case, for example, of an unwell person, were divided by six, going from twelve minutes to two. Saving time here is a question of saving lives. This is only a beginning. The connectivity system that will allow police officers to be truly connected has yet to be deployed. But the lion’s share of the work is already done, since most large cities are already equipped with high-speed communications networks. A network of extremely dense and high-performing communication channels indeed exists, with more than 1.3 billion 4G users worldwide, a figure growing exponentially, and the interconnection of objects via the internet (Web 3.0). Nevertheless, police forces are not yet able to connect to these channels at will. It is essential that they be able to do so. Civil networks, however, are not designed for such critical use. If an attack or serious accident were to take place today, first responders would be faced with a network overloaded with calls if they tried to use it. It is thus necessary to create functionalities that enable them to take control of the network. This is what Thales proposes with LTE, a 4G standard that will make it possible for police officers and emergency services to connect in any circumstance to the local network in order to make use of all of its potential.

This is similar, to a certain extent, with what happens today in the most modern armies, where people and devices cooperate closely on a digital battlefield. Thanks to this system, law enforcement agencies will thus be able to work in synergy and in real time. They will be able to make group calls, connect to their command centre and send photos and video live by means of new application software functionalities. The operational benefits that are possible will be immense.

The use of LTE will permit all equipped organisations (police, firefighters, paramedics, hospitals, etc.) to communicate in real time on a shared network in a multilateral framework, enabling an optimised understanding of a crisis situation. Information sharing will be much more effective via real-time transmission of images. These images will take the place of voice or text exchanges between those deployed on the ground and command centres, which will make it possible for decision makers to see events unfolding in real time. This will enable a substantial reduction of what in military terms is called the OODA loop[1]. Body cameras enabling law enforcement officers to transmit what they see live will reinforce the discretion of those deployed, as they will no longer need to resort to their radios to give a report. The use of body cameras transmitting what is happening in a given area live will also enable the gathering and legal validation of evidence, with visuals being authenticated by means of geolocation and timestamps.

LTE will also permit increased efficiency in the framework of traditional missions, such as identity checks and traffic stops. If police officers can connect to the city’s infrastructure (video surveillance cameras, etc.), databases will allow them to gather information remotely, in order to validate, for example, the identity of a suspect, making the procedure much quicker and the risks of error much lower. If law enforcement agencies connect to all of the networks of a smart city, it will be possible to provide greater security to this city, people and infrastructure, all while simultaneously strengthening the security conditions of police officers. 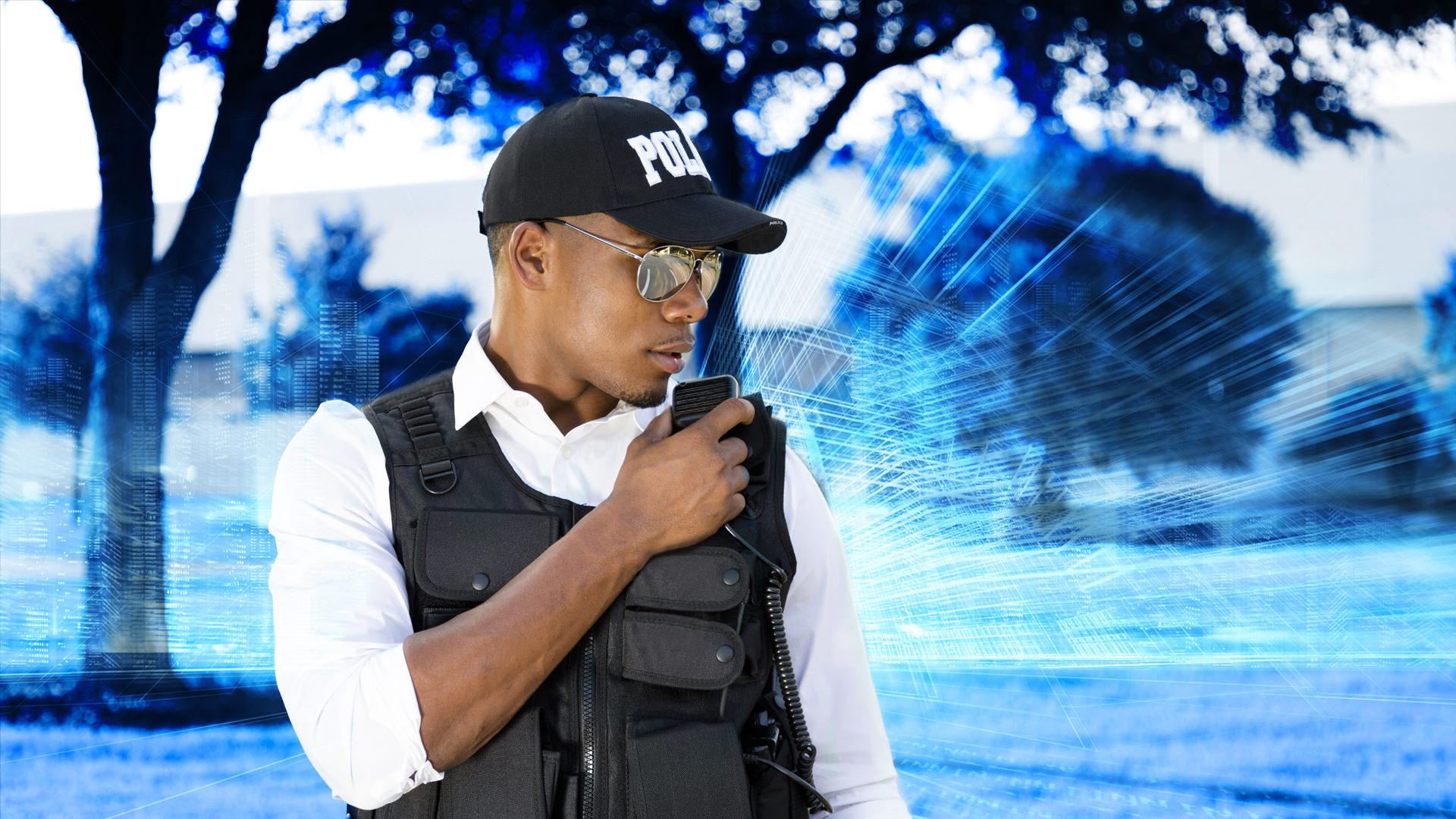 LTE, a standard at the service of a supplementary range of tools

These officers will of course have to implement a range of tools linked to LTE in order to effectively carry out the missions that high-speed connections make possible. Wearing helmets equipped with cameras that can capture images both day and night, police officers will also be equipped with augmented reality glasses. These will make it possible for officers to visualise the images received by their thermal imaging cameras via a smartphone that centralises and dispatches all of the available functionalities via LTE. Police officers will also be equipped with smartwatches, on which the geolocation of colleagues as well as other information will be displayed, freeing them from having to consult their smartphones and thus keeping their hands free to do their job. Equipped with sensors monitoring their physiological functions, (heart rate, body position (on the ground or standing), stress level, etc.), police officers will be able to work directly with their command centres and their colleagues in real time and in more secure conditions.

The data transmitted by this very modular equipment will be correlated with the data from other officers, the information provided by the city’s surveillance network and the information contained in databases. After being processed remotely in data centres, only the most relevant information will be extracted, so as to send only the most essential elements to those deployed on the ground and to decision makers. This rapid analysis of elements will make it possible to take decisions quicker.

All this data, naturally, will require first-rate cybersecurity measures. It is essential the images sent by an officer on the ground not be intercepted or altered. This is equally true for the information sent from command centres and for the databases consulted. The implementation of firewalls, as well as the ability to remotely neutralise smartwatches and smartphones in the event of theft, is thus anticipated, in order to make 4G available that is both resilient and protected from cyberattacks. Thales, where cybersecurity is a core business, will fulfil this operational need.

A system essential for the securing of a smart city, LTE can provide the same advantages outside of urban areas. The system can function in remote regions, by means of ad hoc connectivity in areas where connectivity is limited or absent. This can be done either by using the infrastructure of the networks already deployed by mobile telephony operators, onto which systems enabling the securing of the link can be added, or by means of 4G communication bubbles, possibly connected to the network via satellite link. Operations such as border controls will be able to benefit from the same assets in terms of intelligence, the verification of information, real-time cooperation and synergy between command and those on the ground. Whether it’s in the centre of a high-tech city or in a remote area, the connectivity of people is the key for increased security. LTE is one of its instruments.