ELINT intelligence in the third dimension

Installed in a pod, the ASTAC system is designed to be mounted as an external ventral load, on combat aircraft, including during supersonic flights. Its mission is the surveillance of the electro-magnetic environment and tactical electronic reconnaissance. This function includes a real-time target designation, general electronic situation updating and « Electronic Battle Order » generation capability. 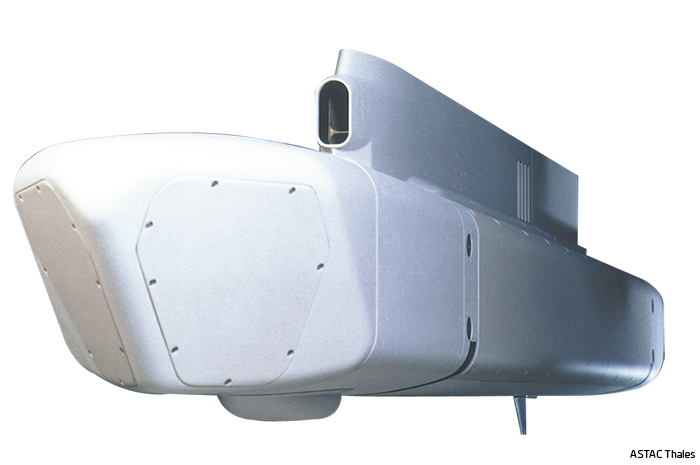 The ASTAC pod can operate in a dense electro-magnetic environment, and its sophisticated locating software provides an extremely high precision direction search capability. The ASTAC system uses the latest reception techniques to provide a very accurate measurement of the intercepted signal parameters, irrespective of the transmission technique or the existing electro-magnetic environment. Finally, another operational advantage of the ASTAC system is that it identifies enemy transmitters in real time.

The ASTAC pod weighs 400 kg and is 4.1 m long. It has its own independent cooling system and electrical power consumption is only 2 kVA. The ASTAC system also includes an ASTAC Processing Ground Station (APGS), for computerized mission planning and playback. The APGS can be a fixed or mobile installation.

The ASTAC pod is validated on several types of combat aircraft, notably the Mirage 2000, F-4 Phantom II, F-16... The modular design of the ASTAC system also enables it to be installed in a SIGINT aircraft.

The ASTAC system has been in operational service with the French Air Force since 1990 and is used for ELINT missions in several theaters of crisis and war.

The ASTAC system is exported to many countries, both within NATO and throughout the rest of the world.