Southern Launch is taking entrepreneurship to new heights in South Australia. By aligning their business goals with defence industry priorities, they are demonstrating a new approach to innovative, technology-driven solutions in a forward-focused industry. 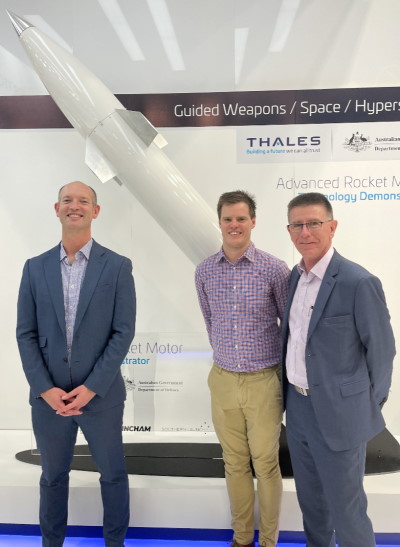 With the release of the Commonwealth’s Force Structure Plan in July 2020, that identified $100 Billion to be spent over the next 15 to 20 years on Guided Weapons and Hypersonics, Thales has been working hard to accelerate our Guided, Space and Hypersonic activities across a range of programs to support the government initiative to enhance Australia’s sovereign capability and sustainment of guided weapons.

Southern Launch, as Australia’s only approved space agency launch facility, has a unique part to play in this program, and are contributing significantly to the testing phases.

They offer an end-to-end service for both Australian and international clients, and have demonstrated their capability to manage preparation and operations including mathematical flight performance simulations, safety management and logistics for launch testing.

Partnering with Thales for the ARMTD program has seen Southern Launch combine its two specialities, design and launch. Southern Launch modelled the dynamics of the flight vehicle and designed the onboard avionics and flight systems to support Thales’ rocket motor.

A key aspect of this process included Southern Launch securing the necessary permits to take the technology to the launch facilities and be able to test it in a physical environment. In order to test new products and receive approval from regulators, the rocket design and operation is required to be safe and have a low environmental impact. Achieving this is difficult without experienced engineers like the team at Southern Launch who have been able to accelerate the approval process using experience, and through strong stakeholder and government engagement.

Partnering with Thales has been an exciting opportunity for Southern Launch. The close working relationship, which continues to grow as the program develops, has seen a true collaboration established.

“The level of inclusion on the decision-making process has been exceptional with Thales. They have truly taken us under their wing and said, “let’s do this amazing work together”’ said Lloyd Damp, Chief Executive Officer of Southern Launch.

As Southern Launch begins to mature as a company, and with the establishment of longer-term contracts such as the ARMTD program, they are looking to expand their team of 27 by offering traineeships and career pathways. Mr Damp is also currently looking to hire more specialised engineers and said the aerospace industry is often intimidating to those not from a traditional space background.

“The key elements we look for are a desire to be challenged, a willingness to push the envelope, and look outside the text book. We can train for specific roles, but recruit from a broad range of skillsets from boilermakers to engineering PhDs” said Mr Damp.

Southern Launch is hopeful that the ARMTD program will help to accelerate the aerospace industry and Australia’s sovereign GWEO capabilities. As Thales continues to source key weapon components and services from Australian SMEs, job opportunities in the supply chain will likely increase. According to research by Accenture, over half of the supply chain jobs that Thales is supporting through their Australian programs are from SMEs.

“Partnering with Southern Launch has seen accelerated development of Australian sovereign capabilities within the Guided, Space and Hypersonics enterprise. We are proud to further support this rapidly growing industry and look forward to collaborating to shape the future of High-Speed weapon systems from Australia” said Duncan Watt, General Manager of Guided Weapon Systems at Thales Australia.

“I believe we are at the crest of a wave that will develop something unique for Australia and will be marketable to the broader international market.”

By developing a space launch capability, Southern Launch are creating accessibility to space for all Australians, so we can advance and improve how we operate technology and communications, not just for the Defence industry, but beyond.

Contact Thales to find out how you can partner with us to deliver Australia’s Sovereign Guided Weapons Enterprise program and contribute to local job creation and industry growth.