It’s a scenario many Aussies are used to: dropping something in the pool and having to do a quick duck dive to pick it up; often with accompanying cheers from your relatives/mates. Now, imagine if something was sitting on the bottom of a 30-foot pool – how would you get it? You aren’t going to be able to take a couple of deep breaths and hope for the best. This exact scenario presented itself to our team at Rydalmere when they needed to retrieve an item (not a Zooper Dooper) from the bottom of our Test Tank. 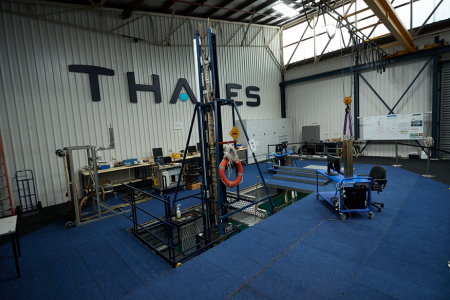 One of the many benefits of working at Rydalmere, in amongst world-leading experts in the field of sonar and acoustics, is that we often have things on hand the average workplace does not. In this instance, we were able to utilise a few of our, you know, standard office items including a Remote Operated Underwater Vehicle (ROV) and, not as interesting but a little surprising, a dustpan.

This ROV wasn’t just any ROV, it’s one a few of our team are working on with students from the University of Technology Sydney (UTS). The software on board is a combination of open source work, code produced by Thales and code produced by UTS students through the Industry Studio collaboration Thales has with UTS Engineering and IT Faculty.

The dustpan was just a typical dustpan, but before long it would have its moment to shine/scoop.

Here’s a first-hand account of the events that unfolded from one of our engineers Aaron Di Noia; who just so happens to be leading the project with UTS.

During the rescue mission 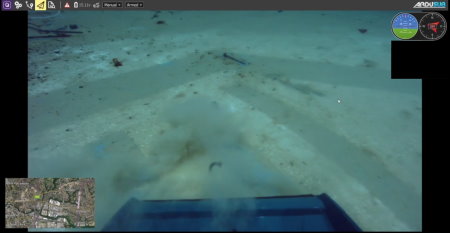 Once we were in the Acoustic Test Tank we performed our pre-dive checks and then we were ready to dive! We deployed the ROV through the floor and lowered it into the water using rope & its tether.

Looking at the display it felt like we exploring a hidden underground cave or some kind of secret underwater base; a very different perspective of the Test Tank, that’s for sure! The plan was to push the item to the wall edge before trying to scoop it up. Once we arrived and hit the bottom floor for the first time, a wave of dust came off the pool bottom and a round of laughs went around the room – that’s when we begun to truly understand just how much dust was settled at the bottom. As we conducted the operation, dust continued to fly up and obscure our vision; at times the dust cloud was too thick for us to see anything at all and we’d have to drive the ROV upwards out of the cloud in order to regain our bearings. It was a great experience that helped us better understand what it would be like to be an ROV operator working with sandy environments and minimal visibility out in the ocean.

Eventually we were able to adjust our eyes to the murky waters and managed to push the item over to a wall and, after a few attempts and about 20 minutes, it was scooped into the dustpan.

Once back at the surface, a boat pole was used to fish out the item and retrieve it out of the pool- success! There were smiles and happy faces all around, and there was a great sense of achievement among the team in being able to utilise the ROV for a real-life rescue mission.

Now the ROV is headed over to UTS for some collaboration work with undergraduate engineering students as part of the Industry Studio Project. Here the students are working on implementing some autonomous behaviour onto the vehicle so that it can think, move and react to the world around itself without human assistance. This forms part of their final demonstration for the project for Autumn Semester 2021 and will become foundations for future students to continue building upon into Spring and beyond. We’re excited that we can play a role in enriching their university experience and give them a taste of what a career in Engineering could look like.