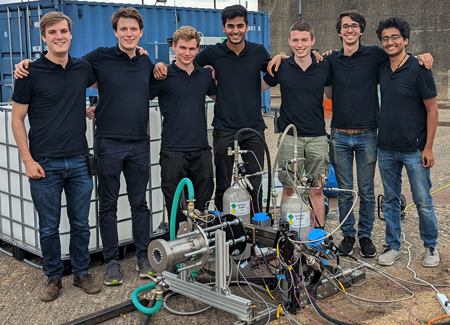 Thales in the UK is thrilled to announce its sponsorship of Cambridge University Spaceflight (CUSF). The student society’s ambitious goal is one Thales is very happy to get behind: to be the first European student team to send a rocket, its single-stage rocket, Griffin 1, into space to the dizzying altitude of 150km. This is well beyond the imaginary boundary between Earth’s atmosphere and the beginning of space – the fabled Kármán Line – which sits roughly 100km above sea level.

Thales joins Horage and TTP as a headline sponsor, as well as other supporters of CUSF including Reaction Engines and Nexus Aurora. Our involvement also goes one step further as Thales is sponsoring CUSF Co-President, Abhi Pandit, on the Institute of Engineering & Technology’s Diamond Jubilee Scholarship programme.

CUSF was founded in 2005 and initially focused its efforts on reaching the edge of space using a series of high-altitude balloons called Nova. The aim was to explore high-altitude flight and, ultimately, use the platform to launch a rocket into space.

Alongside its high-altitude balloon programme, CUSF has also been working on high-powered rocketry and, since 2012, there have been three launches, including the Martlet 3 boosted-dart rocket.

After the Martlet 3 launch in 2019, CUSF decided to take on the ambitious challenge to develop its own engines for future flights, resulting in Pulsar, the UK’s largest nitrous oxide hybrid engine.

Successful test firings of Pulsar, saw the team keen to push the boundaries of student space endeavour by developing a more complex bi-propellant engine – one they could use in the space-shot Griffin Programme to go beyond the Karman Line.

Since 2019, CUSF has been working on a scaled-down liquid bi-propellant engine demonstrator that will be tested at the end of November 2022. Named White Dwarf, it will be the first liquid rocket engine fired by Undergraduate students in the UK.

A test firing in early February will provide valuable insights into test procedures, safety precautions, and performance characteristics that’ll be needed for tests of the full-scale White Giant engine and eventual launch of Griffin 1 into space in July 2024.

CUSF’s White Giant engine promises to be one of the largest student liquid engines in the world. Powered by liquid oxygen and isopropyl alcohol, it will generate around 32kN of thrust for over 40 seconds – enough to take the rocket well beyond the Karman Line.

Along with our fellow sponsors and partners, Thales in the UK is looking forward to supporting CUSF and getting behind the student Society’s detailed, scoped-out plans to achieve its ambitious goal of being the first European student society to launch a rocket beyond the Karman Line.

Abhijit Pandit, Co-President, Cambridge University Spaceflight said “Our purpose as a Society is threefold. One, we’re here to inspire the next generation with a project that is really exciting and personally fulfilling. Two, provide our members with a real-world experience on a real-life project. And three, to help them develop the skills they’ll need to pursue a career in the engineering and aerospace industries. Having partners like Thales, one of the UK’s leading innovation companies, is crucial to helping us achieve all those aims.”

Paul Gosling, Chief Technology Officer, Thales in the UK said "It’s great to be supporting CUSF. The team’s ambition is quite remarkable and their  commitment as a Society to inspire the next generation of engineers is close to our hearts at Thales. I, for one, will be following their progress closely in the coming months as they look to become a world first in student space flight.”

You can find out more about Cambridge University Spaceflight’s journey into space here.