Next to terror attacks, ballistic missiles are amongst the real threats for strategic targets across the world. Globally deployable BMD-enabled defence systems against such threats are mandatory.

Ballistic missiles are large, extremely fast and fly very high and must be tracked to very great heights during passage. To combat them or take other appropriate counter measures it is important for these missiles to be detected and identified over large distances. To this end, Thales has developed SMART-L EWC.

SMART-L EWC (Early Warning Capability) is an upgrade of the proven SMART-L system. The long range radar system is used by the German Navy and many other European navies. Today’s SMART-L long range radar can automatically detect, record and track more than 1000 aerial targets simultaneously at distances up 400 km.

Using the EWC upgrade this radar becomes BMD-capable and can effectively be used for an early warning against ballistic missiles. Using latest waveform technologies and algorithms the reconnaissance range compared to the SMART-L is increased manifold, enabling for fast targets and those in space also to be tracked. SMART-L EWC is a fully digitalised AESA radar in the L band with a range of 2000 kilometres to track up to 1000 aerial targets simultaneously. SMART-L EWC is a programmable radar which can be flexibly upgraded with additional functions at any time. Tests at the Dutch Thales site Hengelo at the end of 2016 demonstrated that a satellite at a distance of 2000 kilometres, which moved at a height of 700 kilometres from the Western part of the island up to Portugal, could be tracked.

For large land-based radar this range is nothing new, but it is for the much smaller ship radar. Thales is the first company globally with such a powerful product.

SMART-L EWC is capable of supplying sea and land-based weapons systems with early high precision target data to enable operators within complex systems to take timely decisions to ensure the effective combating and destruction of ballistic missiles. SMART-L EWC offers an available contribution with no associated risks within an acceptable cost frame to the Ballistic Missile Defence (BMD). 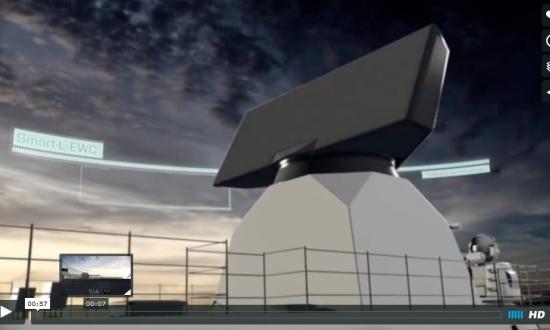 SMART-L EWC
Video ansehen
The Dutch Navy will for the first time equip four LCF frigates with the SMART-L EWC from 2017. The German Navy also aims for this early warning capability on the basis of F124 sensors.

This year another BMD demonstration has been planned in which Thales will once more participate. During the “Formidable Shield 2017” a ballistic missile with a range of 1000 km is to be combated via remote launch.

In 2015 the SMART-L EWC system could already demonstrate its BMD capability during the “At Sea Demo”, a life firing demonstration at sea.

Aerial defence and airspace surveillance are important tasks for both deployment and national defence. With its extensive radar and guidance system competence, Thales assumes an internationally leading position. New challenges can only be managed with superior sensors and processing. Therefore, Thales is ideally prepared for future procurement programmes and can offer attractive solutions which are almost all available “off-the-shelf”.