In just a few decades, satellites have emerged as a vital tool for climate monitoring and weather forecasting. In Europe, Thales Alenia Space, the key player in the sector, is focused on continuously improving the speed and accuracy of weather forecasts, to provide more effective protection for people and property.

Climate phenomena like storms, floods and heat waves are becoming increasingly frequent and severe, causing significant human casualties and extensive damage. To quote just one statistic, violent “convective” storms caused around 35 billion euros’ worth of damage in Western Europe between 2007 and 2017.  Improving our knowledge and understanding of the earth’s climate is therefore hugely important, in both human and economic terms, across vast swathes of human activity, including transport, agriculture, tourism, and urban planning.

As global warming and climate change have emerged as major concerns, the science of climatology has taken centre stage, with satellites playing a pivotal role by providing short-term forecasts and observing long-term environmental shifts on Earth.

Along with telecommunications, meteorology has been one of the principal beneficiaries of the “satellite revolution” of the early 1970s. Having become more affordable and capable of carrying more sophisticated payloads, satellites in geostationary and low Earth polar orbits now continuously monitor the planet, providing increasingly valuable and sophisticated information to meteorologists.

The effort to monitor global weather patterns and produce forecasts is coordinated on an international level through World Weather Watch, a collaborative body that brings together meteorologists and scientists to exchange data and models in order to improve forecasts and better predict potentially hazardous weather systems.

At European level, the development and use of meteorology satellites is led by Eumetsat, which designs each mission, operates the satellites and disseminates their processed data to all member states, in cooperation with the European Space Agency (ESA).

The European system includes geostationary satellites (Meteosat), which provide permanent observation of Europe and Africa, and are mainly used for “nowcasting” applications (short-term weather predictions with a particular focus on potentially dangerous, rapidly-evolving weather phenomena), and polar satellites (EPS), which are closer to the Earth, and provide high value inputs to numerical models used for longer-term predictions, but with a much lower revisit rate. 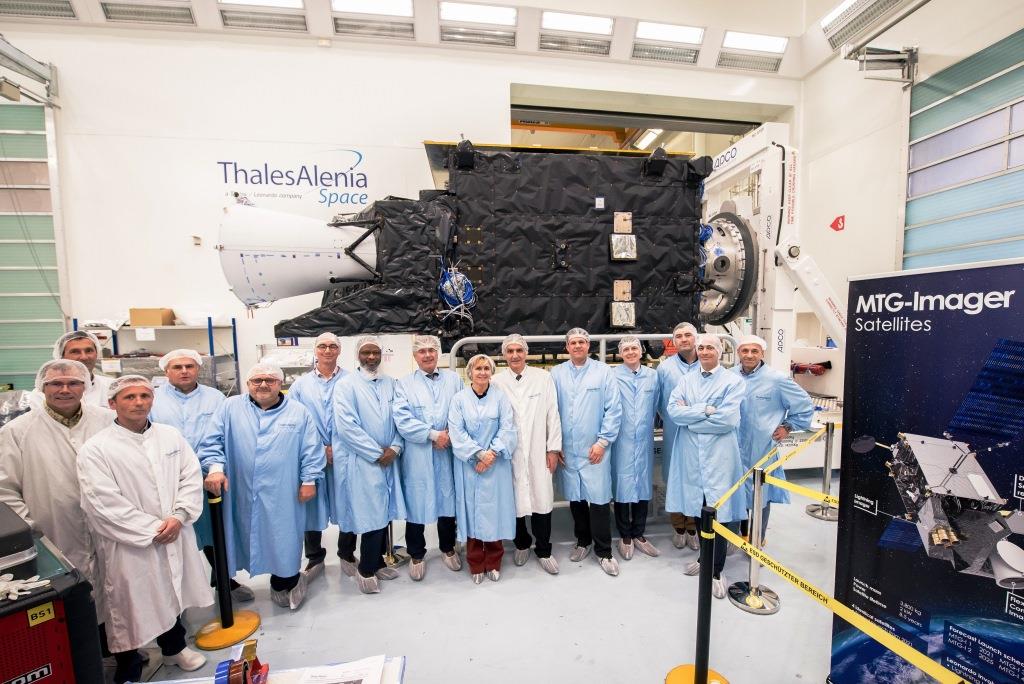 The MTG programme – worth more than 4 billion euros – encompasses six geostationary satellites (four imagers, and two on atmospheric sounding missions) which, like their predecessors, will scan Europe and Africa from 37,000 kilometres above the Earth’s surface. The launch of the first satellite is scheduled for 2021.

The many advances offered by these gems of technology include a hyperspectral infrared sounder, which delivers a genuine minor revolution in the field of high-resolution observation.

“The resolution provided by current satellites, which stands at 3 kilometres per pixel, will be boosted to 1 kilometre! Plus the image refresh rate will be cut to ten minutes, from 15 minutes today,” explains Antoine Rerolle, MTG-Imager programme manager at Thales Alenia Space.

MTG satellites will feature another first-of-a-kind technology in their payload: a lightning imager which will provide “nowcasting” and short-term forecasting as well as early warning capabilities. The data from the imager will obviously be shared with the 30 Meteosat member states.

The images captured from the earth’s atmosphere will be processed at impressive speed. “The lightning imager will be capable of processing data at 48 gigabytes per second. The extremely powerful onboard processing system will only transmit key data back to earth,” adds Antoine Rerolle. This data will provide precious insights into potentially dangerous, rapidly evolving weather phenomena, such as storms.

The construction of the Meteosat satellites is just one element of Thales Alenia Space’s contribution to climate study and observation. Its Jason and Sentinel satellite series, for example, continue to provide vital ocean observation data, and the firm’s undisputed world leadership in space altimetry has led to its instruments being chosen by all the world’s major space agencies.

Space meteorology now plays a huge role in the global economy. A study conducted a few years ago showed that, for every euro invested in space meteorology systems, there is an economic benefit of more than €10 across all sectors. Which goes to show that the key to securing the planet’s future is to…reach for the stars.

Thales is also making a crucial contribution to NASA’s ECOSTRESS project, which monitors water availability on earth, and the impact it has on the biosphere and the global carbon cycle. The infrared detector used in the monitoring is mounted on the International Space Station; Thales Cryogenics delivered cryogenic coolers to keep the equipment at minus 208 degrees Celsius, thus allowing it to record this vital data!

The European Space Agency’s Euclid deep space probe telescopic satellite, with Thales Alenia Space as prime contractor, will map billions of galaxies to unlock the mysteries of the universe.

Precision surveillance by increasingly-powerful oceanography and weather observation satellites is delivering some priceless insights. Read on, for more about Thales Alenia Space’s specialised satellites and what we’re finding out. ...

Today, we can see all the layers in the atmosphere. We can analyse them for temperature, pressure, and gas concentrations. We can detect changes that are the origin of storms, and we can provide advance warning of the kind extreme weather that climate change appears to ...