From Barr and Stroud to now: 100 years and beyond of Thales periscope technology

In 1888, Professor Archibald Barr and Dr William Stroud, in response to a tender issued by the War Office, submitted an application for an optical range-finder patent to the Patents Office. This patent would both cement the collaboration between Barr and Stroud and, from 1917, form the core of the next 100 years of Thales’s periscope development.

Between the years 1888 and 1915, Professor Barr and Dr. Stroud expanded their business to become the number one range-finder company in the UK; developing a reputation for technical excellence in range-finding technology.

The inter-war period from 1919 – 1939 marked a time of technical innovation and customer growth for the Thales periscope business including the Royal Navy’s first true binocular periscope; the CK1, which made watch keeping for extended periods much easier. On the export front, Thales’s customer list expanded to include a range of countries including France, Poland, Spain and the USA. 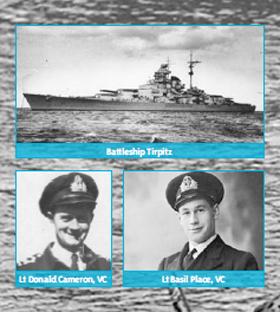 During the defence of Britain in WWII, one of the most incredible missions of this period, Operation Source, took place in September 1943 when a small group of X-Craft midget submarines, each fitted with a single Thales CL8 periscope, attacked the 52,000 ton German battleship Tripitz in Kåfjord in northern Norway. The mission resulted in the Victoria Cross being awarded to Lt. Donald Cameron, the commanding officer of X-6 and Lt. Basil Place, the commanding officer of X-7, both of whom subsequently visited Glasgow to thank the workforce for their efforts.

After the Second World War, as the world moved into the Cold War era, submarine operations highlighted the need for periscopes optimised for surveillance and intelligence gathering roles. The CK24 Search and CH74 Attack Periscopes fitted to the Royal Navy’s diesel electric Oberon Class Submarines provided the benchmark.

From the late 1960’s through to the early 1980’s, the Royal Navy acquired unprecedented levels of operational capability with the world’s first thermal imaging periscope (CH82) and the world’s first laser rangefinder periscope (CH80). The change to an electronic system set the standard for the future and provided the basis for subsequent leading edge sensor upgrades, ensuring the Royal Navy maintained its world class operational capability.

In the mid to late 1980’s, the Royal Navy’s Upholder Class (now the Royal Canadian Navy Victoria Class) CK35 and CH85 periscopes introduced remote control of key functions such as elevation and depression of line of sight, image magnification, range measurement and periscope rotation. Imagery from thermal imaging and TV sensors could now be controlled and displayed on screens in the control room and made available to the entire command team, not just the commander. Fully implemented on the Collins Class CK43/ CH93 periscopes and Vanguard Class CK51/ CH91 periscopes during the early to mid-1990’s, remote control technology had finally reached a level of maturity to enable the next generation of above water sensor systems – the optronic mast.

In 1998, Thales’s first CM10 optronic mast was sea-trialled on HMS Trenchant and brought about a significant change in the Royal Navy’s above water visual system capabilities. Today, each Astute Class submarine has two Thales CM10 optronic masts, each fitted with a fully integrated ESM/EW sensor package and with TV, thermal imaging or images being remotely controlled and displayed on consoles within the control room.

By 1991, Barr and Stroud Ltd. become known as Pilkington Optronics Ltd., which in turn in 2001 became part of the modern Thales UK, whose optronic business is housed in the same city where Barr and Stroud lodged their original patent in 1888 – Glasgow. Now, with more than 600 people working in the optronic area of the business, Thales is proud to continue the work that was started in this part of the United Kingdom over 100 years ago.

In August 2017, Thales celebrated 100 years of trusted partnership with the Royal Navy, through being their sole supplier of periscopes/optronic masts since 1917. Thales’s work in the field of above water visual sensor systems has provided the Royal Navy, and many of Thales’s international customers, with an enhancement in their operational capabilities.