Exploring the Solar System from a field in Suffolk 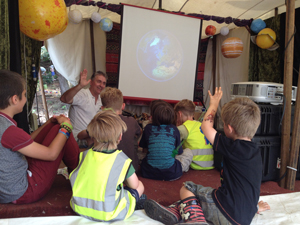 With the British Summer in full swing, Latitude festival (16-19 July) is celebrating its tenth birthday and attendees can look forward to an unforgettable party in the Suffolk countryside. However, they may not be expecting to learn about the solar system during the four day event too…

Our Tiny World is returning to the Latitude Kids’ Area for the third year running, introducing astronomy to young festival-goers, and quite a few adults too.

Devised by Derek Langley, Thales UK STEM Ambassador, Our Tiny World takes budding scientists on a virtual tour of the solar system. Shows are fun and hands on, and children as young as five can take part in a group activity to rescue a space mission!

Our Tiny World will run throughout the festival, with a handful of shows every day. A number of school groups have already registered and drop-ins are very welcome too.

“As it’s Latitude’s tenth anniversary this year, Festival Republic has reached out to local primary schools and we’re likely to be really busy over the weekend. I’m already fully booked on Friday, which is unprecedented! I’m also organising a night time stargazing session where, weather-permitting, we should be able to see Saturn and its moons.”

Our Tiny World started life in December 2010, when primary school St Edmunds CPS approached STEMNET in need of a STEM (science, technology, engineering and maths) ambassador to take part in their Space Week. Derek created and presented four exciting and interactive sessions at the school, teaching Key Stage 1 & 2 classes about the universe. 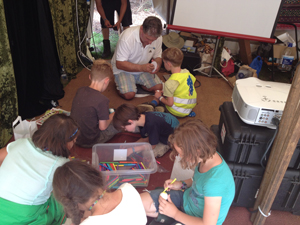 Claire Martin, Head of Science at St Edmunds CPS, says: “The children loved having Derek in school. They were learning about space over the half term and this was a great finale. The children looked at aerial pictures of the school that gradually moved higher and higher until they reached space. They then made hats with planets on and Derek took us into the hall to make a human solar system – it was great fun! I would recommend any school to work with STEMNET and the STEM ambassador network.”

The popularity of Our Tiny World is testament to the STEM ambassador approach, where children are introduced to Key Stage science, technology, engineering and maths in a less academic environment.

Thales UK is proud to support its STEM ambassadors, all of whom are looking to share their passion for STEM and pass on their knowledge to the next generation of scientists and engineers. If you would like invite a STEM ambassador to your school or group, please contact Eve Maywood.