According to Welsh government statistics, there were an estimated 267,000 enterprises active in Wales in 2019. 99.4% of those are Small to Medium-sized Enterprises (SMEs). Together, they account for 62.4% of our jobs, employing around 1.2 million people and generating a combined annual turnover of £122.5 billion.

Clearly, SMEs are hugely important to the regeneration of the Welsh economy. But there could be clouds on the horizon.

Earlier this year, the National Cyber Security Programme revealed nearly half of UK businesses experienced at least one cyber-attack in 2017 and 66% of SMEs were shown to have been victims. Remember that number. You get better odds flipping a coin.

And according to a blog on the Welsh Government’s Business Wales web site, a new poll of SMEs revealed that the majority are either confused by or unaware of the rules around the General Data Protection Regulation (GDPR). Even more frightening, more than eight out of ten don’t see cyber-attacks or data loss as a ‘significant’ risk for their business.

I don’t know what they think ‘significant’ means. But we have to assume that they can afford to lose their reputation, and data, and up to 4% of their annual turnover (the fine for not complying with GDPR).

All of these SMEs have a heavy reliance on the digital world. And as the world moves to Industry 4.0 – an era where everything will be connected to everything else – and technology is used even more heavily to link people and businesses together, vulnerability to cyber-attacks rises proportionately. 66% might be just the beginning.

I hope that as the world moves to industry 4.0 and digital transformation, new and safer ways of working will gradually become the norm. A lot of security will be built into the systems and processes that we use within and beyond our own enterprises. But we’re not there yet. So until then, it’s up to each of us to stay safe by following best practice.

That’s something that informs everything that we do at the National Digital Exploitation Centre (NDEC). NDEC is a world-class technology hub in Ebbw Vale, about 30 miles north of Cardiff. A collaboration between the Welsh Government, the University of South Wales and Thales – a global tech company and cyber security specialist – its mission is to defend manufacturers of all kinds and sizes from a worrying rise in cyber-attacks.

As a business, Thales provides and advises on cyber-security for large manufacturers, critical national infrastructure, the government and the military. This is proper, full on, big league stuff. But NDEC caters for a much wider audience and its remit includes educating and advising SMEs. There are four key offers for SMEs, all of which are free at the point of use.

We know what the hackers know: that there is always a way in. Believe it or not, it is usually the most obvious route because people are careless about security. It’s not hard to make a step change in the cyber security of your business. It doesn’t have to cost a fortune. In fact. it doesn’t need to cost you anything.

There’s an old joke: Two men are being stalked by a lion. One of them puts on some running shoes. “You’ll never outrun a lion,” said the other. “I don’t need to outrun the lion,” came the reply. “I just need to run faster than you.”

By taking some basic precautions you can make sure that your business is a much harder target than most of the 26,000 SMEs in Wales. Hackers, like lions, are drawn to the easiest targets.

SMEs are hugely important to the regeneration of the Welsh economy. They are more creative, more passionate and far more agile than big business. That’s a huge advantage at a time when the world is changing so quickly.

Unless you want to be one of the 66% who get attacked this year, and next year, and every year after that, now might be a good time to get a cyber security health check – for free – by the experts. 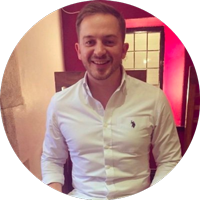 Alex Meese is helping Welsh SMEs in all industries to connect with the resources and expertise in cyber security that are offered by the National Digital Exploitation Centre. NDEC is a world-class technology hub in Ebbw Vale, about 30 miles north of Cardiff, one of few such facilities around the world. Its mission is to defend manufacturers of all kinds and sizes from the worrying rise in cyber-attacks.