Stretching for 57km beneath the Alps and completed  a year ahead of schedule, Switzerland’s new Gotthard base tunnel is the longest and deepest railway tunnel ever built. Thales’ cutting-edge signalling holds the  key to getting the most out of this vital strategic asset. 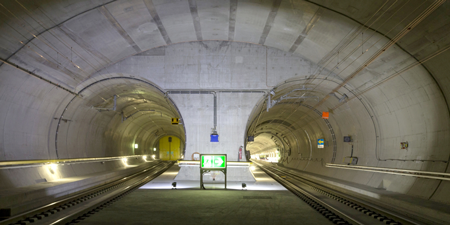 Throughout history, the Alps have stood as a formidable natural barrier to human mobility – a rocky, beautiful and in places impenetrable mountain range, curving for more than 1,000km across the heart of Europe.

A new generation of tunnels is challenging the dominance of the Alps and redrawing the map of Europe in the process. Gotthard, the newest and longest trans-Alpine rail tunnel, is the centrepiece of an ambitious programme to boost Switzerland’s rail connectivity, cut road traffic and safeguard the Alpine environment. The tunnel was built by AlpTransit Gotthard AG, a subsidiary of Swiss Federal Railways (SBB), on behalf of the Swiss federal government.

Advanced rail signalling is playing a vital part in realising the dream of high-speed Alpine transport. As partner and prime contractor of theTranstec Gotthard consortium, Thales signed a CHF 2 billion contract for the installation of railway technology on 29 April 2008. Thales not only provided the general project manager of the consortium but also staffed key functions such as RAMS management (reliability, availability, maintainability and safety), finance and head of commissioning.

“Thales’ role was to supply the overall signalling system for the Gotthard tunnel,” explains Denis Laroche, vice president, business development, Thales. “This is an electronic system that controls the trains and ensures safe operations.”

The signalling deployed in Gotthard is ETCS Level 2, which uses continuous radio communications to link the train with the signalling system. This makes it possible to run trains safely at speeds of up to 250kmh. ETCS Level 2 is a service-proven solution with a long track record: Thales implemented the same system for Gotthard’s sister tunnel, the Lötschberg base tunnel, opened in 2007.

Perhaps surprisingly, there are no signals anywhere inside the Gotthard tunnel. Instead, all the information train drivers need is provided via a cab signalling display. This is essential because conventional trackside signals cannot be reliably sighted at high speeds.

“Running trains through a tunnel with significant capacity and at high speed is a very delicate thing,” says Dr Alfred Veider,Thales’ vice president of strategy and product policy for main line signalling. “A superior train control system is absolutely mandatory.”

As well as supporting faster journeys and meeting the demand for up to 300 trains per day, ETCS is designed to enable borderless journeys across Europe with no need to change locomotives to accommodate different train control systems.

“Switzerland was one of the first countries to adopt ETCS and its main line network is a reference for the world,” notes Laroche. “Gotthard is at the heart of Europe’s railway system and it is part of the transport corridor between Rotterdam and Genoa in Italy, so the project is vital not only for Switzerland but also for Europe.”

The tunnel promises faster, greener freight movements and dramatic improvements in journey times for passengers. The new high-speed link will cut the travel time from Zurich to Milan to just over three hours – slicing 40 minutes off the current fastest trip. 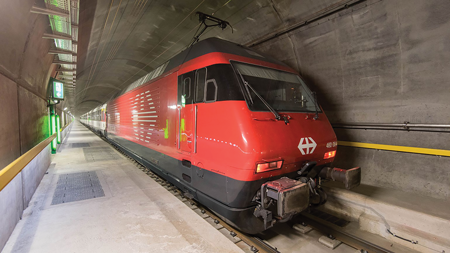 Bringing a modern railway tunnel to life is a complex business. In the case of Gotthard, there are two parallel tunnels – or ‘tubes’ – to handle traffic in each direction. Excavating and lining the tunnels 2,300m beneath the Gotthard massif took more than a decade. The job of transforming these bare concrete-lined tubes into a fully-functioning high speed railway with track, power and signalling was carried out by Transtec Gotthard – the consortium responsible for the delivery of the project. Thales played an active role in the management of the consortium.

In the beginning, “it was a great challenge to effectively bring together the different cultures and interests of the consortium partners for the greatest good of the project,” according to Kurt Sauerwein, managing director of Thales Rail Signalling Solutions.

So how do you set about turning an empty tunnel into a high- performance railway? “The first step is providing temporary installations,” explains Peter Huber, general project manager,Transtec Gotthard. “You need a 50Hz power supply, lighting, telecoms and air conditioning. We installed all of this first.”

Air conditioning may sound like a luxury in a railway tunnel. In fact, work would have been impossible without it. Heat generated by the huge overburden of rock means that the temperature inside the tunnel can reach a sweltering 46 degrees centigrade. Air conditioning and ventilation helped to get the temperature down to a more bearable 29 degrees. Track was installed first, followed by catenary – the network of overhead conductor wires that provides 15,000 volts traction power to the trains. Although many of the components are big and heavy, all were painstakingly positioned with tolerances measured in fractions of a millimetre. Signalling equipment was installed once the heavy track work was complete.

Working in the world’s longest rail tunnel comes with its own special challenges. Getting to work is one of them. “Logistics are extremely complex in projects such as this,” says Laroche. “It takes a long time for people to get to work in the middle of the tunnel, so transport has to be perfectly organised.” 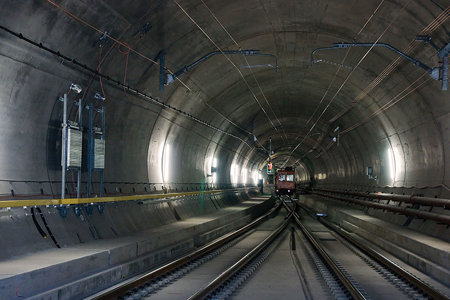 Walking to work was out of the question (it takes more than 11 hours to get from one end of the tunnel to the other) so temporary trains were provided.

For Verena Tschirner, Thales’ deputy commissioning coordinator, a typical working day would start with a rail journey to the heart of a mountain. “We used a special train to get to the centre of the tunnel which took around 50 minutes. All of the workers went on this train and returned on it in the evening.”

With up to 780 people doing different jobs in and around the tunnel at the peak of the project, careful coordination and planning were vital. “Signalling was the last piece of the puzzle,” says Tschirner. “Before you can install it, all the other pieces have to be in place, such as the radio network and power supplies. Teamwork and good communications are essential. My job was to organise all the interactions withTranstec to make sure we could create the perfect schedule.”

The collaborative approach adopted by the consortium partners paid dividends. “In spite of the complexity of the programme, we successfully delivered the whole railway system for the tunnel, includingThales’ signalling system, one year in advance,” says Huber.

“All of this was only achievable because of a highly motivated team, adds Sauerwein. “From the very start, we worked transparently and as ‘OneThales’ with our colleagues in Germany (RBC, axle counters), Austria (ELEKTRA interlocking) and Portugal (safe signalling data network).”

Smooth implementation of the tunnel signalling was helped by two things. First, ETCS requires less trackside hardware than conventional systems because no signals are needed. Second, a huge amount of preparatory work was done before implementation began. “We were already six years into the project when we started work on site at the end of 2013, so we had a good head start,” says Leif Leopold, general project manager, Thales.

Lab testing was a crucial part of the job: the signalling solution brings together several different vital systems, all of which must work together perfectly. “Testing was carried out at our dedicated lab in Zurich over a period of four years,” explains Leopold. “This allowed us to simulate the operation of the new rail link while the tunnel was still being built.”

Basing the test lab in Switzerland contributed to the success of the project, says Leopold: “It builds trust and makes for a good working relationship with the customer. We also had very few changes in our core team over the eight years of the project – keeping the same expert people together is very important.”

Signalling systems such as ETCS Level 2 are designed to route and control trains, maintain safe separation and prevent conflicting movements. In very long tunnels, however, the confined environment means something extra is needed to protect passengers in the event of an emergency. In the case of Gotthard, the solution was to install an emergency tunnel automation system. If a fire is detected, for example, the system kicks in within seconds, initiating an intelligent evacuation of the tunnel that takes into account the state of the traffic and the location of the hazard. “The system’s algorithms work out the best evacuation plan far quicker than a human being,” says Leopold.

Developments of this sort underline the way that signalling is becoming a focal point for innovation. Tunnel safety is one example. Capacity enhancements are another. Integrating signalling and traffic management, for example, allows operators to predict and resolve traffic conflicts long before they cause disruption. “Traffic management makes it possible to get the best out of the network every day,” says Veider. “This is a new source of value for operators and Thales is positioned very well in this field.” 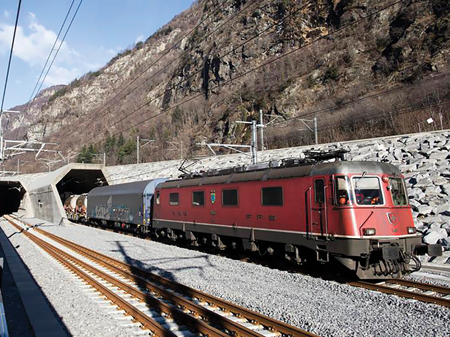 Future developments promise even greater efficiency gains. ETCS Level 3 – the next evolutionary leap for rail signalling – will introduce ‘moving block’ technology to main lines, allowing operators to run more trains on the same track. To do this, trains will need to be able to determine their own position without trackside infrastructure.

Thales is committed to ETCS Level 3 and is actively involved in developing the standard. The Group’s expertise in both rail signalling and aerospace is a differentiator: among the technologies being evaluated are satellite positioning and inertial navigation. A Thales TopAxyz inertial measurement unit has already been successfully used to gather positioning data inside the Gotthard tunnel.

As well as boosting capacity, the introduction of ETCS Level 3 is likely to accelerate the pace of automation. Automatic train operation (ATO), for example, has been used in metro systems for more than 30 years, but remains a rarity on main lines. That could be about to change.

“ETCS Level 3 paves the way for fly-by-wire operation for trains,” says Veider. “As soon as you have radio communications with the train, there’s much greater scope for ATO or even autonomous trains running on a radio link. And with ETCS, that radio link is already there.”