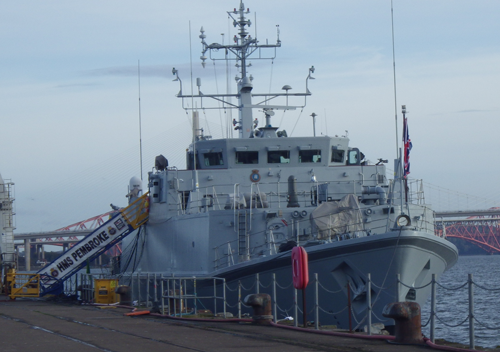 HMS Pembroke recently became the Royal Navy’s most modern Mine Counter-Measures Vessel (MCMV) after being equipped with a new state-of-the-art mine counter-measures Command System.

The new generation of command and control system that Thales is deploying across the entire fleet of Royal Navy Minehunters under ORCA is known as M-cube. M-Cube enables the Royal Navy to continue delivering on its front-line commitments with a modern, capable and open mine hunting system. The contract is of strategic importance to Thales and demonstrates our determination to stay at the forefront of combat mission system technology.

The contract also includes training for Royal Navy personnel, a five-year in-service support plan and, for the first time a land-based test site to enable the development of future technologies and algorithms ashore.

Stephen Rowe, Underwater Systems Director – Mine Countermeasures, praised his team for its continued dedication during these testing times:

“Our colleagues have shown outstanding determination to provide the Royal Navy with a world class capability. Working in extremely challenging circumstances, the team played a critical role in supporting the successful sea trials with the customer recognising the ‘massive accomplishment’ of everyone involved." The Thales team received the ships plaque in appreciation of everyone’s contribution.

Jo Osburn, Head of Maritime Combat Systems at Defence Equipment and Support, said: “ORCA has been a great achievement made possible through working as an enterprise and is a key landmark in delivering increased agility to the frontline Warfighter by taking a more open systems approach. With Initial Operating Capability now achieved, I look forward to the Hunt fits and Full Operating Capability across the mine countermeasures fleet.”

HMS Pembroke has now been approved for operational use and has re-joined the fleet of vessels carrying out vital minehunting operations.