What is electronic warfare and why does it matter?

The feeling of anticipation and excitement grows. Tension begins to peak.

The muffled sound of chatter and rustling papers creates a low din around the room.

A cacophony of sounds suddenly reverberate around the room, causing the windows to shake.

One man stands at the centre of it all - everyone’s attention turns to him.

He raises his arms, as if he is about to surrender, but his fingers begin to curiously motion. The short staccato notes of a violin begin to fill the room, while the French horn booms and the bassoon deeply throbs.

Ian Greer, Chief Engineer at Thales, said: "Think of Electronic Warfare (EW) as listening to classical music. What we are trying to do is take the composite signal environment - the orchestra - and tease it apart into its individual components to create the intelligence picture."

“Just like we can hear individual instruments within the ensemble of an orchestra, by analysing what devices are harnessing the electromagnetic spectrum (EMS) we can begin to plot what ships, aircraft and devices are in range and classify them as friendly, neutral or hostile. This intelligence then gets fed back into the command so that they can make key decisions.”

It is knowing who, and where your enemy are; what they are saying, and what their objectives are - whilst trying to stop them hearing or seeing you.

Thales’s EW solutions enable clients to detect the enemy, optimise tactical situational analysis and gather critical intelligence so that they can gain the strategic advantage in offensive or defensive operations.

“Ideally it is a calm process. However, the equipment also provides you with a warning if you have missile lock-on, which is when you have got a missile inbound, pointing at you - and it does tend to get a bit more hectic when that happens,” said Greer without a hint of irony. 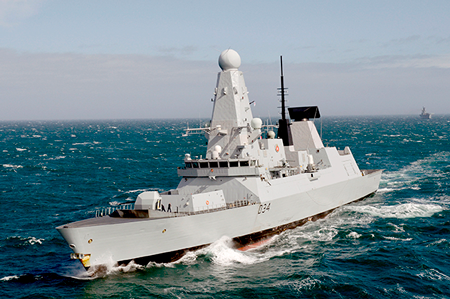 Missiles are deadly assassins, that represent a nightmare scenario in modern combat when the stealthy killer becomes visible on a radar screen. Royal Navy Type 45 Destroyers have the ability to thwart these deadly menaces and provide protection for the entire naval fleet by utilising Thales’s cutting-edge EW technology.

In a situation when every second counts, Thales’s automated library of signals enable EW operators to identify the threat and put the correct counter measures in place that will enable them to defend against the attack.

Using Principle Anti Air Missile Systems, T45 Destroyers have the capability to knock aerial threats out of the sky that are up to 70 miles away. Defensive measures can also be employed, such as moving out of range from a threat, or triggering decoys that confuse an enemy’s missile guidance system and seductively lure them from the target.

It is for this reason that EW is listed as a military ‘primary one sensor’, which means that, unlike communications, radar, or sonar, it can never be turned off. It must always be alert and ready to trigger a warning, should a threat occur.

There are no hard weapons on the end of it, EW doesn’t kill anyone, it protects all of us.

Protecting all of us

Phil Ventress, who served in the Royal Navy for 27 years before he joined Thales in 2001, said: “EW is what they call soft kill. There are no hard weapons on the end of it, EW doesn’t kill anyone, it protects all of us. You stop the missile coming onboard and you kill the missile – but you don’t kill anyone.”

Thales’s EW capabilities are not limited to Naval, but constitute the land, sea and air. For years the UK military has relied on Thales’s EW equipment to save the lives of many service men and women, by helping to protect against hostile intent from a range threats, from Improvised Explosive Devices (IEDs) to hyper-sonic Anti-Ship missiles. 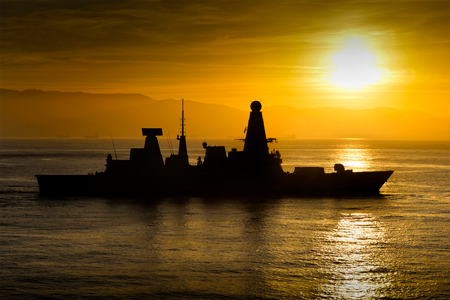 However, new threats are being developed all the time and not everyone has access to the latest lifesaving technology.

Anti-tank missiles have been used by groups in the Middle East to sink ships at sea, such as the former USS Swift, which was being operated by the United Arab Emirates (UAE) Navy in Yemen where over 13,500 lives have been lost in the civil war that has raged over the past three years.

Arab coalition forces battling the Houthi said the UAE ship was on a humanitarian mission when it was attacked, which meant that it was unarmed and had no military protection.

Ventress, who is now Head of Strategy and Product Policy at Thales, said the ship may have been able to protect itself if it had EW capabilities and fewer lives could have been lost.

Today, the main challenges facing the military arise from irregular forces and criminal groups that are using guerrilla tactics to create deadly and destructive weapons like IEDs, or hybrid weapon systems that utilise a mix of technology.

Relatively little intelligence exists on these weapons strengths and vulnerabilities. As a result, surveillance and monitoring in high risk areas like the Middle East is becoming increasingly important, so that intelligence can be developed that will enable protection measures to be put in place to defend against these deadly capabilities.

Ventress said this will ensure that EW will continue to save thousands of lives now, and long into the future.