The Maritime Mine Countermeasures Programme: the French and British navies blaze the trail towards a global first with their revolutionary autonomous system

Mines’ reputation as a “poor man’s weapon” has reached new levels in recent years: they’re increasingly cheap, sophisticated, and deadly—making them highly attractive in a world where criminality and terrorism now rival threats from enemy superpowers. While mines potentially menace everyone at sea, dealing with them effectively is vital in keeping key trade corridors open and guaranteeing maritime access and force projection—especially for countries with highly valuable assets like aircraft carriers and nuclear submarines.

Faced with exactly this threat, France and the UK have set out a clear vision for the future of mine warfare: to improve performance—from detection to neutralisation—and to do it while making personnel safer and controlling costs.

Recognising the clear alignment of their objectives, in 2015, the countries fired the starting gun to embrace a new, unprecedented concept of operations: the Maritime Mine Countermeasures (MMCM) Programme. The ambition? By 2020, to be operating a sophisticated system comprising a tailored, toolbox of autonomous seaborne drones. This includes Unmanned Surface Vehicles (USVs), a super-performing new sonar (SAMDIS) carried by Unmanned Underwater Vehicles (UUVs) or towed by USV, and Remotely Operated Vehicles (ROVs). Remotely controlled by expert operators from a Portable Operational Centre (POC), these would break new ground in collaboration and autonomy. The solution would also be highly portable—being flown to mined areas in hours, rather than having to sail there over weeks—when needed to support distant coalition operations.

Delivering such an ambitious concept is deeply complex: it means identifying the best in autonomous systems and integrating them into a reliable, safe and cybersecure “system of systems”—while still meeting exacting criteria on timescales and value.

Following competitive tendering, the navies chose Thales to help them realise their bold vision. As the world leader in conventional MCM (supporting over half the world’s anti-mine vessels—with over 300 systems in service) and with proven experience of unmanned technology, it could offer unique expertise—drawing on an extended network of 80,000 employees operating across 68 countries . In addition, its clear systems development process gave it the flexibility to partner with specialist providers (often SMEs) to offer a platform and toolbox that would exactly meet the navies’ needs. And, with fields like Cybersecurity, Artificial Intelligence (AI), and Human-Machine Teaming (HMT) advancing rapidly, the company’s strategic investment in digital would enable design for tomorrow’s possibilities too.

Building on these strengths, Thales put in place a customer-focused structure that would underpin the programme’s success. This included a handpicked and fully balanced Franco-British team, a new Maritime Autonomy site at Plymouth in the UK—in addition to the one established at Brest in France, and a programme and supplier management regime designed to operate seamlessly across several countries.

The navies have developed a high level of trust in Thales, whose commitment to the project has seen it invest heavily in R&D as well as offering advice to help refine the programme timetable. It’s trust that has proved well placed: milestones on the road to 2020 have been met, the systems built, and recent, at-sea trials have seen the navies judge that they already have a “first-in-series” system rather than a prototype. This solid progress bodes well for MMCM’s trials on more complex operational scenarios due shortly, delivery of the first full system in 2020, and the long-term safety and effectiveness of the two countries’ naval personnel.

“We have seen this week a really powerful demonstration of the potential that Maritime Autonomous Systems have in delivering Mine Countermeasures around the world … The UK/FR MMCM programme has demonstrated many elements of these systems in the water and working together. A very positive demonstration, and we look forward to receiving the first complete MMCM system for further operational evaluation early next year.”

“This first of its kind MMCM system of systems has successfully started to demonstrate its outstanding technological capabilities: its underwater unmanned vehicle will operate deeper and more discreetly than those currently in service, its unmanned surface vehicle fitted with a highly accurate towed sonar will complete missions faster and nimbler, and its advanced remotely operated vehicle will defeat mine threats quicker thanks to its three accurate ammunitions. This marks a significant leap forward in MCM methodologies, capabilities and future direction, whereby removing the man from the minefield. OCCAR, managing the MMCM Programme on behalf of France and the United Kingdom, will deliver a prototype to each of its customers early next year, as they expect. These systems will provide the Royal Navy and Marine nationale with maritime force projection and maritime security capabilities, at the time and place of their choice, in support of a wide range of naval operations.” 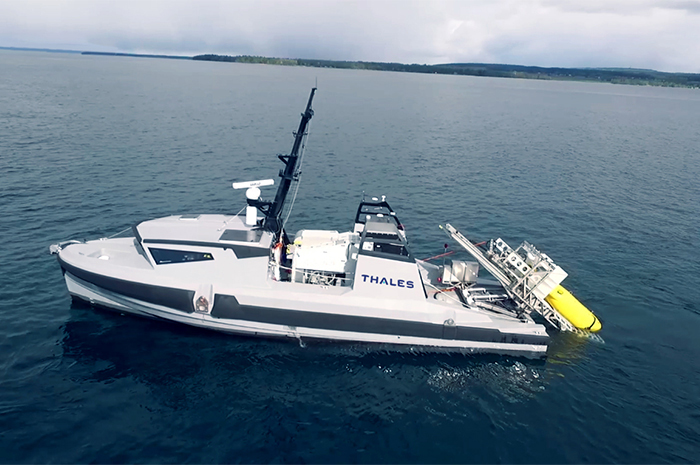