A jewel of technology in the sky!

If it was once true, as the adage has it, that ‘everybody talks about the weather but nobody does anything about it.’, that is no longer the case today; the newest generation of ‘eyes in the sky’ weather satellites is indeed making it possible to do something about the weather, both in the short term and the longer term.

In fact, the two of them are connected, as climate change is generating more extreme weather.

In the short term, today’s weather satellites are sending back to Earth near real-time precision images that give earlier than every warning of dangerous weather in its formative stages, providing people more time to protect themselves and their surroundings.

In the medium to longer term, satellites tracking the change in the atmosphere and the oceans  are revealing critical clues to scientists on climate change and global warming so that public policy can be informed to respond before it is too late.

The revolutionary insights from today’s weather satellites can be measured in performance of both quality and quantity of images.

A Big Breakthrough through 3D Imaging

Sandrine Mathieu is Product Line Manager for Meteorology and Oceanography at Thales Alenia Space. The company has been prime contractor of all of Europe’s geostationary weather satellites for more than four decades and, as leader in satellite meteorology, is today developing a new generation of earth observation satellites for Europe. Thales Alenia Space led the manufacturing of 7 Meteosat satellites in addition to 4 MSG (Meteosat Second Generation) satellites. The company is now working on the third generation (MTG) ,partnering with OHB. This latest generation includes 6 satellites: 4 imaging and 2 sounding satellites which explore the internal dynamics of the atmosphere. 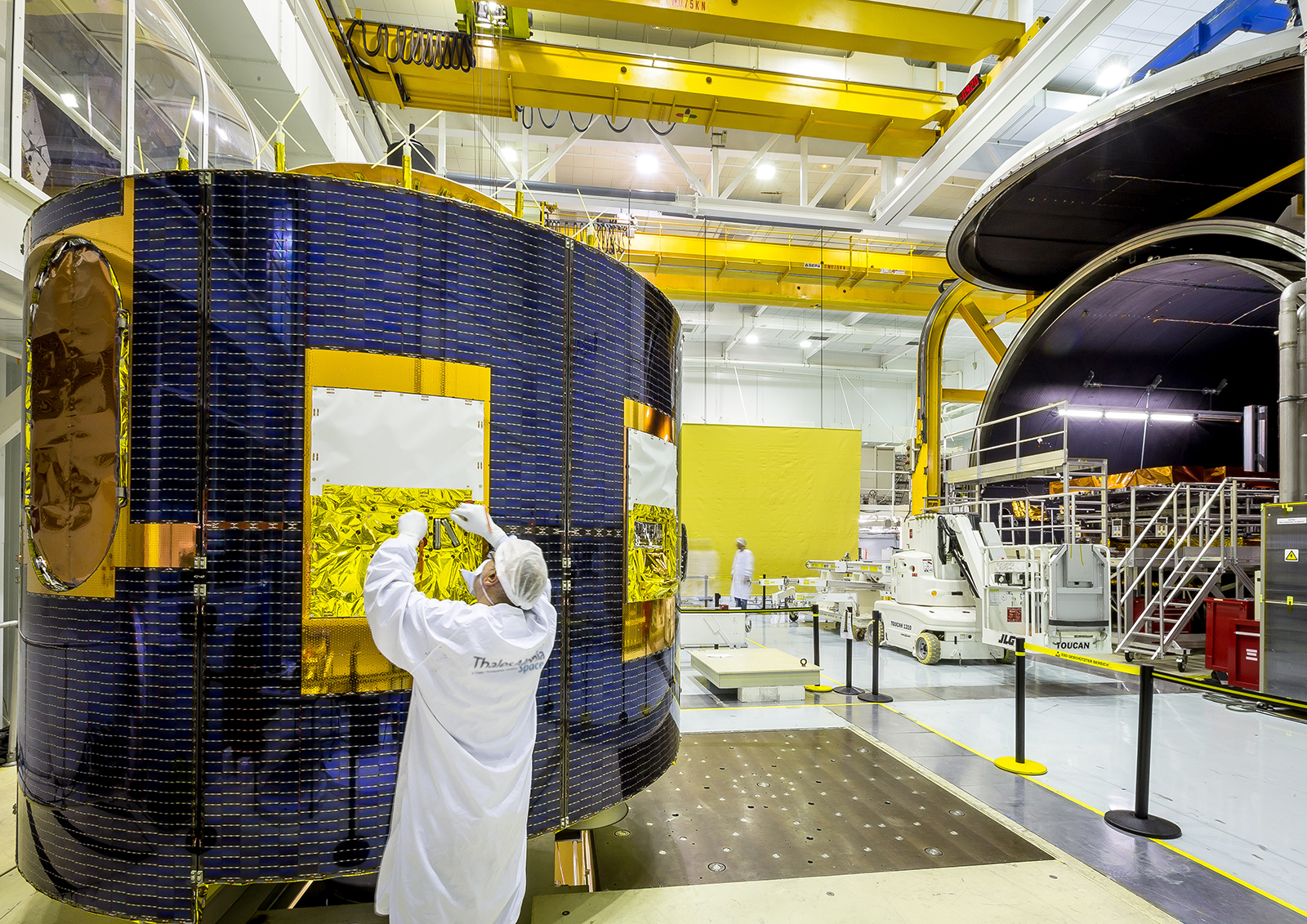 Sandrine Mathieu says, “Think of the atmosphere as a ‘millefeuille’ French pastry with layers and layers. Up until recently, we were only able to see the top layer. Today, we can see all of the layers to analyse them for temperature, pressure, and gas concentrations such as oxygen. This allows us to detect the changes that are the origin of storms, providing much more advance warning of extreme weather which climate change appears to be generating more frequently”.

So it’s not surprising that she compares this Thales Alenia Space 3D weather observation technology in value to “the difference between an x-ray and a body scan for a medical diagnosis”.

The company’s advances in satellite radar and optics are also behind the continual improvement in the quantity and quality of the images which weather satellites are today able to generate more quickly and with more useful information.

From thirty minutes between images when the first generation of satellites was launched to today’s ten minutes and, soon, an image every one or two minutes.

From a maximum resolution of five kilometers to 500 meters today.

The new Sentinel family for Europe’s Copernicus program of environmental monitoring and management aims at achieving the most ambitious satellite belt for a global, continuous, autonomous, and high-quality wide range Earth observation capacity. In the framework of that program, Thales Alenia Space is now prime contractor for Sentinel-1 and -3 satellites , with 4 models for each family. It  is responsible for the Sentinel-2 imaging ground segment and it also builds the imaging spectrometer on board Sentinel-5P satellite as well as the radar altimeter instrument Poseidon-4 on the Sentinel-6 mission.

This new generation of ‘eyes in the sky’ will benefit from other advances in performance made possible by Thales’ engineering of satellite image generation.

And so they will become a unique and invaluable tool in understanding our climate today and tomorrow.

“Soon, we will be able to record lightning in real time with European meteorology GEO satellites.” Sandrine Mathieu explains, “This also will contribute to our understanding of how extreme weather develops. Along with other insights from the new generation of weather and oceanography satellites, we can create much more ‘informed’ models for weather prediction and climate change. And so we and our partners, including the European Space Agency , EUMETSAT and agencies in many countries in Europe, can give policy-makers the information they need to address the extremely serious climate change challenges we all are facing today”.

Today, we can see all the layers in the atmosphere. We can analyse them for temperature, pressure, and gas concentrations. We can detect changes that are the origin of storms, and we can provide advance warning of the kind extreme weather that climate change appears to ...

Precision surveillance by increasingly-powerful oceanography and weather observation satellites is delivering some priceless insights. Read on, for more about Thales Alenia Space’s specialised satellites and what we’re finding out. ...

Satellites are one of the most vital components in better understanding our planet. And it’s no accident that the latest edition of the book Climate Change &amp; Satellites, published by Sud[s] Concepts for Thales Alenia Space, is entitled “Acting Together”. ...