How to explore dark energy and penetrate the mystery of dark matter?

Euclid is an ESA (European Space Agency) astronomy and astrophysics mission designed to help us better understand the nature of dark energy and dark matter. Thales Alenia Space, Joint Venture between Thales (67 %) and Leonardo (33 %) is the prime contractor for the satellite and leads a European industrial consortium with scientific contributions. Euclid will map the general structure of the Universe over 10 billion light years to show its expansion and growth during the last three-quarters of its history. Slated for launch in 2022, Euclid satellite will use a Soyuz rocket from the Guiana Space Center, Europe’s Spaceport in French Guiana, for a six-year mission orbiting around the L2 Lagrange point. 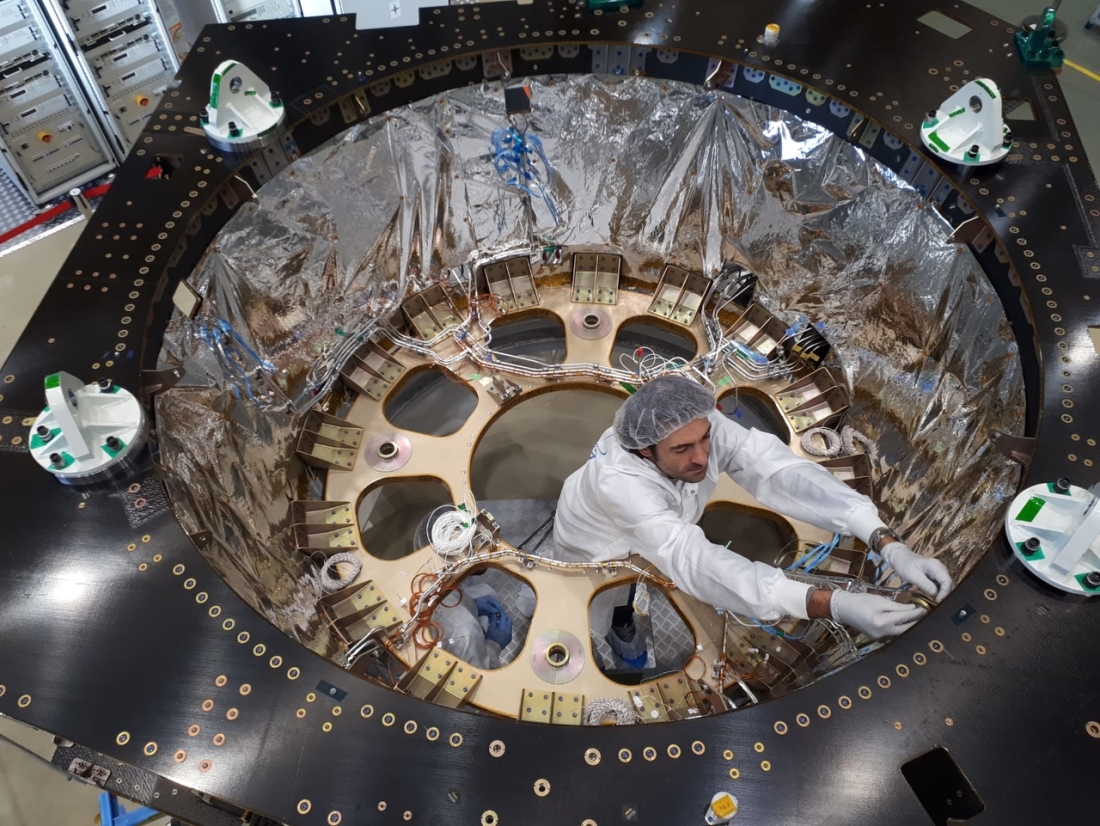 All about Euclid mission

Euclid satellite will study dark energy and dark matter, essential but unknown ingredients in today’s “standard model” of physical cosmology. In this model, only about 4% of the mass-energy of the universe is made of ordinary matter (protons, neutrons etc.). The rest is invisible (dark matter) and the universe seems to be expanding at an accelerated pace under the impetus of the so-far unknown “dark energy”. 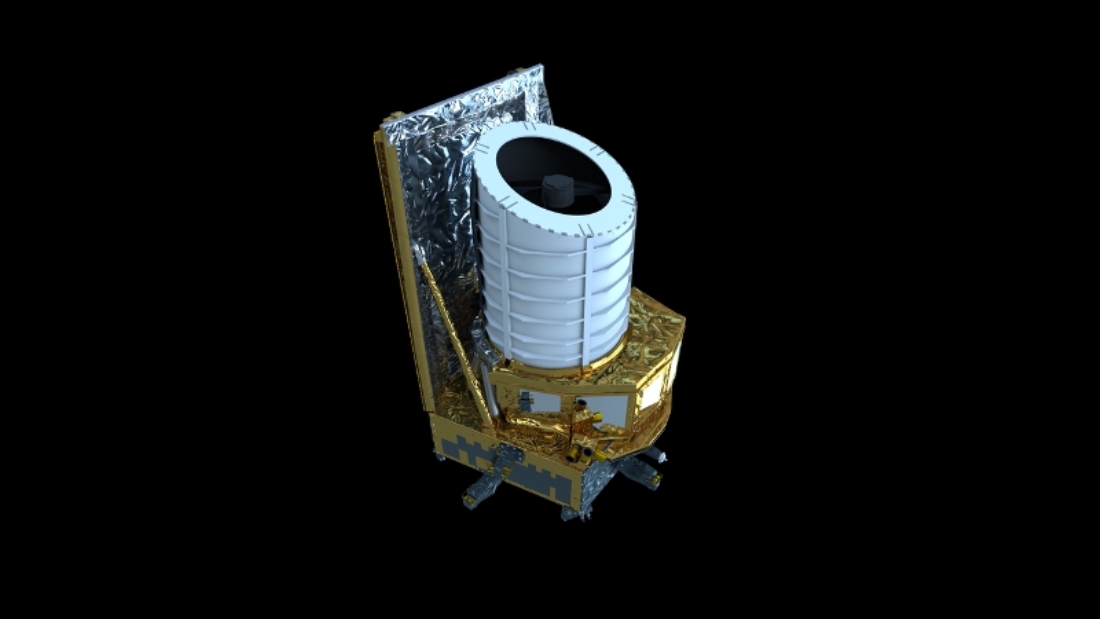 Euclid on the tracks

Mid-2018, ESA approved the detailed design of the satellite and all subsystems at the Critical Design Review (CDR). The structural and thermal model (STM) recently completed its thermal qualification tests at Thales Alenia Space’s plant in Cannes, and will undergo mechanical qualification tests in the coming weeks. At the same time, the flight telescope and service module have already started the integration and testing process at the Airbus plant in Toulouse and the Thales Alenia Space plant in Turin, respectively. The two modules will be mated in 2021, and the complete satellite will undergo acceptance tests prior to launch, scheduled for 2022.

“After the integration and testing of the Euclid service and payload modules , the structural and thermal model of the satellite have now completed its thermal qualification tests in Cannes,” said Paolo Musi, Director of Science Programs at Thales Alenia Space in Italy. “The satellite is in flight like configuration, ready to start mechanical qualification tests. The Euclid program reflects Thales Alenia Space’s expertise, with outstanding contributions by our teams in Italy, Spain, Belgium and France. This extraordinary mission  highlights Europe’s ability to undertake complex, cutting-edge science programs and confirms our role as a key partner in Europe’s leading science and exploration programs.” 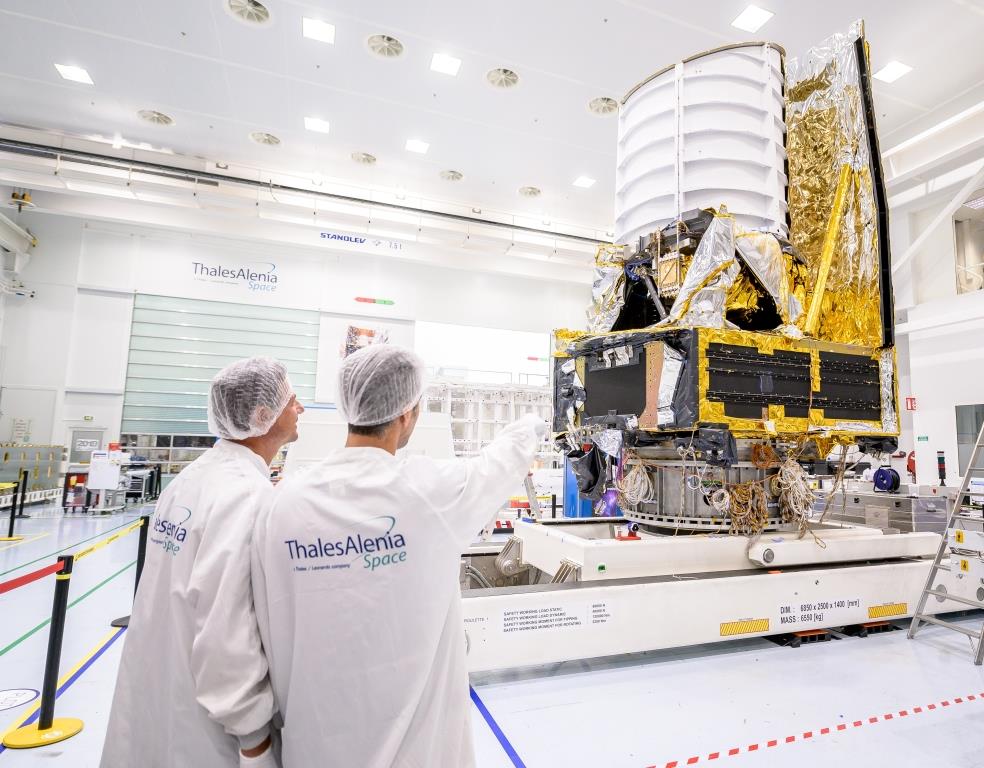 About Thales Alenia Space and the Euclid Consortium (EC)

In July 2013, ESA signed a contract making Thales Alenia Space in Italy the prime contractor for the Euclid satellite. Airbus Defense & Space in Toulouse, France is one of the main subcontractors; it is responsible for the Payload Module, including the telescope and optical bench housing the VIS and NISP instruments from the Euclid Consortium (EC).

The EC,  in charge of the scientific aspect, has conceived, designed and proposed the Euclid mission for ESA’s Cosmic Vision program, as well as new partners for the production phase. Fourteen European countries now contribute to the consortium (Austria, Belgium, Denmark, Finland, France, Germany, Italy, the Netherlands, Norway, Portugal, Romania, Spain, Switzerland and the United Kingdom), along with Canada and the United States, via NASA and a few US laboratories.

Leonardo’s contributions to this mission include the cold-gas thruster system to control the spacecraft’s attitude, the fine guidance sensor and the photovoltaic assemblies (PVA), which power the satellite’s systems.

The main design drivers for Euclid include the quality and stability of the integrated optical system, the speed and completeness of sky surveying, accurate and stable pointing, and the ability to reliably transmit to the ground the huge volumes of scientific data. The design proposed by Thales Alenia Space is based on the experience gained with the Herschel/Planck platform, which demonstrated excellent performance in orbit, integrated with an innovative, agile and precise pointing system and state- of-the-art telecommunications.