New generations of satellites will require more and more power, not only to improve their telecom, observation and scientific services, but also to feed power-hungry electric propulsion systems, a key to reducing weight on tomorrow’s birds. Most of these satellites will call on huge solar panels – about 100 square meters for the largest telecom satellites – to supply this energy.

One of the keys to improving overall performance on these satellites is to use high-voltage systems.

A telecom satellite has two main parts:
Let’s take a closer look at the platform. It houses the electrical power subsystem, or EPS, which distributes electrical power to all electronic units on the satellite. However electrical conversion and distribution leads to significant energy losses, especially because of the electric propulsion system and the payload.

To address this problem, the HV-EPSA (High Voltage Electrical & Power System Architecture) R&D project was launched as part of Horizon 2020, the European research and innovation framework program. It is designed to study the feasibility of using higher voltages on satellite to make them more energy efficient, so they could either be smaller or deliver more services.

The HV-EPSA project is coordinated by Thales Alenia Space, leading a consortium of European partners. 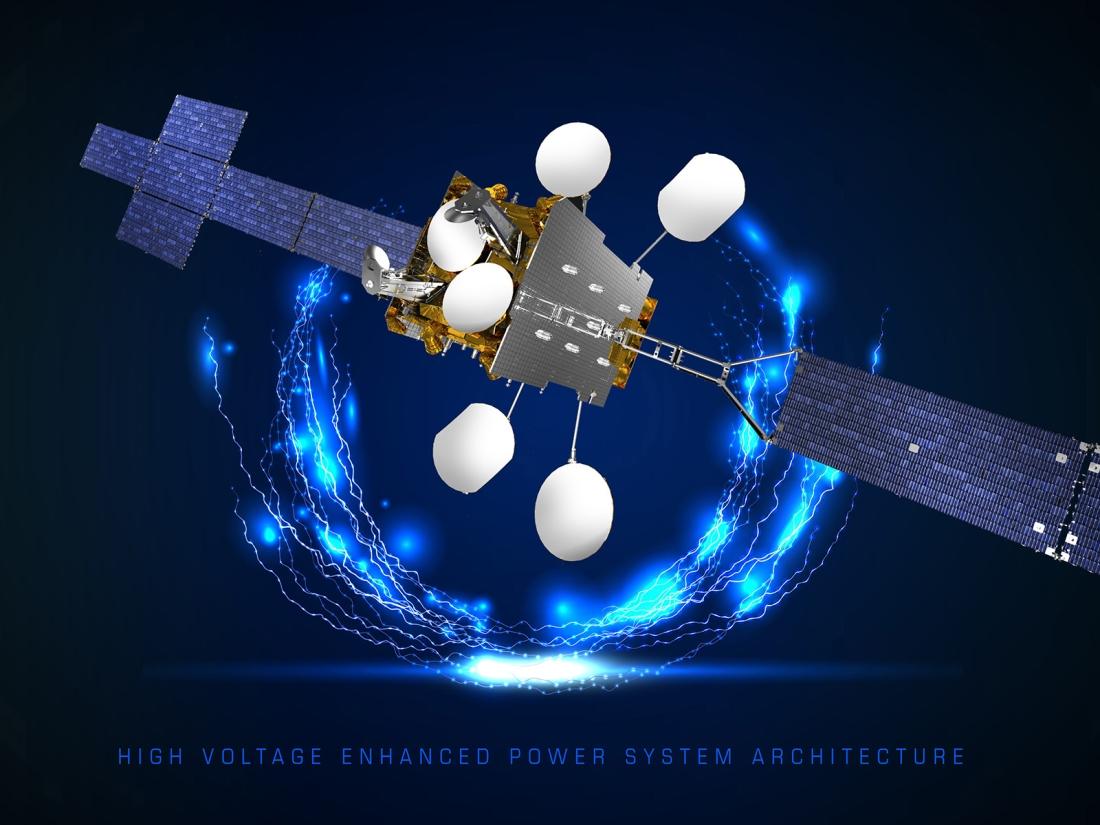 The main objective of the HV-EPSA project is to analyze the complete electrical system, from solar array and batteries to electrically-powered equipment on the platform (including electric propulsion) and the payload (whether for telecommunications or radar observation).

Another major advantage is that using a high-voltage system allows designers to eliminate certain conversion units and their wiring – which may run to several kilometers on a satellite. In turn, that will reduce the satellite’s volume and weight, a real asset given the high price per kilo launched into orbit.

The result is either:

The HV-EPSA study will try to identify ways of avoiding the electrical arcing that may appear on this kind of system, for two main reasons:
To avoid this occurrence, design engineers have to enhance the robustness of certain components, strengthen the insulation on wiring and solar arrays, or even develop new technologies to take full advantage of high-voltage systems, while eliminating the drawbacks.

The HV-EPSA study will analyze the advantages of an operating voltage of 300 to 600 volts for tomorrow’s telecom and Earth observation radar satellites, as well as for spacecraft used to modify a satellite’s orbit or recover space debris. It will also delve into the use of this technology on space exploration missions, such as interplanetary probes. More info on HV-EPSA website: click here

The HV-EPSA project and its partners

As project coordinator, Thales Alenia Space is in charge of the satellite’s electrical system and overall electrical architecture. It coordinates both administrative aspects and also the combined expertise of the partners.

When the project has been completed, the consortium will submit a document to the European Commission including a report on all test results, and the roadmap for technological development. It will also identify the technologies that need to be developed to provide tomorrow’s large telecom satellites with onboard power largely exceeding 20kW.

Thales Alenia Space is a leading participant in the Space section of Europe’s Horizon 2020 (H2020) program, which aims to foster innovation in this sector, along with heightened competitiveness.

The company is heavily involved in a number of H2020 projects, as either coordinator or partner. Following in the footsteps of GoToFly, PAMPA, ONION and now HV-EPSA, we will keep you informed in the coming weeks of other H2020 projects led by Thales Alenia Space.

This project received funding from the European Union’s Horizon 2020 Framework Program for Research and Innovation, under the subsidy agreement No. 687515.