The impressive James Webb Space Telescope, the most powerful telescope of this kind ever made, was successfully launched by Arianespace on December 25, 2021. A joint program between NASA and its counterparts in Europe (ESA) and Canada (CSA), Webb will observe the beginnings of our Universe by reaching back in time to just a few hundred million years after the Big Bang. It will also observe exoplanets – planets outside the Solar System – that are comparable to our own, as well as the formation and evolution of stars and galaxies. The ultimate aim of this successor to the iconic Hubble space telescope is to discover galaxies that reach back to the relative beginnings of the Universe. This state-of-the-art time machine is expected to revolutionize all aspects of modern astronomy. It will unveil the hidden side of the Universe, namely stars enveloped in clouds of dust, molecules in the atmosphere of other worlds, and the light issuing from the first stars and galaxies. 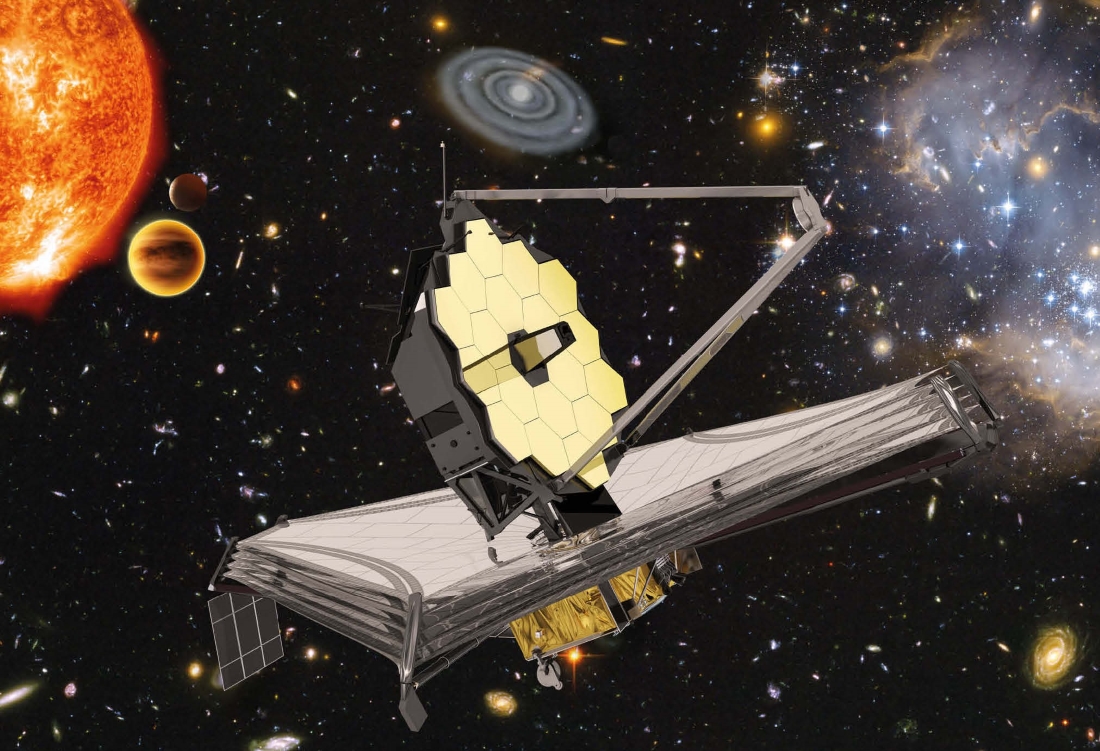 The key to Webb’s outstanding capabilities is its huge primary mirror, made of 18 hexagonal segments and stretching 6.5 meters (21 feet) in diameter. The mirror is 100 times more sensitive that Hubble, with the ability to detect the extremely faint light emanating from distant stars and galaxies. Webb is fitted with four main instruments, imagers and spectrometers.

Both instruments and mirror are protected by a huge heat shield, comprising five ultra-thin layers. It will enable the observatory to resist extreme temperature fluctuations, ranging from +110°C to -235°C.

The satellite is now en route towards its final orbital position at the second Lagrange point (L2), about a million and a half kilometers from Earth. Unlike Hubble, which orbits the Earth, James Webb will orbit around the Sun. It will stay in constant alignment with both Sun and Earth, “behind” the latter. Furthermore, the mirror will always have its “back” to our planet. 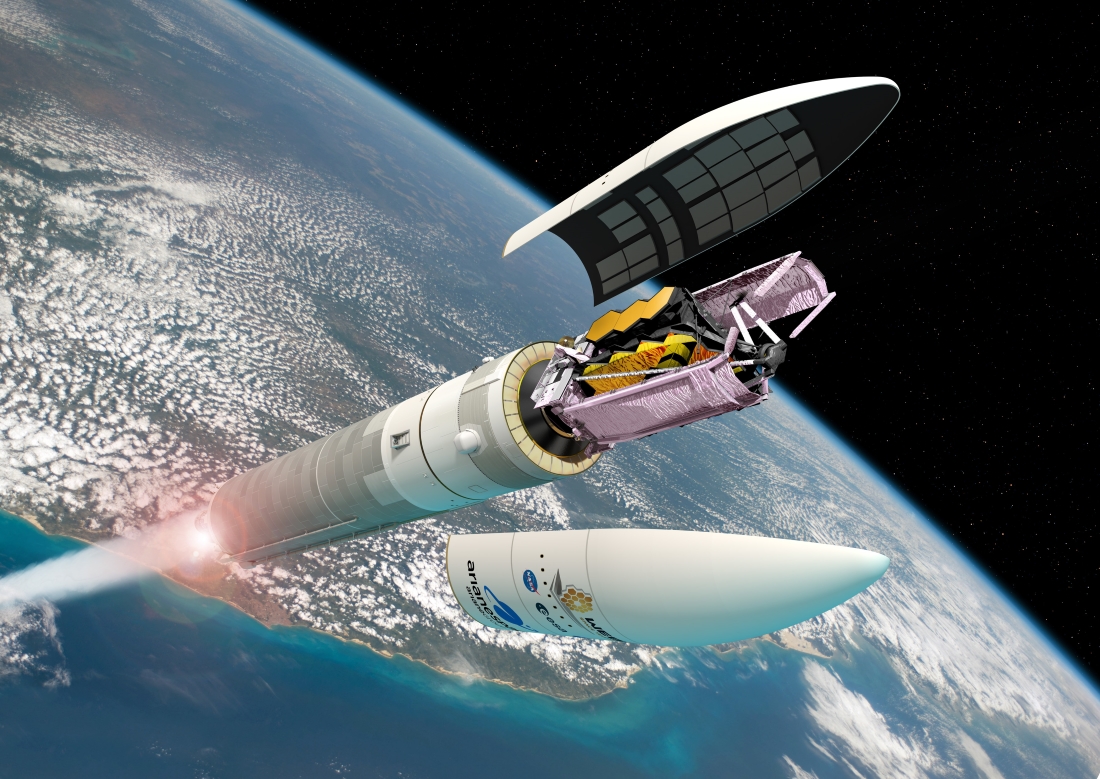 The Webb telescope will gather light in a slightly different part of the spectrum than its older brother. While Hubble observes the Universe in bandwidths from ultraviolet to near infrared, Webb will cover the spectrum from visible to medium infrared. This means the new space telescope will be able to study the infrared light emitted by the first stars and galaxies, as well as other planetary systems.

Webb will observe all phases in cosmic history, looking for the first stars and galaxies to be formed, as well as all forms of life, while also studying the evolution of galaxies and how current stars and planets came to be. 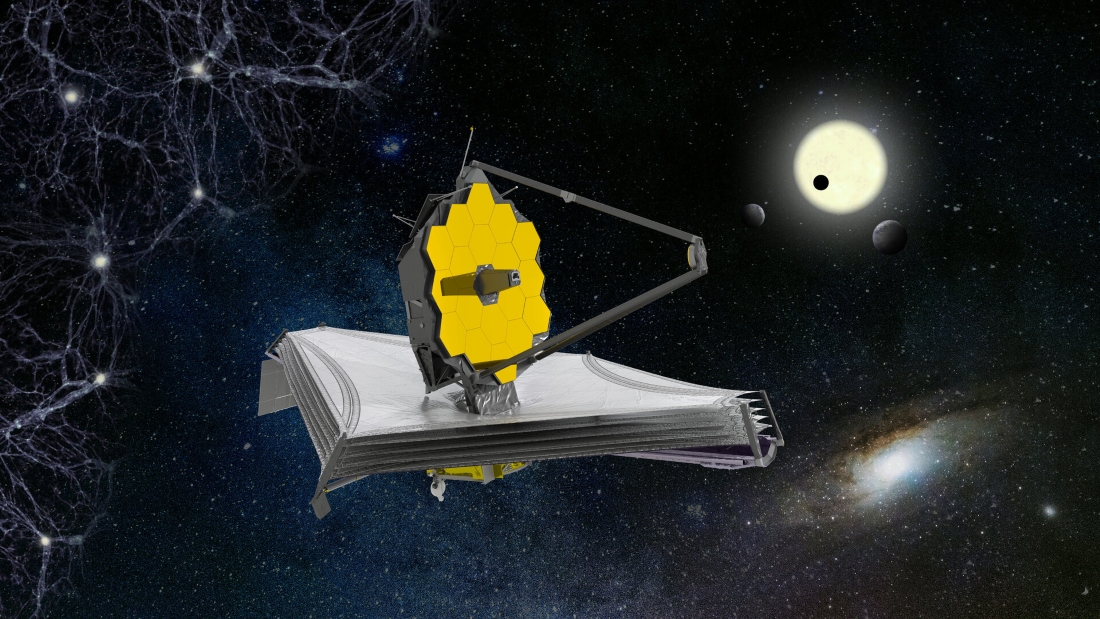 A transponder made in Italy to communicate across deep space

Program prime contractor Northrop Grumman chose Thales Alenia Space in Italy to build the transponder enabling the spacecraft to communicate from deep space. This device drew on the company’s long experience with making long-range transponders for a variety of deep space missions, starting with Cassini/Huygens, then Mars Express, Venus Express, Rosetta, Lisa Pathfinder, Gaia and now the BepiColombo mission on its way to Mercury.

MIRI electronics, made in Belgium

All data and images collected by the James Webb Space Telescope will be downloaded to Earth using a microwave link. To deal with huge distances, millions to billions of kilometers, microwaves are amplified by Thales Microwave & Imaging Sub-systems’ Travelling Wave Tubes (TWT).