Space Q&A: all about Stratobus

Space Q&A. You're in charge of the Stratobus program at Thales Alenia Space. Could you briefly describe this program for us?
JPC. Stratobus is a concept for an autonomous stratospheric platform, midway between a satellite and a drone. The project was selected by the French Ministry of Industry and Digital Technology within the scope of the New Industrial France program, and is being carried out with a group of partners, including Airstar Aerospace and CEA-Liten. Thales Alenia Space is the industrial prime contractor. Stratobus is a 5-ton airship, operating at an altitude of about 20 kilometers (above the airspace dedicated to air traffic and the jet stream), that can host payloads of 250 kg and provide 5 kW of power. It will be 100 meters long, 33 meters maximum diameter, and offer a lifespan in the stratosphere of five years. Stratobus has been endorsed by the Pégase competitiveness cluster, in charge of launching a dirigible industry in France.

Space Q&A. What type of applications will it be used for?
JPC. Stratobus is a multimission platform, intended for both civil and military applications. On observation missions, it will mainly be used for surveillance (secure industrial sites, border monitoring, early detection of piracy at sea) and environmental management (erosion, detection of maritime pollution, weather measurements, maritime traffic management). The oil & gas industry has also shown keen interest, because it would help identify threats under any weather conditions, using a radar payload, along with sensors operating in the visible and infrared bands, with image resolution down to 10 cm. In the maritime sector, Stratobus will be able to detect a suspect boat at 200 km, alert the appropriate authorities, and anticipate the risks of piracy, especially on oil platforms. It would also be possible to deploy four or five Stratobus platforms to monitor 1,000 km of borders, all year long and in any weather.
In the telecom sector, Stratobus could be used to bridge the digital divide in regions where Internet is not yet accessible (desert zones in Africa, for instance), and to bolster the GSM network for major events such as the Olympics.
Stratobus could also be used for navigation, for instance to augment GPS coverage in dense traffic zones. And it could be used during natural disasters, such as the recent earthquake in Nepal, to reestablish Internet and telephone connections for better management of humanitarian efforts. One of the major advantages of Stratobus is that it's transportable, because of its modular design, allowing it to be packed in standard shipping containers. That means it is perfectly capable of being shipped by sea, rail or air. Furthermore, it doesn't need a launch system; an area the size of a football field is enough for it to take off and reach the stratosphere in less than four hours.

Space Q&A. Both the press and social networks have given Stratobus extensive coverage in the last year. How do you explain this enthusiasm?
JPC. The concept is based on innovative technologies. For instance, Stratobus uses a solar concentrator inside the balloon (Thales Alenia Space patent) and a reversible fuel cell that provides a large amount of onboard energy, while minimizing weight and the envelope's surface area, day or night. Another innovation is that Stratobus uses a "ring around the balloon" to allow it to rotate so that it's always facing the Sun during the day, in all seasons. The reversible fuel cell is powered by a solar array, and stores enough energy during the day to power Stratobus at night. It uses two electric motors located on either side of the balloon to maintain its stationary position. 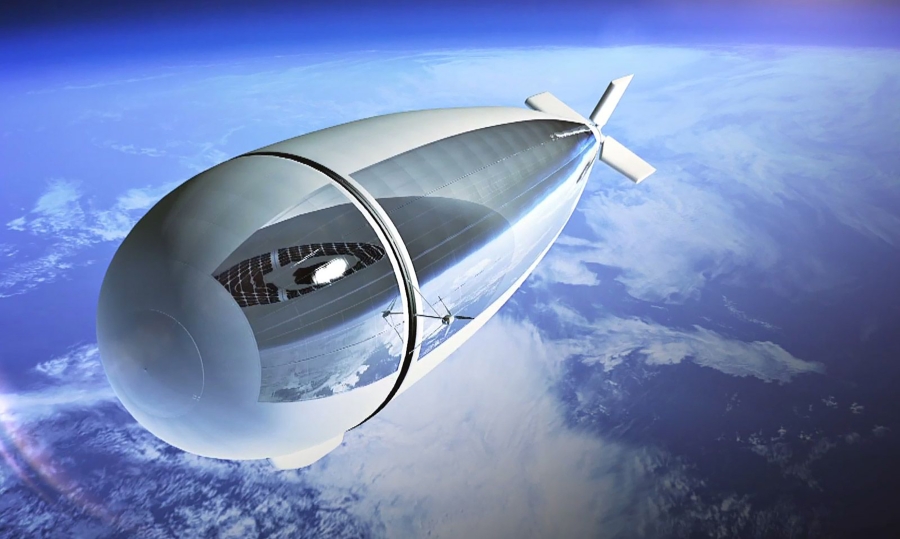 Space Q&A. Public opinion was obviously shaped at the time by the Hindenburg disaster in 1937. But technologies have changed today. What makes the Stratobus concept different from the Hindenburg generation of airships?
JPC. The Hindenburg was a tropospheric airship with a semi-rigid structure that carried passengers. Stratobus has an envelope made of flexible materials, non-rigid on purpose, slightly over-pressurized, to reduce weight. Tremendous technological progress has been made on this envelope, specially developed for Stratobus. In fact, it comprises three envelopes with specific functions: two of them to contain the lifting gas, and the third made of a very strong carbon fiber fabric, the same as used on the sails of certain racing yachts. This technology, confirmed by Air Liquide, guarantees the security of the stratospheric platform, in relation to the risk of inflammable hydrogen. Furthermore, the envelope can be used with helium as well as hydrogen.

Space Q&A. Similar projects are being presented in the United States (Google's Loon balloons), Europe and Japan. From the technical standpoint, how is Stratobus different?
JPC. The solar concentrator and the ring that enables rotation of the envelope are significant differences, maximizing power-to-weight ratio and reducing size. The envelope can be folded up and placed in a 40-foot container, which means it was designed for easy transport. It is both lighter and stronger than the stratospheric airship projects soon to be introduced in the States. The onboard power also enables it to remain permanently stationary, a feature that it is the only one to offer among the HAPS [High Altitude Platform System] projects. Furthermore, it's repositionable, autonomous, and resistant to the wind, thanks to motors powered by photovoltaic cells, via the reversible fuel cell. Japan conducted flight tests of two large, non-powered stratospheric balloons in 2010. But the project was halted because Japan decided to prioritize its space program. In Europe, there is not really any competing solution on the market. I would just mention the Capanina dirigible that ESA flew for a week in the middle of the 2000s, to validate a radio-frequency link with the ground. 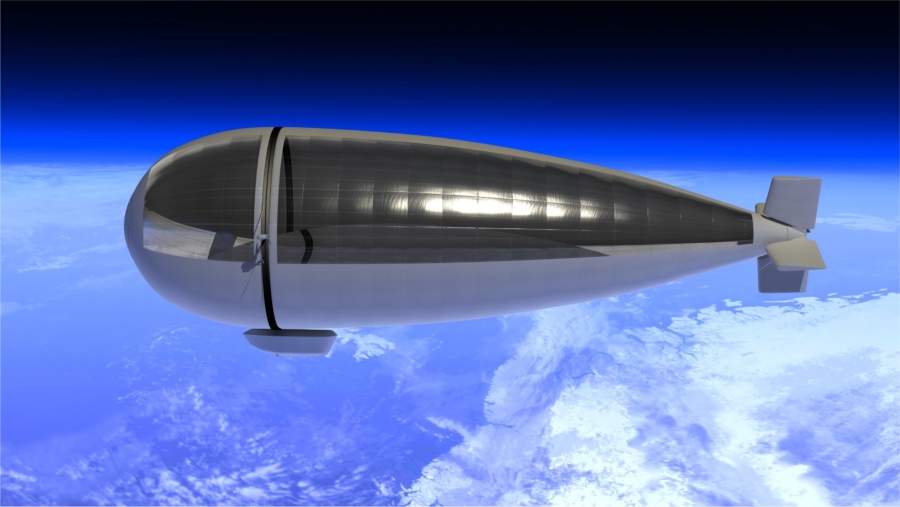 Space Q&A. In which region would Stratobus be most effective?
JPC. Based on over 20 years of stratospheric measurements using CNES sounding balloons, confirmed by data from NASA, we can state that the wind speed in the tropics does not exceed 90 km/h throughout the year. Stratobus's power enables it to counter winds of this force, and remain stationary. So its can handle five-year missions, with annual ground maintenance of a couple days every year. During these maintenance stops, a spare Stratobus would ensure mission continuity for the full five-year span. In France, for example, the Stratobus could be used continuously for eight month non-stop missions. Statistical data from [French space agency] CNES shows that during the four coldest months of the year, the winds in France may reach 110 km/h in the stratosphere. In this specific case, there are two options: either let Stratobus drift for a predefined time period; or bring it down. It can descend in less than four hours. Outside of zones in the tropics, Stratobus could be used for seasonal missions, such as forest fire monitoring during the summer, etc.

Space Q&A. What types of customers/businesses would be interested in this concept?
JPC. Because it's a multi-mission concept, there are a large number of potential customers: telecom operators, governments, defense departments, oil companies, gendarme and police forces, etc.

Space Q&A. What are the competitive advantages in choosing Stratobus?
JPC. Stratobus doesn't need a launcher to reach the stratosphere, and its price is very competitive. Operating on a regional basis, within a radius of 200 km, it can handle a large number of missions, both military and civil. Another main advantage is that it's stationary, autonomous, and above all repositionable, to follow changing customer requirements. Stratobus could well be used for defense as well, to inform and protect soldiers in different theaters of operation. The space sector today is undergoing major changes. For telecoms, in particular, customers now expect flexibility, modularity, competitiveness and production under tight deadlines. Stratobus perfectly reflects this new technological landscape, which is increasingly demanding in terms of innovative solutions. 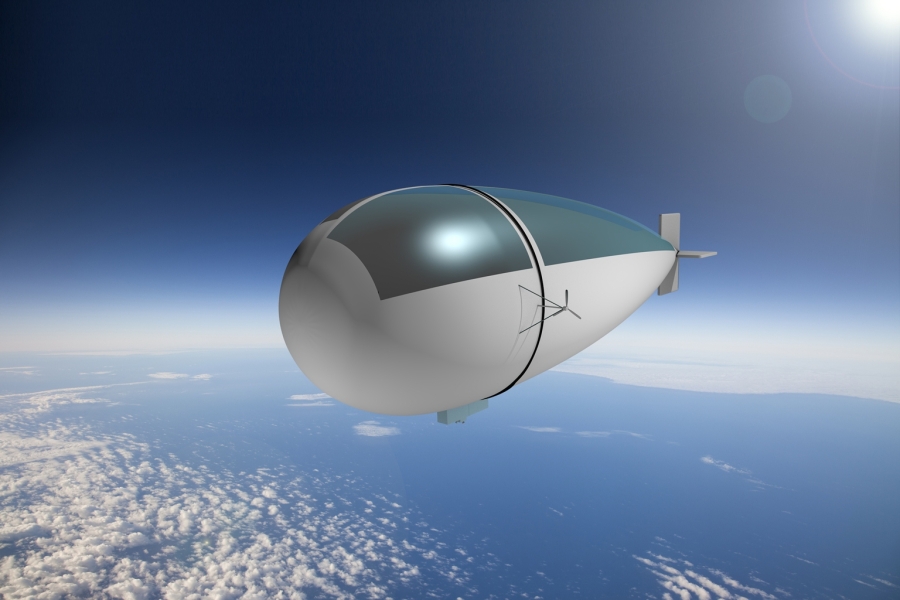 Space Q&A.  What's the current program status?
JPC. To meet our time-to-market goal, we have to complete the development of key technologies, build subsystem prototypes and finalize the design in just two years, from early 2016 to end-2017. From 2018 to 2019, we will build the first Stratobus, Prototype Flight Model (PFM). Then we will need six months to a year for flight testing, to be certified and receive flight authorization so we can start production.

Space Q&A. When would it be available?
JPC. The product will be commercialized towards 2020.

Space Q&A. How does Stratobus complement a conventional satellite solution?
JPC. Stratobus is in no way a substitute for the traditional satellite market. On the contrary, because of its dedicated regional scope, it is a perfect match for satellites' global coverage

Space Q&A. Thank you, Jean-Philippe Chessel, for having answered our questions. Stay tuned for the next Space Q&A!

VIDEO: Stratobus, halFway between a drone and a satellite