Stunning discovery of a distant galaxy similar to the Milky Way

Scientists have just revealed an amazing scientific discovery. Calling on the state-of-the-art technologies offered by the ALMA ground-based radiotelescope, astronomers have unveiled an extremely distant galaxy that could practically be mistaken for our own Milky Way. This galaxy is so far away that its light took over 12 billion years to reach us! Scientists explain that what we now see is the galaxy as it was when the Universe was “only” 1.4 billion years old. 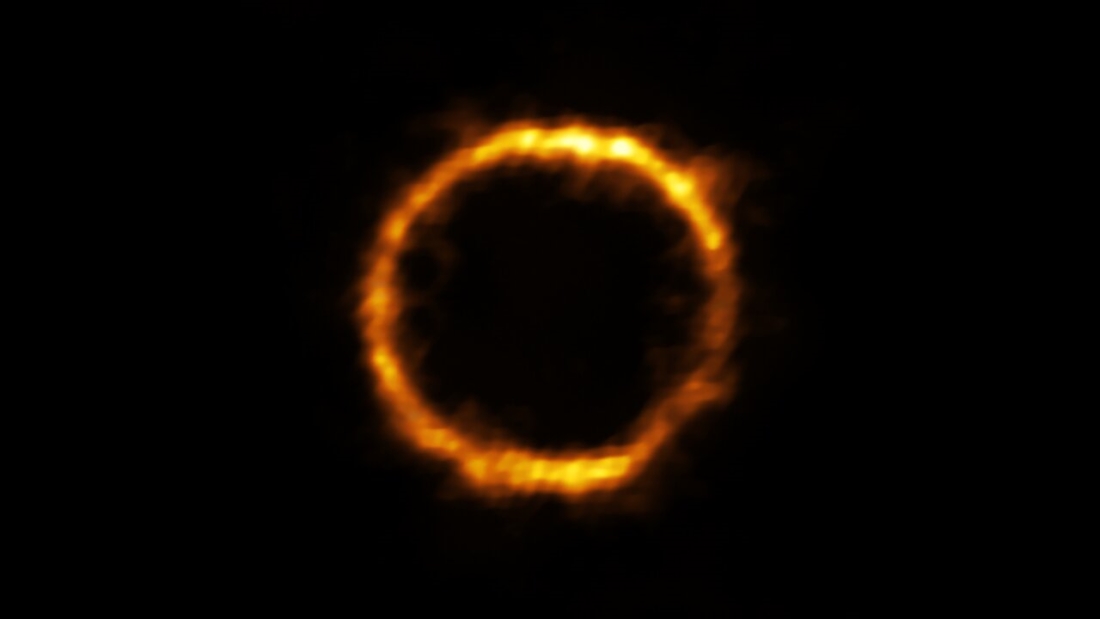 Designated SPT0418-47, this recently discovered galaxy has at least two major similarities to our own: a rotating disk structure and a bulge, a central, tightly packed group of stars around the core. It’s the most distant of the galaxies that resemble our Milky Way.

Since we’re talking about galaxies far, far away, it’s virtually impossible to carry out precise observations, even with today’s most powerful telescopes. Scientists overcame this problem by using a nearby galaxy as a magnifying glass – a technique better known as gravitational lensing – and allowing ALMA to go far back in time, providing details never before seen. The gravitational pull from the neighboring galaxy distorts and bends the light from the distant galaxy, giving it a misshapen and magnified appearance. This makes the distant galaxy look like a nearly perfect ring of light around the nearby galaxy. The research team used data from ALMA to reconstruct the actual shape, based on a new computer modeling technique. 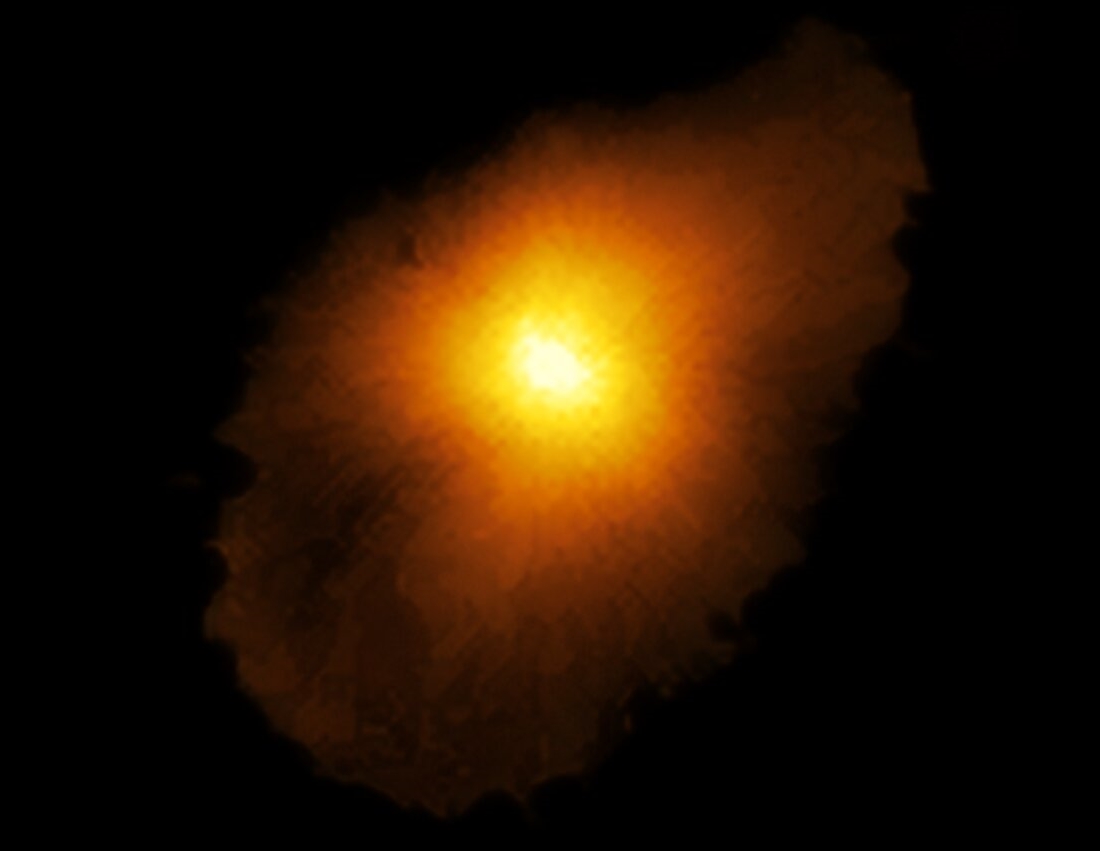 While the new SPT0418-47 galaxy has a disk and other characteristics similar to those of known spiral galaxies, the research team also expects it to evolve into a very different galaxy from the Milky Way and join the category of elliptical galaxies.

Being able to study distant galaxies is a key to understanding how galaxies are formed and evolve. This latest unexpected discovery suggests that the early Universe was not as chaotic as we thought, and also raises a number of questions about how a well-ordered galaxy could have been formed so soon after the Big Bang. This treasure chest of galactic data will drive cosmic research for many years to come. 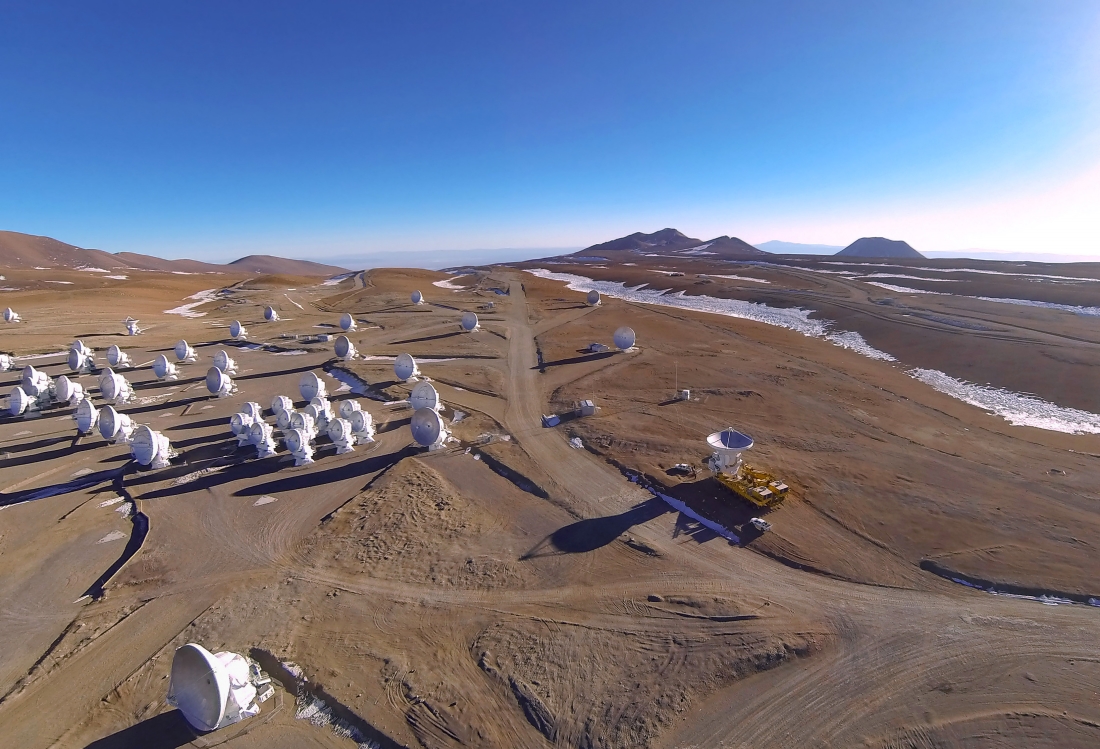 Located on the Chajnantor plateau in the Atacama desert of northern Chile, the Atacama Large Millimeter/submillimeter Array (ALMA) is also an array of superlatives. One of the largest radiotelescope ever built, ALMA is no ordinary ground-based astronomy system. The array consists of 66 giant dish antennas, 54 twelve meters in diameter and 12 seven meters in diameter, observing at millimeter and submillimeter wavelengths. This colossal facility is an international partnership between Europe, the United States and Japan.

A new view of space

ALMA’s main objective is to observe the “cool” Universe, the molecular gas and dust between the stars, providing astronomers and scientists with new insights into how stars and planets form and detecting nascent galaxies as they may have existed more than 10 billion years ago. As you’ve undoubtedly understood, the ALMA observatory will provide fresh clues to existential questions about our “cosmic” origins.

As lead company in the European consortium AEM, Thales Alenia Space was prime contractor for the 25 antennas supplied by Europe for this project. It took 10 years to build the subassemblies in Europe, transport them to Chile, install them at the site in the Atacama desert, 5,000 meters above sea level, then calibrate them and demonstrate compliance with technical specifications.

Achieving the requisite performance for these huge antennas — including a reflector surface accurate within 11 microns RMS, or one-fifth the thickness of a human hair, combined with extreme pointing accuracy on distant objects — called for an unprecedented feat of engineering. All of these antennas need to point at exactly the same location in space at exactly the same time, despite operating in the extreme conditions of the high-altitude desert environment. Program partners rose to these challenges, including the effect of Earth’s gravity, wind gusts and temperature fluctuations in the desert of almost 40°C in just a few hours. Even the slightest design weakness could compromise pointing accuracy. In operation for several years now, the ALMA antennas have proven flawless!

Sitting on top of the world! 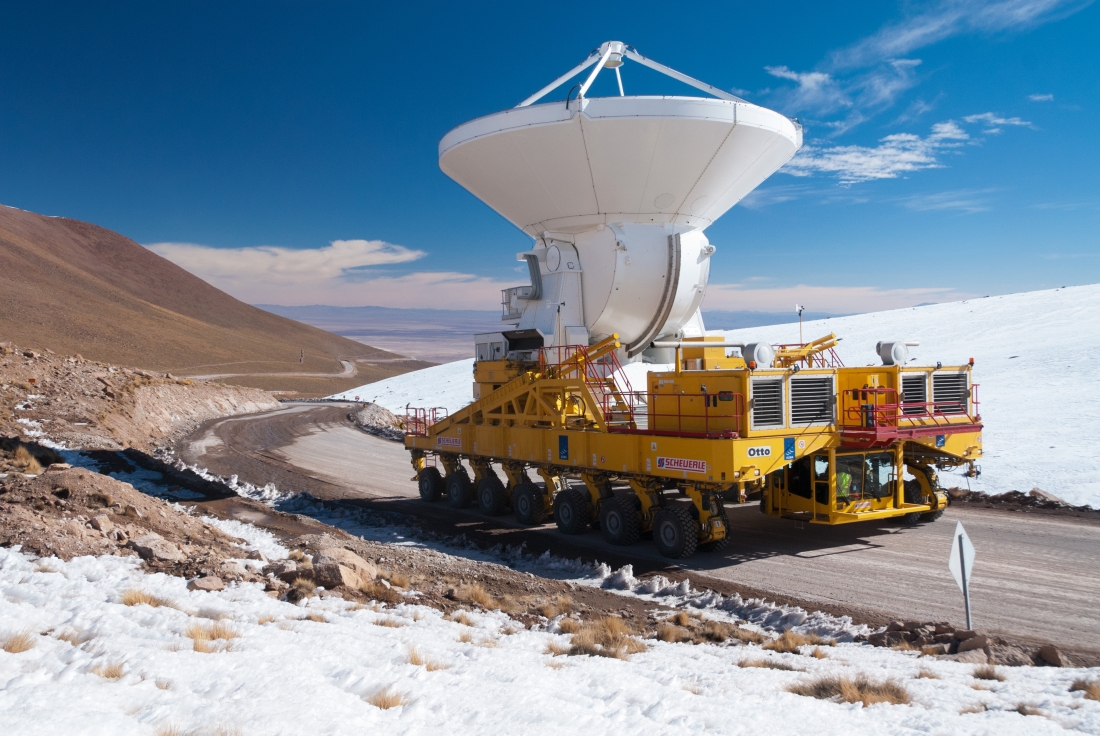 To transport the huge antennas from the ALMA base camp at 3,000 meters above sea level to the Chajnantor plateau at more than 5,000 meters, ALMA and the European Southern Observatory (ESO) built a 47-kilometer access road and ordered two heavy haulers, each designed to carry one antenna at a time. These custom-built trucks were 20 meters long and 10 meters wide, weighed 130 metric tons and were powered by twin diesel engines, each developing over 1,000 horsepower. A trip up the mountainside took three to four hours. How can an observatory on such a colossal scale, with its giant 100-ton antenna installation, achieve such extraordinary levels of pointing accuracy? That’s ALMA’s secret!

The antennas are working perfectly, their performance recognized by users and ESO alike. Hardly a week goes by without the ALMA observatory announcing a new scientific discovery, some complete with spectacular images – just a click away on the ESO website!