Cannes, July 1st, 2021 – Following the recent selection by the European Space Agency (ESA)’s Science Programme Committee of EnVision as the fifth Medium-class mission in the Agency’s Cosmic Vision plan, Thales Alenia Space, the joint company between Thales (67%) and Leonardo (33%), will pursue the B1 study phase for the Venus orbiter. This orbiter is dedicated to providing a holistic view of the planet from its inner core to upper atmosphere to determine how and why Venus and Earth evolved so differently. EnVision will complement two other Venus missions announced by NASA as part of its Discovery program to explore the Solar System: the descent probe DAVINCI+ and the orbiter VERITAS, slated for launch towards the end of the decade.

Venus is the planet closest to Earth and its characteristics are similar in terms of size, gravity field and overall composition and is located at the edge of the Solar System’s habitable zone. When they first formed, these two planets were undoubtedly alike. But while the Earth offers a very temperate climate, the surface temperature on Venus now exceeds 460°C and its atmosphere, bereft of water, is mainly composed of carbon dioxide (96%), which provides an atmospheric pressure on the surface of 92 bar, that is almost hundred times denser than on Earth ! High abundance of corrosive sulfur-bearing gases indicates high level of current volcanic activity. The absence of plate tectonics and internal magnetic field also makes Venus drastically different from our home planet. 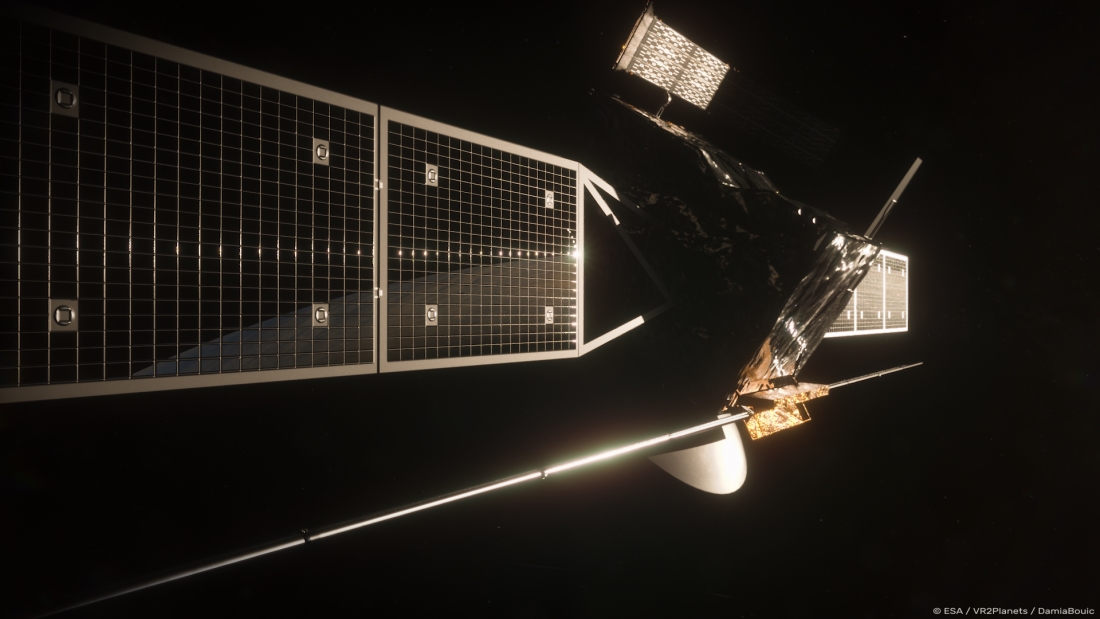 One of the most intriguing questions in planetary science is why our immediate neighbor evolved so differently and underwent such a spectacular climate change and whether the planet is still active today. ESA’s EnVision mission aims to provide a comprehensive view of the planet, from its inner core to its upper atmosphere, to help explain why Venus and the Earth took such divergent paths in their evolution.

Thales Alenia Space, one of the two prime contractors selected for this study phase will work with OHB as main partner to design the spacecraft that will orbit Venus. The mission’s cost, development and technical feasibility being recently completed, this new phase which will kick off in July 2021 for a period of 30 months, will consolidate the design of the mission and spacecraft and prepare its implementation.

The orbiter will carry five instruments provided by the ESA Member States and NASA to understand how  the surface and atmosphere of Venus evolved over billions of years and whether the planet is still active today. The European payload  includes a sounder to investigate subsurface structure and three spectrometers to study the atmosphere and analyze the surface. A synthetic aperture radar from NASA will acquire images of the surface and map its properties. The radio-science experiment will determine the planet’s gravity field more accurately. These instruments will be working together to more completely characterize the planet, thus offering an overall view of Venus and its associated processes.

“We’re very proud to be on board this very innovative and exciting new ESA mission, which will help us pierce the mysteries of Venus’s geological and climatic evolution,” said Bertrand Denis, VP Domain Observation and Science France at Thales Alenia Space. “Furthermore, this mission clearly shows the key role played by Europe and Thales Alenia Space in carrying out scientific investigations of our Solar System.”

Venus, Mars, Mercury, Saturn, the Sun, comets, exoplanets, the dark universe… and soon, a return to the Moon! Thales Alenia Space has always been a key partner in international space exploration missions, a role that is clearly reflected in its tagline, “Space for life”. In addition to its role in the exploration of the Solar System, the company also supplied fully half of the International Space Station’s pressurized volume, as well as pressurized modules for resupply vessels. In 2020, ESA chose Thales Alenia Space to supply the two main European modules for the Lunar space station, a key part of NASA’s Artemis program, designed to return astronauts to the Moon by 2024.

Drawing on over 40 years of experience and a unique combination of skills, expertise and cultures, Thales Alenia Space delivers cost-effective solutions for telecommunications, navigation, Earth observation, environmental management, exploration, science and orbital infrastructures. Governments and private industry alike count on Thales Alenia Space to design satellite-based systems that provide anytime, anywhere connections and positioning, monitor our planet, enhance management of its resources, and explore our Solar System and beyond. Thales Alenia Space sees space as a new horizon, helping to build a better, more sustainable life on Earth. A joint venture between Thales (67%) and Leonardo (33%), Thales Alenia Space also teams up with Telespazio to form the parent companies’ Space Alliance, which offers a complete range of services. Thales Alenia Space posted consolidated revenues of approximately 1.850 billion euros in 2020 and has around 7,700 employees in 18  sites in 11 countries across Europe and a plant in the USA. www.thalesaleniaspace.com