•    HERA aims to find out if it is possible to deflect a hazardous asteroid on a collision course with Earth, as strategy ready for use to prevent an actual threat
•    HERA is part of AIDA program, the first-ever full-scale demonstration of asteroid deflection for planetary defence
•  Thales Alenia Space will provide the communications system and other key equipment to HERA spacecraft, which will send essential data from the Didymos binary asteroid (a prototype of the thousands of asteroids that pose a threat to our planet)

Madrid, September 15, 2020 - Thales Alenia Space, a joint venture between Thales (67%) and Leonardo (33%),  has been selected by OHB, prime contractor, and the European Space Agency (ESA), to provide the Communications system as well as the Power Conditioning and Distribution Unit (PCDU) for the HERA mission.

Named after the Greek goddess of marriage, HERA, European contribution to AIDA international cooperation (Asteroid Impact & Deflection Assessment, the first planetary defence mission of humanity), aims to find out if we are capable of deflecting an asteroid and prevent it from hitting Earth. AIDA consists of two missions,  NASA’s Double Asteroid Redirection Test (DART), a kinetic impactor designed to deviate the orbit of the smaller of the two Didymos asteroids, and ESA's HERA inspector spacecraft, that will rendez-vous the Didymos target asteroid about 4 years after the DART impact. HERA, scheduled for launch in 2024, will travel for the first time in history to explore a binary asteroid system. 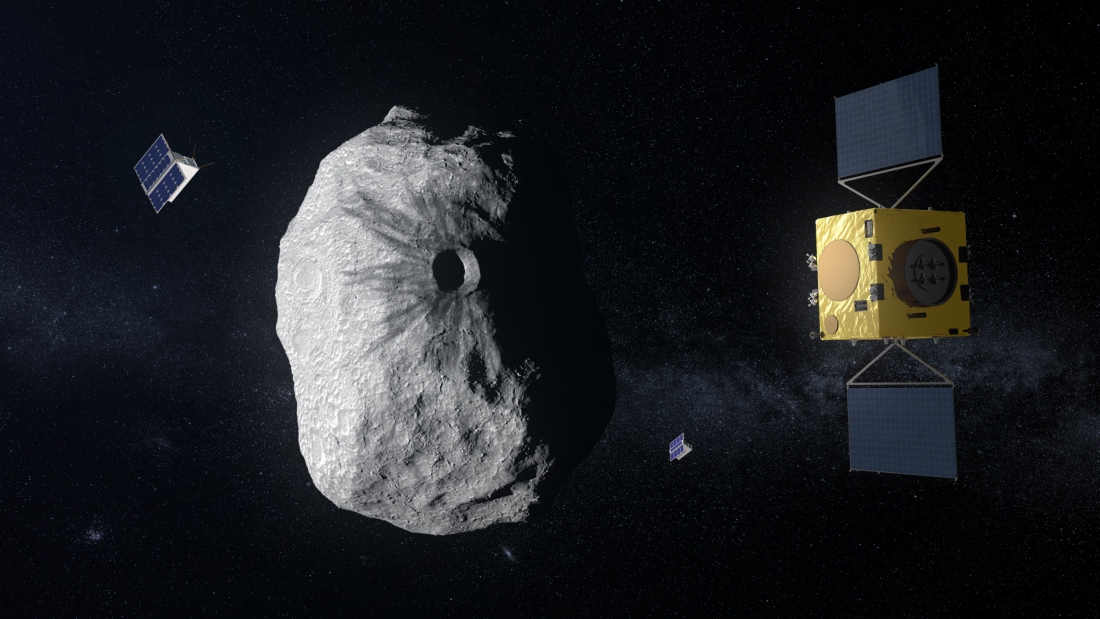 Eduardo Bellido, CEO of Thales Alenia Space in Spain, said: “It is exciting to be part of this historic experiment for humanity to protect the Earth against asteroid collisions. Our technology will deliver essential data to scientists to be able to establish a planetary defence strategy based on asteroids deflection, to prevent the threat of an impact on Earth. Landing on Titan, mapping the Universe with Herschel and Planck, hunting a comet with Rosetta and now preventing Earth against Asteroid, all so amazing and unimaginable challenges our company is so proud to face”.

HERA will send key information to Earth on the physical properties of Dimorphos, (including mass, size, shape, volume, density, porosity, size distribution of surface material) to determine the momentum transfer efficiency of the impact and to allow scaling it to different asteroids; details of the crater formed by the impact to improve our understanding of the cratering process; and observations on the subtle dynamic effects that are difficult to detect from ground-based observations.

Asteroids are bodies originated in the young stars nebulae that never grew to planets, formed of rock and metal. Among them, those that have an orbit that brings them close to Earth, known as near-Earth asteroids, pose a risk of hitting the Earth. There are plenty of such bodies in our Solar system, from tiny little ones measuring a few meters (there’s 40-50 millions of them) up to larger ones, measuring more than 1 km but much more scarce (there’s less than 1000 of them).

Neither the smaller near-Earth asteroids nor the larger ones pose a real threat to humanity. Small asteroids actually hit the Earth quite frequently (every two weeks) with no consequences. The larger ones, although potentially dangerous, are well-known and tracked, and it takes millions of years to have one of them hitting the Earth. Actually, a 10km asteroid impact is the most accepted theory of the Cretaceous extinction around 66 million years ago, ending with three-quarters of the plant and animal species, among others the dinosaurs. Another famous asteroid impact was Tunguska in Siberia in 1908, presumably belonging to the 30 to 100 meter class, which hit the Earth every 10 years.

It is the mid-sized class asteroids of more than 100 meters the ones we need to worry about, such as the asteroid HERA will explore. There are about 30,000 near-Earth asteroids of the 100 to 300 meter size class, 82% of them still to be spotted, hitting the Earth every 10,000 years. The impact energy of such an asteroid is equivalent to around 50 megatons of TNT, the power of a “Tsar Bomba”. The effect of such an impact would be devastating if it reached a populated area, capable to destroy an entire city or to create a tsunami if it impacted a sea.

The Didymos binary asteroid system is prototypical of the thousands of asteroids that pose a hazardous risk of impact to our planet. Around the main body, 780 meter in diameter (the size of a mountain), orbits a 160 meter moonlet, Dimorphos, similar in size to the great pyramid of Giza. HERA will target this moonlet, which will become the smallest asteroid ever visited by a probe.

The DART spacecraft will be launched in July 2021 and is expected to hit the surface of Dimorphos on September 2022 at a speed of almost 7 kilometers per second, which is expected to modify its orbit around Didymos and create a substantial crater. Dimorphos will thus become the first object in the Solar System whose orbit and physical characteristics have been measurably modified by human effort.

The HERA spacecraft will reach the binary asteroid by the end of 2026, and during 6 months it will perform a detailed study mapping the impact crater caused by DART and measuring the mass and other physical properties of the asteroid to determine the effect of the impact on its orbit. Thus, the data provided by HERA will allow, for the first time, to validate and refine the numerical impact models at the asteroid scale, thus making this deflection technique ready for use for planetary defense if it were ever necessary to safeguard the Earth.