Thales Alenia Space in the UK will lead the study to discover previously unseen pristine comets.

December 14, 2020 – In the UK, Thales Alenia Space, the joint venture between Thales (67%) and Leonardo (33%), has been selected by the European Space Agency (ESA) to lead one of two parallel studies for the Comet Interceptor mission.

The Comet Interceptor mission consists of one spacecraft and two small probes. It was selected by ESA in June 2019 to combine breakthrough technology in new comet discoveries to reveal information about pristine comets entering the inner Solar System or an interstellar object passing through the Solar System. The scientific mission was originally proposed by an international team led by UK academics from University College London and the University of Edinburgh, among others. 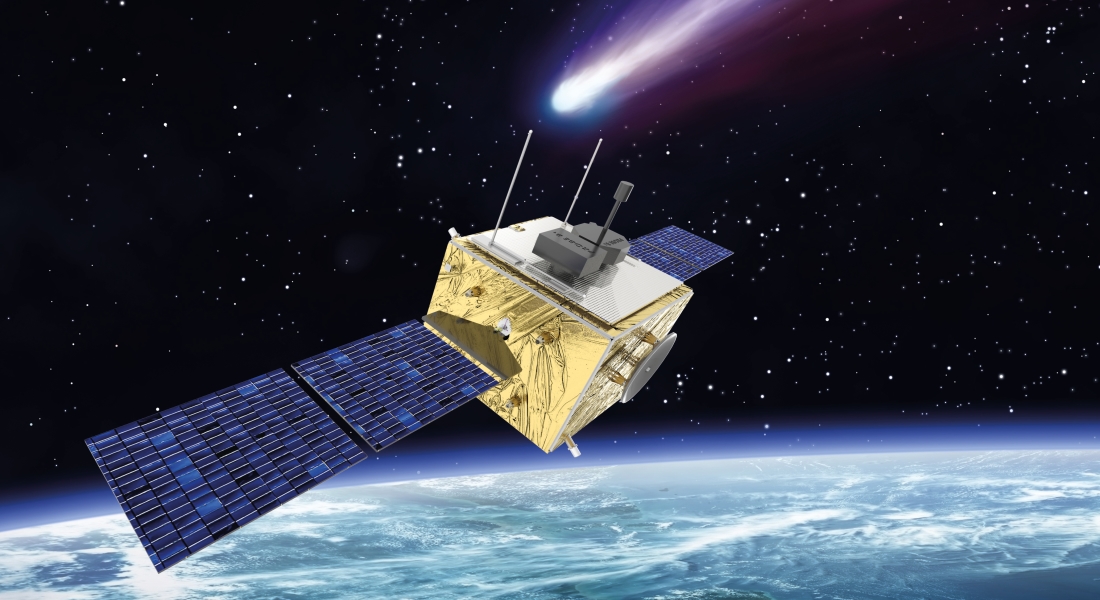 The three elements of the mission are a mothercraft, provided and operated by ESA and two small probes, (B1) provided by the Japanese Space Agency JAXA and (B2) by ESA, carried as payloads aboard the mothercraft.

The mission will launch in 2028 and wait in orbit for a suitable target; the composite spacecraft will travel together before the three modules separate a few days prior to intercepting the comet. Each module will be equipped with science instruments, providing different perspectives of the comet’s nucleus and its gas, dust, and plasma environment. Such ‘multi-point’ measurements will greatly improve the 3D information needed to understand the dynamic nature of a pristine comet while it is interacting with the constantly changing solar wind environment.

The mission’s instruments will be provided by consortia of research institutes and will draw on heritage from previous ESA missions such as Giotto and the currently flying ExoMars Trace Gas Orbiter with its dust, fields and plasma instruments, as well as a mass spectrometer, like those that flew on Rosetta.

Science Minister Amanda Solloway said “The UK’s space industry is thriving and this out-of-this-world mission is testament to our world-leading expertise. I am very proud that scientists and engineers in Bristol and Harwell will be designing the Comet Interceptor spacecraft – their incredible work will not only further our understanding of the evolution of comets but help unlock the mysteries of the universe.”

Andrew Stanniland, CEO of Thales Alenia Space in the UK commented “I am delighted ESA has once again placed its trust in our scientists and engineers at Thales Alenia Space in the UK who have excellent heritage from previous scientific missions such as Giotto and Rosetta. We all look forward to supporting this exciting and unprecedented scientific mission to uncover more information about the origins of our Universe.”

Comet Interceptor.
Comet Interceptor has been selected by ESA’s Science Programme as a Fast track mission in its Cosmic Vision Programme for a nominal launch in 2028, on a shared Ariane 6.2 flight, with the ESA mission ARIEL. The ‘Fast’ refers to the implementation time, with a total development duration from selection to launch readiness of about eight years. F-class missions, which have a launch mass of less than 1000 kg, will share the ride into space with a medium-class mission, taking advantage of additional space in the launcher and the boost to the Sun-Earth Lagrange point L2, which is 1.5 million kilometers ‘behind’ Earth as viewed from the Sun.