Selected by the European Space Agency, Thales Alenia Space leads study to develop a demonstration payload to extract oxygen from Moon rock to sustain human activities on the Lunar surface

Bristol, February 23, 2022 – Thales Alenia Space, a joint venture between Thales (67%) and Leonardo (33%), has signed a study contract with the European Space Agency worth one million euros for a payload concept to extract oxygen from Moon rock. 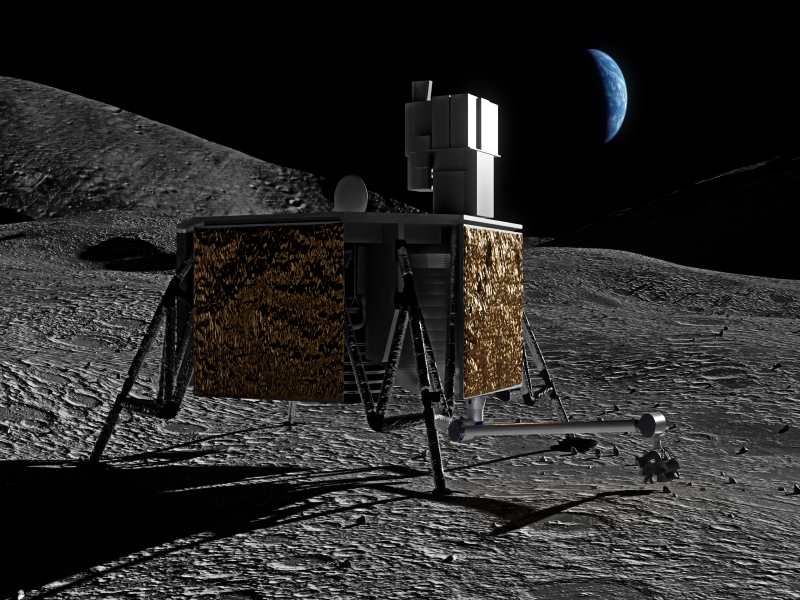 For a sustainable habitation on the Moon, humans will need to utilise resources that they find on the Moon rather than transport these resources from Earth; one of these resources is oxygen. Thales Alenia Space teams in the UK have worked with AVS, Metalysis, Open University and Redwire Space Europe to specify a demonstration payload for a European Space Agency Lunar Mission that uses molten salt and electrolysis to extract oxygen from Moon rock ‘regolith’. The winning proposal from an ESA competition between multiple industrial consortia, this payload concept will demonstrate that In Situ Resource Utilisation (ISRU) can be performed on the Moon efficiently and to produce oxygen in the quantities required by future Moon colonies.
Andrew Stanniland, CEO of Thales Alenia Space in the UK commented

This contract award is incredibly exciting. The adaption of processes and tools to the space environment, many of which we take for granted on Earth, will be critical in many areas of our future. I am proud that our dedicated teams will be leading this study together with our valued partners AVS, Metalysis, Open University and Redwire Space Europe to solve the complex challenge of creating oxygen to sustain life on the lunar surface.

ESA is looking forward to working with Thales Alenia Space in the UK and their partners to develop an oxygen extraction demonstrator further as part of the space resources initiative. Finding solutions to the challenges posed to make sustainable lunar exploration a reality.

Thales Alenia Space at the heart of the Lunar industrial challenge.
Thales Alenia Space, already responsible for the thermomechanical systems on the European service module for Orion, is heavily involved in the European Space Agency's contribution to the  Lunar Gateway with the development of the I-HAB (International - Habitat) and ESPRIT (European System Providing Refuelling, Infrastructure and Telecommunications) modules. For Northrop Grumman, Thales Alenia Space is also developing the pressurized module for HALO (Habitation And Logistics Outpost), one of the first two elements of the Lunar Gateway, to be launched by the end of 2023.

The Lunar Space Station, Gateway
The Lunar Gateway is one of the pillars of NASA’s Artemis program, supporting a sustainable presence on the Moon and exploration beyond. It’s an international project, led by the two main contributors NASA (United States) and ESA (Europe). Weighing about 40 metric tons, the Gateway will be automatically assembled piece by piece and placed in a “near rectilinear halo orbit” (NRHO) around the Moon. It mainly comprises habitation modules for the crew, power and propulsion systems, logistics modules, communications systems, a robotic arm and docking ports. It is not intended for permanent occupancy, but will be able to host 4-person crews for periods of one to three months. Gaining new experience around the Moon will prepare NASA to send the first humans to Mars as from 2030 – and the Gateway will play a key role in this process.

Studies for a sustained human presence on the Moon
Along with current projects Thales Alenia Space has also been chosen to design advanced solutions for a sustained human presence on the Moon. One of these visionary studies is EL3, or the European Large Logistic Lander (EL3). A free-standing part of international lunar exploration activities, it’s a versatile system designed to support a variety of missions. It is aimed to provide cargo and logistics services for NASA-led lunar missions via Artemis and support a European mission to study the Lunar South Pole with a robotic laboratory derived from the designed sample fetch rover.

ABOUT THALES ALENIA SPACE
Drawing on over 40 years of experience and a unique combination of skills, expertise and cultures, Thales Alenia Space delivers cost-effective solutions for telecommunications, navigation, Earth observation, environmental management, exploration, science and orbital infrastructures. Governments and private industry alike count on Thales Alenia Space to design satellite-based systems that provide anytime, anywhere connections and positioning, monitor our planet, enhance management of its resources, and explore our Solar System and beyond. Thales Alenia Space sees space as a new horizon, helping to build a better, more sustainable life on Earth. A joint venture between Thales (67%) and Leonardo (33%), Thales Alenia Space also teams up with Telespazio to form the parent companies’ Space Alliance, which offers a complete range of services. Thales Alenia Space has around 7,700 employees in 10 countries with 17 sites in Europe and a plant in the US.