On the 75th Anniversary of the Captain Cook Graving Dock

Garden Island is a familiar landmark on Sydney Harbour. It is well known as the East Coast home of the Royal Australian Navy, but it is also the site of one of Australia’s greatest engineering triumphs, the Captain Cook Graving Dock.

How the Dock came to be 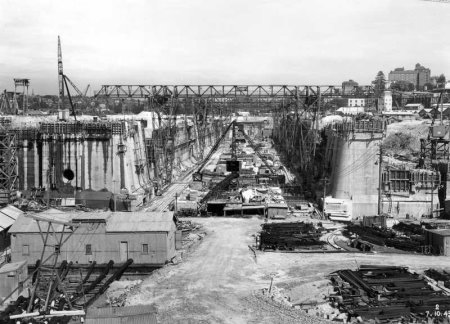 The outbreak of World War ll in 1939 led to a Government announcement on 1st May 1940, that the new dock was to be built and work commenced in August the same year. Previously, the closest naval graving dock capable of taking capital ships was in Singapore, which required ships in the western Pacific region to undertake a significant transit; up to 4,000-nautical-miles taking around two weeks.

Work continued from August 1940 to when it officially opened on March 24, 1945 with the Governor General’s wife naming it as the Captain Cook Graving Dock. The first ship to use the dock was HMS Illustrious, although this occurred a few weeks prior to the official opening as it was in urgent need of repairs.

A major part of the Dock’s history is the attack on Sydney in 1942 and the lives that were lost as a result. You can read more about this at the Naval Historical Society of Australia’s page, here.

Throughout the years, for those who operate, maintain and accept the stewardship role in keeping this sovereign Defence asset operational, a significant sense of pride and accomplishment has been built.

Together with the RAN, other Defence stakeholders and industry partners, management of the Captain Cook Graving Dock has been a continuous and collaborative exercise in supporting Australia’s national interest.

With thanks to the Naval Historical Society of Australia for the provision of information contributing to this article.