The world is forging ahead with digital ID wallets while Brits are still fumbling with their cards and queueing up. Can the UK afford to be left behind when the world goes fully digital?

This article originally featured in The Times as part of a report by Raconteur.

One company is already busy filling Britain’s wallets – sadly not with cash, but with everything else a citizen might need to run their life. “Inside your wallet we are trusted to make your passport, driving licence and quite probably your bank card and your SIM card too,” says Justin Walker, vice-president for digital transformation at Thales.

But unlike a physical wallet which can be lost or stolen, Thales’ digital ID wallet keeps all your official documents under lock and key, helping prevent identity theft, which costs the UK nearly £4bn each year, and accelerating users through customs and banking checks.

The EU is already racing ahead in this regard. Starting with a pilot programme in 2023, every member state must offer citizens a digital ID wallet which can be used throughout the bloc. Ursula von der Leyen, president of the European Commission, says: “We have no idea what happens to our data in reality. That is why the Commission will propose a secure European e-identity. One that any citizen can use anywhere in Europe to do anything from paying your taxes to renting a bicycle. A technology where we can control ourselves what data is used and how.”

A survey by Thales shows that two out of three Europeans citizens are looking forward to the arrival of an EU-backed digital ID wallet for storing their ID card, driving licence and other official documents on their smartphones. The results also reveal that 45% are relying on insecure, unofficial, DIY scans and photos of their cards and documents to help prove their identity and entitlements.

If Britain doesn’t keep pace, we will be left behind, says Walker. “We are living in a global world. The real truth is that banking, driving licences and passports will eventually all be digital, and you will only use a physical passport or bank card for countries which have not caught up yet with this technology. You will need a secure platform to issue those digital credentials, securely provision them and store them into a digital wallet to keep those items safe. If we don’t lead the way in the UK, the rest of the world will create the rules and we will have to abide by them.”

Time to catch up

Whether we know it or not, our personal information is already being held in a digital wallet. Thales already provides security for 80% of the world’s banking transactions and covers 19 out of the world’s top 20 banks. Each has a digital safe of information on individual users to improve data security. Every time you log in, your bank can immediately see which phone, SIM card and International Mobile Equipment Identity number is being used, as well as if they have been linked to any criminal activity. And that’s not all, says Walker.

“Your banking app can check up to 2,000 different parameters through Thales’ software kits. If the bank suspects it is not you using the phone or entering your password, it can start ramping up the friction to stop you entering the account.”

Now, with the acquisition of Gemalto for €4.8bn, Thales is able to allow citizens themselves to use this power safely in the form of digital wallets. A digital ID wallet will include biometrically secure personal ID such as passports, birth certificates, driving licences or Land Registry details. There is also the possibility of having more than one digital wallet, an online locked safe that relates to every area of your life. This might include a HMRC wallet – containing, for instance, instant, unimpeachable proof of tax and earnings – as well as a personal wallet with your passport, driving licence and other ID inside.

Your data at your fingerprints

The combination of biometrics and digital wallets can not only close criminal avenues but also speed up your life by removing red tape and daily hassles, says Walker. Travellers and lorry drivers won’t have to wait and show documents in a queue. Instead, they will have a digital wallet which will show their whole ID and country of origin instantly and can even have documents sent to them while they are on the move, rather than being stamped and processed.

A digital wallet can also allow discretion. When asked for ID to enter a venue, it’s possible to prove your age status without having to reveal your actual age, name or full identity. Digital wallets can also satisfy background checks without giving away all of your personal information, says Walker.

“Right now, a letting agent can ask you to submit a year’s worth of bank statements for you to be a rental guarantor if one of your children is at university. It’s intrusive. I wouldn’t want to share a year of my bank statements – but with a digital wallet I can pass such checks without needing to have a stranger know everything about me.”

Changing the perception of digital ID

Some may see the arrival of digital wallets as a step towards being forced by law to carry ID, or at least being pressed to produce identification more often. Former Prime Minister Boris Johnson once stated that if he had to carry a national ID card, he would “physically eat it in the presence of whatever emanation of the state has demanded that [he] produce it”.

But, like many across the globe, Johnson himself has changed his mind recently, stating that digital passports are key for reducing electoral fraud. In terms of digital ID, one of the most advanced countries in the world is India, which has 95% of its almost 1 billion adults signed up to its Aadhaar system. It combines a 12 digit ID number with biometric iris scans and fingerprint data, which can be held inside a digital wallet.

When examining other countries around the world, it is clear, therefore, that different levels of progress are being made when it comes to implementing digital ID wallets. The use cases and benefits of digital ID are numerous but they cannot be realised without the right kind of sup-port. Walker says the onus is on governments to use their pre-existing digital data more effectively. Allowing us to use it ourselves via digital wallets will also empower friction-free travel, trade and business.

“That is not related to the technology – it is related to the government. All of our future digital networks will have to connect internationally. In the future, only far-flung outposts will use physical bank cards and leather-bound passports. These nations will be left on the outside looking in.”

It is essential that Britain is not one of them. 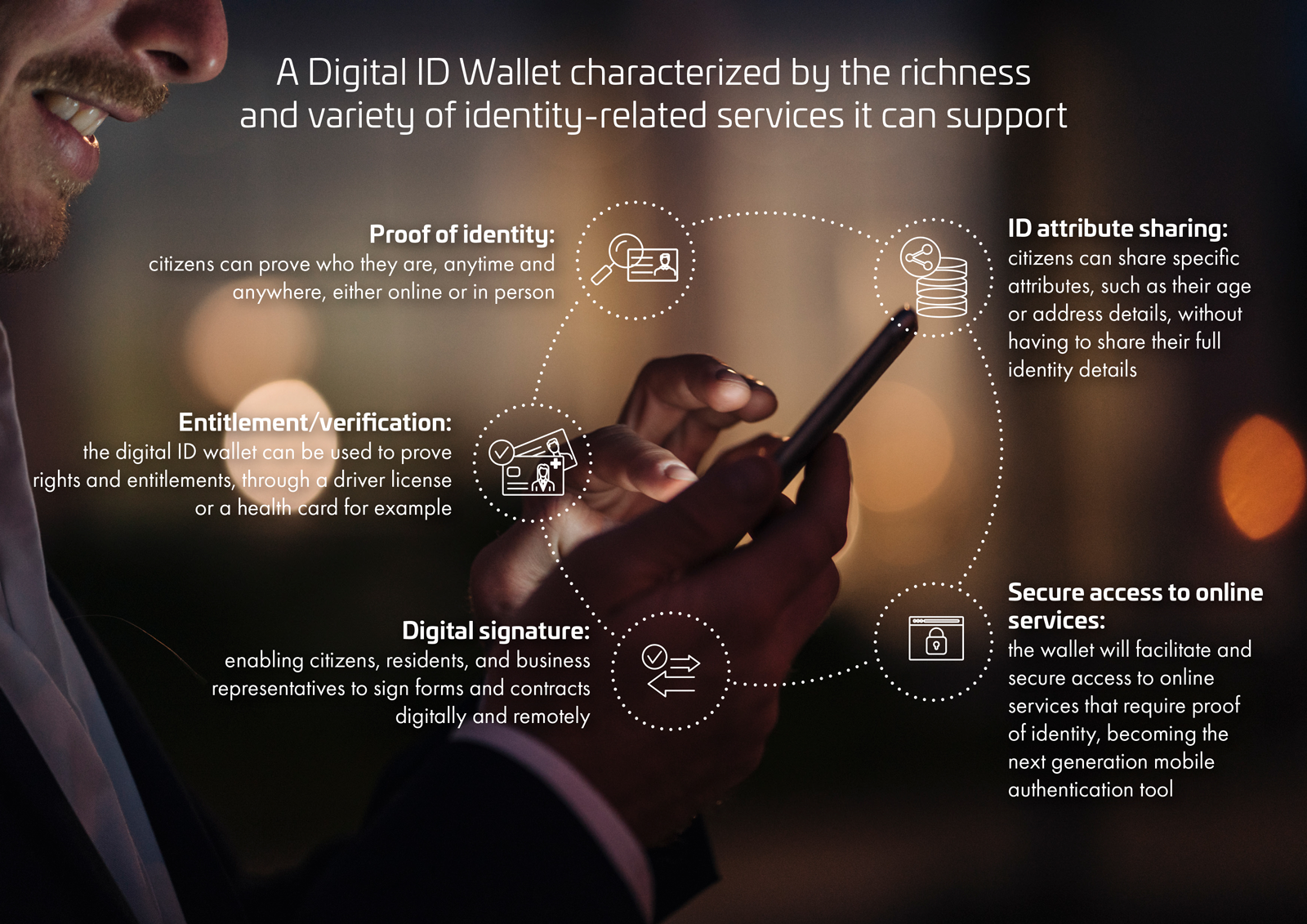