When responding to incidents, access to a dependable, secure 4G network gives law enforcement and security services a decisive tactical advantage. Thales solutions deliver unprecedented levels of surveillance, analysis, decision support and coordination. How do they do it? 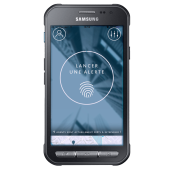 Dennis works for the city authorities. This morning he witnesses an unusual scene in a suburban neighbourhood — three individuals pushing someone into a house by force. He just has time to grab his smartphone and discreetly take pictures of the scene. Without leaving his vantage point, he quickly sends the pictures, together with his GPS coordinates, to the security control room, using the Heropolis app. Dennis’s supervisor immediately realises the seriousness of the situation and forwards all the information to the police.

Active surveillance for a faster response

As soon as the information arrives, it is analysed and cross-checked with various databases. The incident is quickly confirmed: the house belongs to the brother-in-law of an individual with a long criminal record. The vehicle parked in front of the house was reported stolen the night before. A hostage situation is likely taking place. A police patrol is immediately dispatched to the location.

Using the camera and Eiji connectivity solution installed in the roof unit of their patrol vehicle, Leila and Steve discreetly observe the surrounding area. The imagery is immediately relayed to the command post by the Eiji system, which keeps the vehicle connected at all times by continuously selecting the best available mobile network. The command post confirms that three known criminals are at the house, plus five hostages. In response, an elite unit is dispatched to the vicinity of the house. 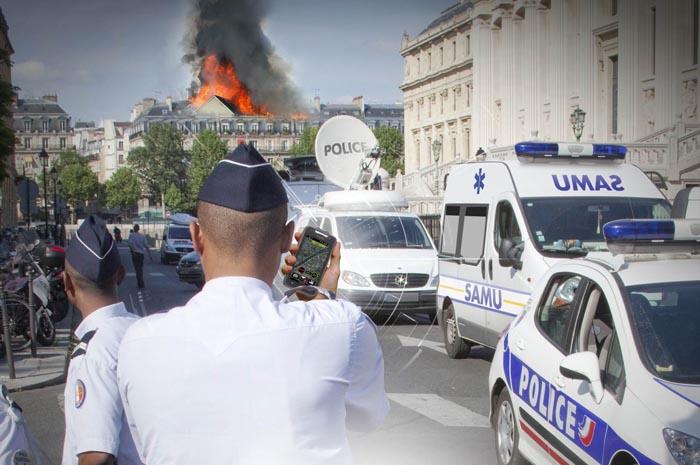 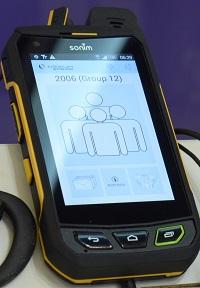 The response unit arrives at the location. While they travelling to the scene, the command post had already sent them a high-definition floorplan of the house and the profiles of the suspects. Based on this information, they decide on a strategy. Within 10 minutes of arrival, they have deployed a Nexium Wireless private 4G tactical cell, which enables them to communicate and transmit video feeds, still imagery and georeferenced information throughout the operation. Also at the location is a vehicle equipped with Eiji technology. Connected to the 4G tactical cell, it establishes a satcom link to the command post so that controllers can monitor the situation as it evolves. Typically, in this kind of situation, local residents and onlookers take to their phones, and mobile networks quickly become overloaded.

On the rooftop across the street, Kevin, a trained marksman, uses the push-to-talk function of his ruggedised smartphone to confirm that he is in position. The rest of the unit receive the image feed from his gun-sight camera and identify activity in an upstairs room of the house. Kevin’s body-worn vital signs monitor confirms his heart rate is normal and regular — he's calm, collected, and ready to cover his colleagues.

During this time, contact has been established with the suspects, but negotiations are stalling. They may need to storm the house. Conrad, who is coordinating operations, needs to take every precaution. He wants a listening device on the hostage takers, so that he can hear their conversation. An all-terrain robotic vehicle is brought in discreetly and quickly crosses the rear garden of the house to set up a microphone.

As darkness falls, the decision comes directly from the Interior Ministry, where officials have been monitoring the situation live on their screens and communicating with the response unit. The order to storm the house is given. The officers switch their handsets to discreet mode and approach the building. The command post monitors their progress via their night-vision body cameras. Kevin’s heart rate has increased, but he is fully focused.

Suddenly, an explosion is heard, followed by a series of gunshots. For a few moments, only the eight members of the response unit inside the house know what has happened. Smoke obscures the image feed from their cameras, but their vital signs monitors show that no one is wounded. The hostages emerge through the front door of the house and are immediately assisted by the paramedics at the scene. Seconds later the hospital receives all the information needed to treat them on arrival.

The hostage takers are led away in handcuffs, and the unit starts packing up. Normal communications are restored — and the network is immediately saturated by local residents calling family and friends to reassure them, sending texts and tweets, sharing videos of the police operation and posting about it on social media. The operation is a success, thanks in no small part to effective communications and all the tactical advantages offered by secure, permanently available high-speed networks.

Eiji by Thales
The secure mobile solution from Thales. Permanent connectivity and multi-operator access for maximum efficiency on critical missions.