Welcome to the carrier’s tower of air power

Imagine the glass of a flying control tower so strong that it could withstand a strike equivalent to a direct hit from the blade tip of a Chinook helicopter... Welcome on board HMS Queen Elizabeth.

With more than 10,000 people involved in the Queen Elizabeth Class programme, the delivery of the Royal Navy’s two aircraft carriers has been an engineering challenge on an unprecedented scale right across the UK supply chain.

The Aircraft Carrier Alliance (ACA) has brought together specialist companies and experts across industry to provide the most innovative solutions. And one of the most distinguishing features of the ship – her unique twin island design – incorporates supply chain partnering at its best.

As a founding member of the ACA, Thales (like its partners BAE, Babcock and the Ministry of Defence) has specific responsibilities within the alliance. One of these is the leadership of the platform design and aviation teams. 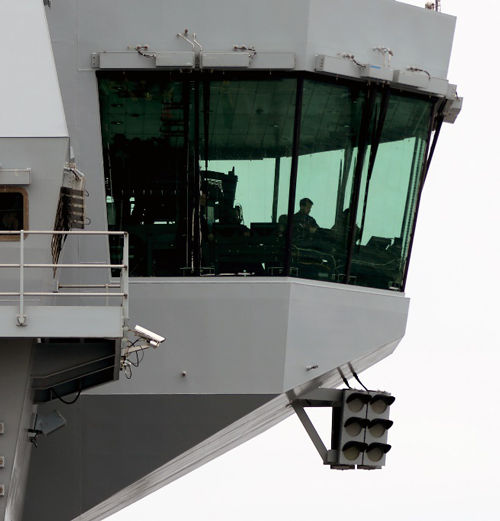 The unique twin islands means that the ship has a dedicated rear island to direct air operations, while the forward island and bridge controls the ship’s navigation. Both islands are designed to switch functionality if required, giving the carrier a key redundancy factor in an operational environment.

The glass flying control position (or FLYCO), fitted onto the rear island, is the operational centre controlling all air operations and is closely linked to the ship’s operations room, navigation bridge, flight deck and hangar operations centre.

As part of its aviation lead responsibilities, Thales led the procurement of the FLYCO from the Special Projects division of Ipswich-based key supplier Tex ATC Ltd, one of the world’s leading providers of military and civilian airfield visual control rooms.

The FLYCO position provides the operators with an unparalleled operational working space, with three metre tall specially glazed panels, giving more than 290 degrees of view over the flight deck. The multi-layered glass – designed to provide solar and noise protection – is also incredibly strong.

Thales originally approached Tex ATC as an acknowledged specialist in delivering state-of-the-art flying control solutions. The company had previously designed and built the visual control room at RAF Coningsby in preparation for the arrival of the Typhoon aircraft.

Tex ATC’s experience in specialist control environments for military applications led to their delivery of visual control rooms at RAF Linton-on-Ouse, RAF Mildenhall, RNAS Yeovilton and Camp Bastion in Afghanistan. Around 100 people in the company and its supply chain have been involved in the delivery of the FLYCO.

(In memory of the late Mike McCarthy who was the Managing Director and lead designer at Tex Special Projects for the Queen Elizabeth Class programme).