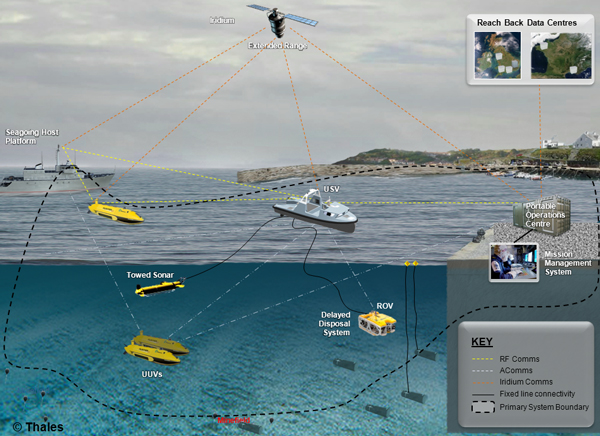 On behalf of the French Defence Procurement Agency (DGA) in France and UK MOD’s Defence Equipment & Support organisation, OCCAr1 has awarded the Maritime Mine Counter Measures (MMCM) contract to Thales, in collaboration with BAE Systems and their partners in France (ECA) and in the UK (ASV, Wood & Douglas, SAAB). Initiated in 2012 under a cooperation agreement between France and the United Kingdom, the MMCM programme develops a prototype autonomous system for detection and neutralisation of sea mines and underwater improvised explosive devices (UWIEDs).

As part of the MMCM programme, Thales is committed to providing systems to both the French Navy and Royal Navy for two years of evaluation testing. Each system will comprise a USV (Unmanned Surface Vehicle) equipped with an autonomous navigation system, an obstacle detection and avoidance sonar, a threat identification and neutralisation capability based on Remotely Operated Vehicles (ROVs), a Towed Synthetic Aperture Sonar (T-SAS) and Autonomous Underwater Vehicles (AUVs). The geolocated AUVs will use the latest generation synthetic aperture sonar SAMDIS with multi-aspect functionality for improved classification. They will perform their tasks autonomously with control from a host ship or shore-based station via high-data-rate communication links.

The project will be delivered by an integrated team including personnel from Thales in France and the UK as well as BAE Systems. French and UK contractors involved in the MMCM system include ASV Ltd for the supply of the surface vehicle, ECA for the supply of the underwater  unmanned vehicles, SAAB for the ROVs and Wood & Douglas for communications.

Thales will deliver the integrated Portable Operations Centre (POC) solution, which will incorporate command & control by Thales and BAE Systems. BAE Systems will provide the Mission Management System, managing the command and information systems, as well as the ROVs, the virtual visualization and experimentation suite.

The launch of this programme builds on the Lancaster House defence and security cooperation treaties signed in November 2010 and follows on from the Franco-British summit held on January 31st 2014.

About Thales
Thales is a global technology leader for the Aerospace, Transport, Defence and Security markets. With 61,000 employees in 56 countries, Thales reported sales of €13 billion in 2014. With over 20,000 engineers and researchers, Thales has a unique capability to design and deploy equipment, systems and services to meet the most complex security requirements. Its unique international footprint allows it to work closely with its customers all over the world.