The first autonomous car can be dated back to the 1980s, in a project funded by the United States Defense Advanced Research Projects Agency.

Called the NavLab, It looked like a postal delivery truck. It bore little similarity to Google's driverless car (without a safety driver), which was first demonstrated on Arizona's roads in 2017.

Since then, technology has continued to evolve and sparked all manner of predictions about how autonomous cars will transform the way we live and work.

Here are some of the more intriguing predictions.

The United States Department of Transportation (USDOT) predicts that the rise of driverless cars will see the number of traffic deaths fall drastically.

This prediction makes sense when you think about it.

But this is not just due to a reduction in accidents.

Ohio University's Future of Driving report states that harmful emissions will be reduced by 60% after the advent of autonomous vehicles.

According to research at the University of Illinois at Urbana-Champaign, autonomous cars could eliminate the waves of traffic created by stop-and-go behavior (where humans, rather than road accidents, develop changes in speeds).

This, in turn, will not only save people time but decrease the time their cars are on the roads and therefore reduce emissions.

Rand’s Autonomous Vehicle Technology guide states that self-driving cars will provide a reduction in fuel economy by between 4% and 10%.

This is supported by the Ohio University study, which puts a figure of 3.1 billion gallons of fuel as the amount wasted by US drivers each year.

The same Rand report also predicts that lane capacity could increase by a staggering 500%.

The State Smart Transportation Initiative only puts this figure at 100% (still an impressive increase), which it says, in turn, could result in a 20% increase in traffic speeds.

UK citizens’ travel time could be reduced by 40%, according to KPMG’s Connected and Autonomous Vehicles – The UK Economic Opportunity.

A saving of £20bn in increased productivity and better use of time for people who would otherwise have been traveling in vehicles.

Meanwhile, in the US, autonomous cars are expected to save workers 80 billion hours lost to commuting, which will save the economy US$1.3tn.

In the UK, according to KPMG, the savings to be had on reduced insurance costs, reduced running costs, and parking mean the UK consumer market would save £5bn a year.

Autonomous cars are also expected to solve the 'last mile problem' (whereby people struggle to travel the final mile between their home and the public transport drop-off point).

It should supplement public transport, utilizing the reduction in traffic and the autonomous car's ability to find a parking space and park all by itself.

Moreover, there is a predicted drop in taxi wait time of 88% when autonomous taxis are used, 15% less space needed for parking and enhanced mobility for seniors in an aging population. 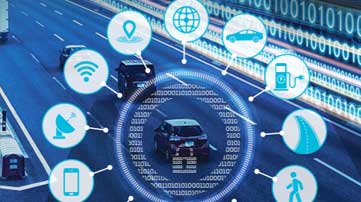