Unlike traditional energy grids, designed primarily for one-way distribution from producer to consumer, smart grids use the Internet of Things (IoT) technology to add intelligence and monitoring into every node.

Here, in Q&A format, is what you need to know about the smart grid, its benefits, its “self-healing” capabilities, and some of its security challenges.

Discover the answers to these eight questions to help you understand the transition.

A smart grid is an IOT-enabled application that allows utilities and their customers to exchange electricity and information.

In other words, it's the two-way data flow that makes a grid "smart."

A smart grid includes, in particular, smart meters, renewable energy resources, and smart appliances on the consumer side.

Major utilities are modernizing the grid to make it more efficient and reliable.

These populations critically depend on the reliable distribution of electricity. Brownouts or blackouts can severely impact safety and security in such urban environments.

The simple truth is that most urban electric infrastructures are aging and being pushed to their limits and beyond.

The day-to-day challenge is very often just to maintain reliability.

If we’re going to keep those cities habitable and embrace sustainable ways of generating energy and getting around, we’ll have to move to smart grids (and embrace IoT solutions).

So, how are smart grids better than regular grids? 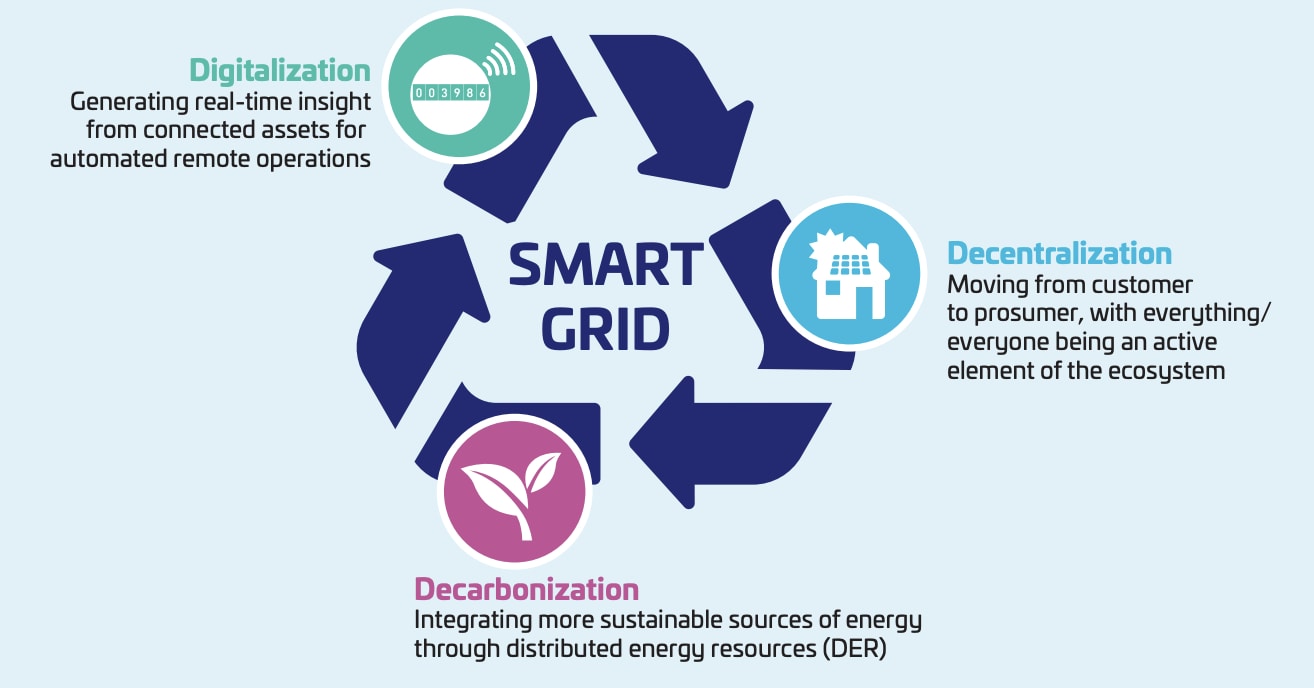 Smart grid technology is transforming the grid and brings many benefits.

#3. What are the advantages of the smart grid?

Smart grid applications can balance the flow of power more efficiently. They can detect surges, outages, and technical energy losses.

They can also spot waste and fraud – savings that will be passed to customers.

Peak loads or fluctuations can be dealt with immediately and automatically.

For example, a heatwave can be managed more effectively.

A storm impact can be reduced much faster.

Energy is delivered evenly and managed efficiently, which is good news for both utilities and consumers.

However, renewables' inherent unpredictability creates more challenges for those who need to run the flow of power to and from homes, businesses, and – increasingly – electric vehicles (EV).

Coping with the growth in supply and demand for clean energy requires new ways of thinking about energy management.

The smart grid will ensure that this energy can be stored safely and distributed where and when it’s needed.

In other words, with IoT-connected devices in every meter, solar panel, and car collecting real-time data, decision making about what energy is directed where can become automated.

This process unlocks new models for buying and selling energy to the grid for consumers at home.

And renewable energy use is growing fast around the world. In 2019, more than 75% of all new power generation globally came from renewables.

Of course, the first reason is that many national and local governments have set targets for increasing the percentage of energy generated through renewables, in line with international accords such as the Paris Agreement signed in 2016.

Fewer greenhouse gas emissions will reduce the long-term effects of climate change, and in the short term, it reduces air pollution, which in Europe alone often exceeds levels proscribed by standards.

The smart grid will contribute to the transition to clean energy, crucial to a survivable future.

The key to this is building “smart grids.”

Unlike traditional energy grids designed primarily for one-way distribution from producer to consumer, smart grids use the Internet of Things (IoT) technology to add intelligence and monitoring into every node.

The near-real-time sharing of data allows the system to know when and how electricity is being used, and IoT devices respond to grid conditions in return automatically.

Utilities are making the power grid smarter and “self-healing” with new technologies.

The grid is more agile with the IoT and can identify faults using communication diagnostics, isolate a failure accurately, and react. It can then reconfigure the flow of electricity, re-energize parts of the grid, and protect the power infrastructure.

This means a shorter duration of outages and faster recovery.

Here we talk about minutes instead of hours.

The idea is that FLISR technology improves the overall reliability of the distribution network.

Needless to say, this process requires the use of high-performance IT infrastructure, automated command and control, IoT-enabled devices, communication networks, and tight security to achieve this objective.

#6. What are the smart grid security challenges?

Already, hundreds of trials have taken place in the UK, Germany, the US, India – all around the world – to test systems that even allow consumers to sell directly to each other using peer-to-peer trading and smart contracts.

Besides, traditional suppliers are finding more efficient and accurate ways to read meters and issue bills.

None of this, however, can happen without robust cybersecurity in everything connected to the smart grid.

On the other hand, strong security builds consumer trust and will help grids of the future to proliferate.

“A critical element for energy stakeholders is to make sure that the assets they produce or manage are well protected and that their security can evolve,” says Willem Strabbing, Managing Director at the European Association of Smart Energy Solution Providers (ESMIG).

“We mean assets which are implemented for long periods - often more than ten years - and that are appealing for hackers to modify consumption information, to get access to private data, or to cause critical damage on global grids.

“In this context, governments or regulators are calling for specific protection protocols that could be based on strong encryption and authentication tools, protecting devices, and enabling proper security updates.”

Security by design is vital for the grid.

Strabbing says that security by design is vital.

Security by design means anticipating and mitigating against threats right from the very beginning of product development and building in the ability to support devices throughout their full lifecycle.

It means ensuring firmware updates and key management for a network of millions of devices is easy.

“The biggest mistake that metering companies can make is failing to future-proof their products,” Strabbing adds.

“In particular, it can be short-sighted to lock-in with one vendor or to design meters that can´t incorporate future technologies or support updates.”

Beyond hacking: when things go wrong.

It speaks to the overall smart grid's resilience.

Security in the smart grid means ensuring that all risks are managed when – inevitably – things go wrong.

"Security is a learning process," according to Michael John - Chief Information Security Officer (CISO) at WePower Network and previously the Director of Operations at the European Network for Cyber Security (ENCS) -  "and smart grid security solutions will take time to develop."

“Years ago, security wasn’t high on the agenda,” John says, “But everyone now has a Chief Security Officer and project leads who take care of security for new projects."

"The challenge is that legacy systems weren’t interconnected, automation has to be introduced over time, and new processes need to be in place to protect systems that were never designed to be secure.”

All of this makes a structured approach to IoT security essential.

#7. IoT interoperability and the smart grid: where do we stand?

Like Rome, energy grids are not built in a day.

Multiple generations of hardware from different suppliers have to co-exist as grids evolve into distributed energy systems.

Interoperability is critical for the smart grid, as data is gathered, shared, and acted upon from all network points.

As it stands, however, interoperability in the smart energy space has three dimensions:

So, alignment is needed here.

The IoT is no longer a largely unregulated Wild West. Regulations tackle privacy and security.

#8. Smart grids and the role of regulation

Authorities are becoming increasingly conscious of the possible threats that weak cybersecurity in the smart grid may introduce.

ESMIG, which represents European metering companies, has defined a common set of security requirements for smart meters based on the requirements found in EU member states.

The meters produced by ESMIG members comply with these requirements.

In December 2018, the EU agreed to initiate the new Cybersecurity Act, introducing standardization and certification for a wide range of internet-connected devices, including the smart grid.

What's more, the EU's General Data Protection Regulation (GDPR - for data privacy) also introduced in May 2018 a range of requirements that affect smart meters and the kind of data they collect.

Over in the US, California's SB 327 Law, effective from January 2020, requires all connected devices to have "reasonable security features."

California’s IoT law is a significant first step as it targets both IoT devices and basic cyber-attack methods that can leave consumers vulnerable to security and privacy risks.

SB-327 places liability (and burden of proof) on the IoT vendors if the device is connected to the Internet in California.

Oregon (HB-2395) joined California with a very similar text that went into effect on 1 January 2020.

More widely, the North American Electric Reliability Corporation is responsible for the US and Canada grid and has introduced various rules for how utilities must protect the grid electronically.

If you have a question about smart grid technology or security or want to learn more about how IoT technology is transforming utilities, we’ll be glad to help.

We’re looking forward to hearing from you.