Agriculture is on the cusp of its fourth revolution. The sector is using smart farm technologies such as artificial intelligence, machine learning, robotics, drones and 5G, which promise to make the sector cleaner and more efficient than ever.

Do you recognise this cow? 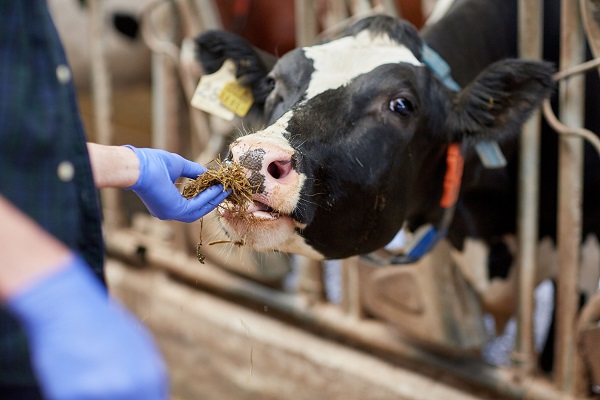 Probably not. For most of us, all cows look the same. But for livestock specialists, the ability to know and track individual animals is extremely important.

Now, with the arrival of facial recognition, it’s possible for machines to do it – fast and at scale.

Yes, facial recognition is coming to the farm. Start-ups such as Ireland’s Cainthus use computer vision to identify cows (and soon other animals) in order to track key data such as food and water intake, heat detection and behaviour patterns. The company's software then crunches this data to let farmers make better decisions about milk production, reproduction management and overall animal health.

It’s just one example among the many smart farming innovations that are transforming agriculture.

In truth, this technological revolution is coming a little later to agriculture than to other market sectors such as automotive, logistics or advertising.

This is because, unlike them, the fundamentals of farming cannot be reduced to bytes.

You can't digitise a chicken.

But if the product itself cannot be transformed, the methods of production certainly can. Today, a collection of key digital technologies already proven in other markets is helping farmers to unlock new efficiencies, eliminate waste and create an interconnected digital ecosystem that tracks commodities from the farm to the market.

Why is smart farming so important?

While innovation and digital transformation is happening in many industries, in agriculture it is essential for the future of the planet and for human flourishing.

The World Economic Forum predicts the global population will hit 9.8 billion by 2050, which means we might need to grow as much as double the amount of food we do today – and do it without significantly stretching finite resources such as land and water.

But there are reasons to be positive. Historically, human ingenuity has risen to the population challenge. 8,000 years ago in the first agricultural revolution, the plough transformed productivity. In the 1800s, inventions such as the seed drill brought a degree of mechanisation to farming. Then, in the mid-20th century, there were major breakthroughs in artificial fertilizer and plant science.

Now, we are entering a fourth age of agriculture. Innovation is exploding, and VC money is pouring in. According to a report from Finistere Ventures and PitchBook Data, investment in the space soared to $22.3 billion in 2020. To put this into perspective, total investment since 2010 stands at $65.4 billion.

Innovation is impacting every corner of agriculture. In a report on smart farming, technology titled From Agriculture to AgTech Deloitte identified five key opportunities:

Food technology and artificial meat
Huge strides are being made in plant-based and cell-based protein sources.

Contained and vertical farming
Smart greenhouses and contained hydroponic farming is ultra-efficient and can be done in urban locations.

How is smart farming technology using the IoT and 5G?

The digital transformation of agriculture is not theory. It’s real. And it’s having a huge impact across all aspects of farming. Here are some examples. 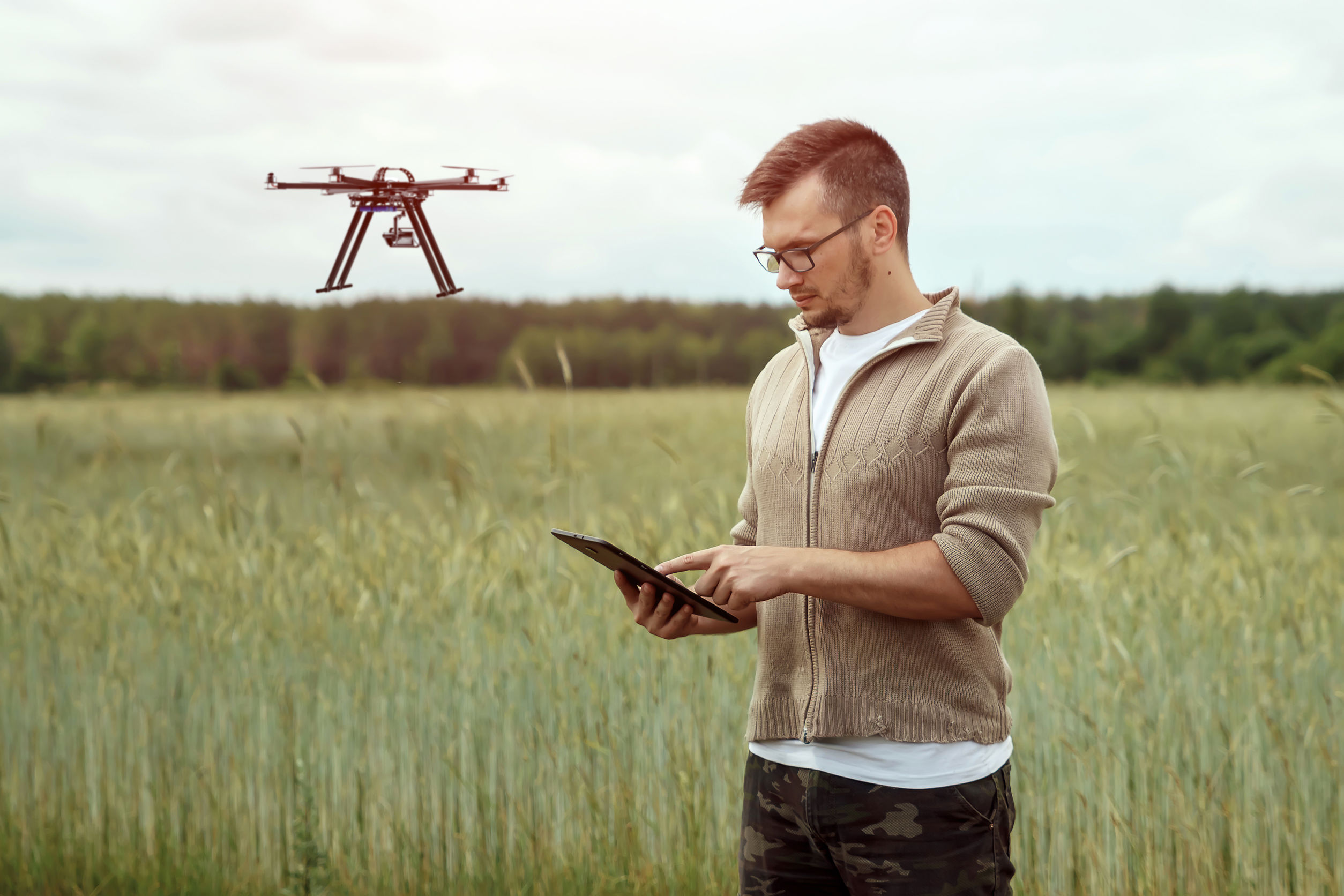 Then it unleashed its XAG XPlanet drone on the same task. The unmanned aerial system followed a pre-programmed route and dispensed rice seeds from the air. It completed the job in 120 seconds. Smart farming 1: human labour 0.

The impact of drones on farming cannot be underestimated. Drones are not just faster in their work, they are also more efficient and environmentally friendly. Xag claims its system can use up to 90 per cent less water and 30 percent fewer chemicals than traditional techniques. It’s also more accurate. Using a tech Xag calls JetSeed, it fires seeds at up to 18 m/s. This stops wind from carrying any seeds away. The result? 80 times more efficient than manual seeding.

Commercial drones are one of the fastest growing sectors of the IoT and 5G will play a key role in enabling this growth.

# Smart agriculture and the IoT: a ‘ball’ to keep grain fresh

In a business as dispersed and remote as farming, the smart sensor can be a transformative technology. It can drastically reduce wastage and improve yields.

It’s a sensor embedded in a ball, which the company describes as looking like a dog’s chew toy. Farmers drop the device into a pile of grain. The ball transmits data multiple times a day about the temperature and humidity in the facility.

This data is delivered wirelessly to the cloud, where TeleSense’s machine learning algorithms look for meaningful trends before sending the information to the TeleSense app.

And with the arrival of LPWAN, now there’s energy efficient and IoT-optimized connectivity available that can connect these sensors for 10 years or more on a single battery charge.

# The robot that looks after chickens

Ain’t nobody here but us chickens… oh, and a ceiling-suspended robot called The ChickenBoy.

Barcelona-based start up Faromatics has attracted a lot of attention – and won many smart farming awards – for its EU-funded invention: a robot that lets chicken farmers autonomously monitor their stock. The rail-mounted robot glides along the ceiling and uses a set of sensors to measure thermal sensation, air quality, light and sound in poultry housing.

Farmers can use a cloud platform to configure The ChickenBoy to send mobile alerts.

One of the big challenges for smart farming technology to date has been connecting its sensors and tracking devices. Farms are big. They are usually remote. So it can be a struggle to connect these objects via 3G or 4G. Meanwhile installing Wi-Fi connectivity across thousands of acres of fields is something only the biggest and most well resourced farmers can do. 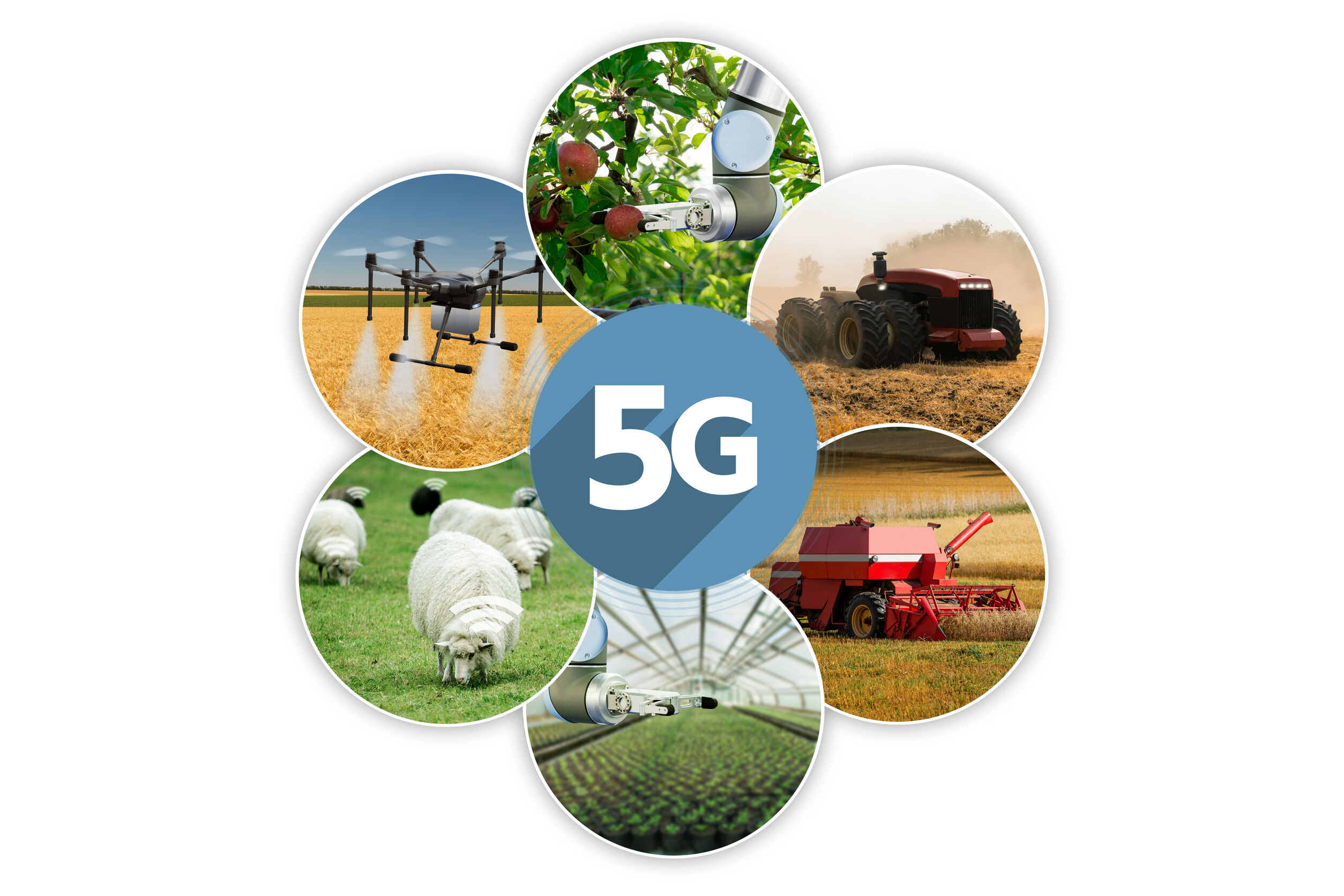 5G farming solves virtually all of these problems. Low-latency, accessible-anywhere 5G can connect 100 times more devices per square kilometre than 4G. It can move data at up to 100x higher speeds.

The first 5G farming experiments are already in progress. One of the most eye-catching is taking place at the Sinkaberg Hansen Gjerdinga island fish farm in Norway.

Here, a handful of farmers manage one million salmon via a central feeding system. They monitor the process on multiple cameras placed near the cages. This is not always straightforward. The water can get murky. Cameras malfunction. Norway is dark for most of the day in winter.

When farmers can’t see properly, they risk over or under feeding, pollution and spillage.

Hi-res cameras would fix the problem. But existing 4G networks do not have enough bandwidth to transfer the video back to the central location. Meanwhile fibre cables often break over the long distances.

Hence the 5G farming trial hosted by Telenor and aquatech firm Bluegrove. 5G is resilient, accessible and meets the bandwidth requirements of hi-res real-time video. For the Sinkaberg Hansen Gjerdinga use case, the applications were deployed and processed on an edge server. This minimised the latency. Bluegrove believes the cost savings for Sinkaberg Hansen could be up to 50 million NOK per year.

One of the better-known applications of machine learning comes from medicine, where systems can scan large data sets to detect signs that might indicate disease. A skilled human specialist could do the same job, but it would take years.

Clearly, the same pattern detection applies in smart farming technology. Today, a number of firms offer solutions of this kind. One is Pattern Ag. It uses machine learning technology to detect a range of diseases and pests in plants. For example, it can detect a single rootworm egg in a 1lb soil sample.

The system can attack the problem as well as diagnose it. It uses its detection insights to decide which herbicides to apply – at just the right amounts. As with so many other smart farming innovations, this is more efficient and more environmentally friendly than before.

Pattern Ag estimates that 55 percent of US fields are protected with rootworm insecticides even though just 18 percent are at economic risk. Farmers over protect this way because they don't know the levels of their rootworm infestation.

The task of feeding 9.8 billion mouths by 2050 is one of the greatest facing humanity. But human ingenuity has risen to similar challenges before. Thanks to smart farming technology, there is good reason to be confident for the future.

7 ways farming is getting smart (Infographic)

How the IoT will be good for the planet