Making a quantum leap in global telecommunications coverage, with Iridium® NEXT

Since early Februrary 2019, Iridium® NEXT constellation has been fully operational.In less than 2 years, 75 satellites, each weighing 850 kg, were orbited by SpaceX in eight different launches This was thanks to close teamwork among Iridium, Thales Alenia Space, Northrop Grumman and SpaceX.  We managed together to replace an entire constellation of Low Earth Orbit telecommunications satellites.

The most sophisticated communications system in the world

Iridium® NEXT is the largest low-orbit satcom constellation in the world, comprising 66 interconnected satellites, operating from an altitude of 780 kilometers. These satellites were designed to gradually replace and significantly improve the original Iridium constellation, which had come to the end of its life. A new global network providing unparalleled capacity for communications on the move, whether for individuals, land vehicles, ships or planes, Iridium NEXT offers true planetary coverage, including the oceans and poles.

For Thales Alenia Space, prime contractor of the overall end to end system for Iridium – from design to operations - , the challenge was not just to deliver the satellites, but above all to implement a complete turnkey system and to ensure that the old and new satellite generations were compatible. Iridium NEXT marked a major world first, with an operator and manufacturer working hand in hand to replace the first constellation by a new one, satellite by satellite, without interrupting user service while improving the performances of the constellation !

Thanks to the Inter-Satellite-Linksthe system is totally independent from local ground infrastructure, which guarantees secure communications, including protection against intrusion and piracy. This complex communications system, recognized for its robustness and sophistication, is the only one of its kind capable of functioning over oceans and seas, which cover 70 percent of our planet. In the case of hurricanes, tsunamis and other natural disasters, the constellation can provide significant help in keeping vital communications links open. In fact, this happened in the fall of 2017 when the constellation provided critical communications after the terrestrial network in Puerto Rico was largely destroyed by Hurricane Maria.

Iridium NEXT, the custom-tailored constellation

Thales Alenia Space and partners have always worked in synergy with Iridium to deliver the satellites in orbit as quickly as possible, while meeting the highest quality standards. To deliver such a large and complex constellation,we had to rethink both our supply chain management and our industrial processes. The revamped supply chain encompassed not only components and subassemblies, but also integration of the satellites themselves so we could ensure a delivery rate of five satellites per month, an unrivaled performance in this class. Over and above the technological aspects, Thales Alenia Space also led  up all satellite positioning and in-orbit testing phases, from the Iridium Satellite Network Operations Center (SNOC), in Leesburg, Virginia.

The global benchmark in communications constellations 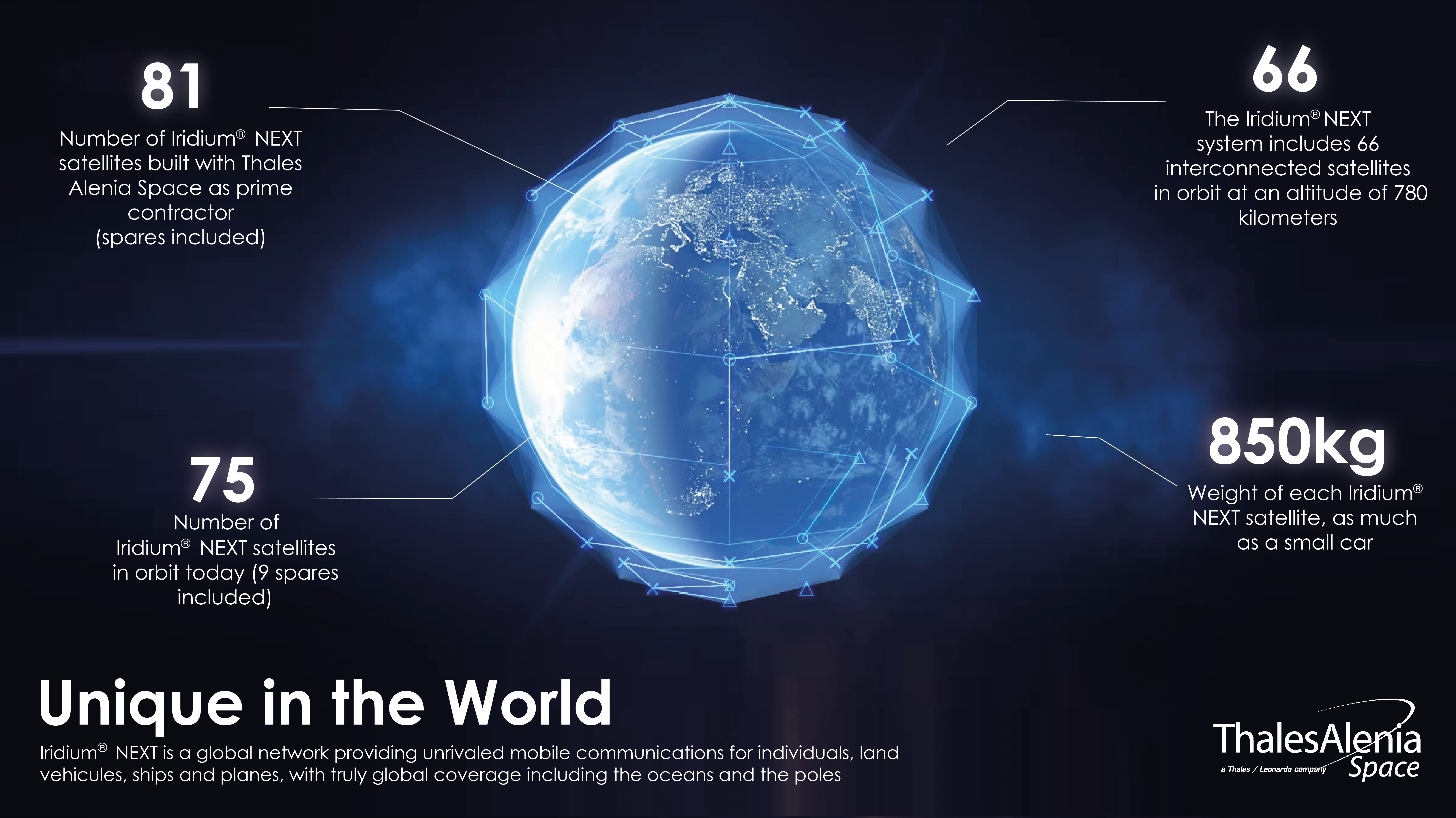 &lt;p&gt;The successful launch of the third cluster of O3b satellites on December 18, 2014 bolsters Thales Alenia Space&#039;s global leadership in the market for constellations of telecom satellites. It now has total orders for 117 of these satellites from Globalstar, ...

Future trends for the Space market

It’s here, the first system to deliver high data-rate communications right into the cockpit, at any point on the globe. So, what&#039;s the secret behind FlytLINK? Here’s how the Iridium constellation of low-earth orbit satellites is making more possible. Read on. ...