Maritime Mine Countermeasures Programme (MMCM): The success of at-sea demonstrations turns the spotlight to the future

In 2015, with growing numbers of mines in the world’s oceans, France and the UK set themselves a clear mine countermeasures (MCM) challenge: to drive a step change in their navies’ mine warfare performance and significantly improve the safety of personnel. The ambition was immense: the development of an integrated, high-tech, ‘system of systems’ that could be flown quickly across the world; to make rapid programme progress, in an area with no established doctrine; and to have cast-iron certainty on reliability, autonomy, and cybersecurity.

With such high stakes, the breadth of skills and experience needed to make this vision a reality had to be equally ambitious. It would include a substantial capacity for high-tech R&D and the capability to manage and deliver complex projects. After a demanding, three-year competition, the countries selected Thales to lead the work. Its brief? To rigorously demonstrate fully unmanned MCM, in challenging seas – within five years.

Fast forward to today and the navies’ audacity has been rewarded. A reliable, ‘first-of-its-kind’ system has been thoroughly demonstrated and will be delivered against requirements. How though was this success achieved? First, Thales’s commitment matched that of the navies. With a heavy responsibility as both prime contractor and systems integrator, it invested hugely in both technical and people development, inspiring confidence in its leadership of a complex network of partners. For example, fully simulating system behaviour considerably reduced the risk of wasting time, or assets, at sea.

Right from the start, a key Thales theme was to connect suppliers to front line naval personnel and operators. Extensive visits to bases and ships built an understanding of real user needs – not just theoretical requirements. This meant the French and British naval teams, Thales, and key suppliers, ECA, L3Harris, Kongsberg, and SAAB, were able to work as one team: full commitment was crucial on a journey with no well-worn paths. 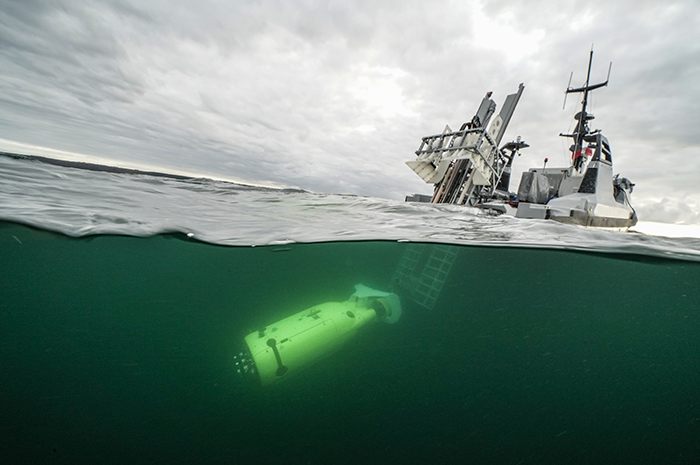 Local facilities were key too. Thales developers’ proximity to end users at its established facility in Brest, France, enabled the delivery of an HMI that was carefully tailored to the needs of naval personnel. Investment in a new UK Autonomy Centre at Turnchapel Wharf, in the UK, paid dividends too. With rapid access to the deep waters of the Plymouth Sound and a local maritime skills base, by 2018, it had attracted universities, laboratories, and marine leaders; it is now becoming a hub to serve other navies as they explore their own unmanned journeys.

Another factor was agility, thoroughly tested in a first phase that saw considerable development of the original concept, something that had to be done in a spirit of co-creation and with maximum flexibility. The agility also became more logistical in a Covid world, with one senior manager observing that having a Plan B became having Plans B, C, D, and E.

The final, and most exciting, challenge in MMCM Phase I was the demonstration of the system of systems in back-to-back, at-sea tests, in Brest, Toulon, and Plymouth, involving a complex set of scenarios and sub-scenarios. Carried out in autumn and early winter, testing was ramped up rapidly from 8-10 hour slots to 24/7 evaluation. The unmanned vehicles covered an equivalent of 30,000 football pitches – demonstrating an outstanding, threefold, increase in MCM productivity, compared with purely conventional approaches. Dozens of mines were detected, in all environmental conditions, and then classified and localised to clear the seas of threats.

Where next for MMCM? For France and the UK: Stage II, for which Thales is already putting in place full-scale production facilities, reinforcing global supply chains, and creating new ecosystem teams.

The opportunity to work with the French and British navies on MMCM’s groundbreaking work has enabled Thales to build deep expertise that can also serve other allied navies. Embracing the unmanned future is an exciting prospect, but it needs sound advice on the most technically viable and economically advantageous options – both full standoff (100% unmanned MCM, operated remotely from a manned mothership or operations centre) or hybrid (a combination of unmanned and manned systems, operated from a vessel at the minefield). MMCM has enabled Thales to develop the vital underpinnings for this, for example by developing a best-of-breed, global supply chain for unmanned MCM, and gaining a clear understanding of make-or-buy decisions.

Thales brings all this learning together in PathMaster, a complete approach designed to help customers cut through the complexity of unmanned mine warfare and explore the solutions that meet their future MCM needs and budgets. The spotlight is now firmly on the unmanned future.