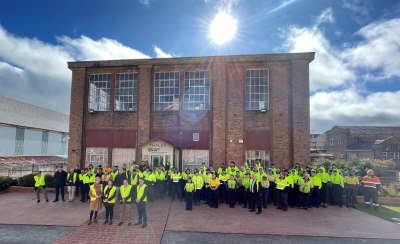 The funding will be matched dollar for dollar by Thales Australia and will be invested in modern manufacturing capability and equipment at Thales’ Lithgow site with the aim of creating a further 56 jobs to increase production capacity on both military and civil manufacturing lines, as well support export growth over the next three years.

Lithgow Arms currently exports its world-leading small arms to 17 countries and has been a key industrial partner to the Australian Defence Force providing small arms and weapons systems, as well as providing end to end logistics and sustainment, to its soldiers for more than a century.

“Lithgow Arms is the only small arms manufacturing capability of its type in Australia and we are proud to be a major employer in regional NSW. Our workforce is highly skilled and multi-generational.”

“Lithgow Arms has a proud 110-year history of sovereign small arms production for Defence and this is part of a plan for the next phase of production.”

This grant further builds on Thales Australia’s $70 million investment over the past decade to develop the Lithgow facility, including the new $6.5 million building currently under construction at the site to create a modern manufacturing and integration hub for the design, development and precision manufacture of next generation weapons systems for the ADF and our industrial partners and export customers.

Since 1912, Lithgow has proudly supported Australia’s soldiers on battlefields around the world. From Gallipoli, Fromelles and Pozières to North Africa, Borneo and Kokoda, and from Korea, Malaya and Vietnam to East Timor, Iraq and Afghanistan, Australian troops have carried weapons made in Lithgow.

We are proud of our heritage and people. For over 100 years the men and women of Lithgow have supported the production of small arms, and the Australian Defence Force at home and abroad.

Lithgow Arms is a local business employing over 140 people in regional New South Wales. Working with over 120 Australian SME, more than 90% of content used in production is either sourced from local Australian businesses or made on site. Over the past decade more than $75m has been invested in site infrastructure and equipment to modernise small arms manufacturing in Australia.

Thales Australia has a history of patient investment to build advanced in-country capability across manufacturing, critical systems and services. Close collaborative relationships with local customers, Australian SME suppliers and research institutions combined with technology transfer from our global business enables Thales to tailor high-quality solutions for Australian and export markets, generating revenue of $1.6 billion in exports over the past 10 years.