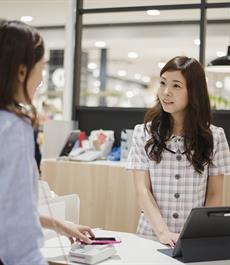 Thales and Dai Nippon Printing​ (DNP) are providing a cloud-based payment service supporting Apple Pay. An easy, fast, and secure way to pay, the service will launch in Japan in late October 16.​

This service provides credit, debit, and prepaid card companies with cloud-based payment solution to deploy highly secure payment with smartphones thanks to a  tokenization technology which replaces a credit card number with a surrogate number.

Major credit card issuers have announced their participation in Apple Pay​, so they can offer their customers this convenient and private way to pay. ​

Apple Pay, launched in the US in 2014, lets customers make easy, fast, and secure payments in stores, apps, and on the web right from their supported Apple devices. Apple Pay is available in Japan for payments in stores and on transit with the newly announced iPhone 7, iPhone 7 Plus, and Apple Watch Series 2 purchased in Japan.

Online shopping in apps and on websites accepting Apple Pay is as simple as the touch of a finger with Touch ID, so there's no need to manually fill out lengthy account forms or repeatedly type in shipping and billing information.

When paying for goods and services on the go within apps or Safari, Apple Pay works with iPhone 6 and later, iPad Pro, iPad Air 2, and iPad mini 3 and later. You can also use Apple Pay in Safari on any Mac introduced in or after 2012 and confirm the payment with iPhone 6 or later or Apple Watch.&

Since 2012, DNP  has been providing 'Mobile Wallet Services', which centrally manages payment solutions with smartphones,  in addition to NFC smartphone card issuance services for financial institutions.

In partnership with Thales, the world leader in digital security, DNP started in 2015 to provide a cloud-based payment service platform that allowed NFC mobile phones to add a payment function through mobile networks.

DNP and Thales are pleased to announce that Apple Pay is now available on this service​.

See what's happening behind the scenes. Learn more from our customers' successes in digital payment. Get inspired now.