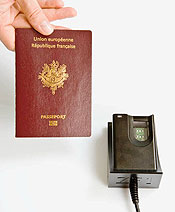 ​​​All European Member States must include digital biometric​ information in every passport issued from June 2009, a deadline France has been able to meet.

France has been an early member of the US Visa Waiver Program​, which allows French citizens to travel to the United States for tourism or business for stays of 90 days or less without first obtaining a visa.

The first generation of French electronic passports started in April 2006.

The 2008-426 decree of 30 April 2008 set up the legal framework for the launch of the second generation of French electronic passport, also known as biometric passport (le passeport biométrique).

As of the end of June 2009, all French passports are fitted with a micro-controller that contains:

In the enrollment phase, eight fingers are captured, even though only two prints will be kept.

The French passport, along with the national ID card allows for free rights of movement and residence in any of the states of the European Union and European Economic Area.

EAC​ (extended access control) is mandatory. This security mechanism​ limits access to biometrics to the issuing country and countries that have permission from the issuing country. This capability will be used to protect fingerprints, iris scans as an option and other privacy-sensitive data.​

EAC is based on a chip-dedicated Diffie-Hellman asymmetric key pair using either DH (PKCS#3) or ECDH (ISO 15946), the latter implementing elliptic curve cryptography.

The public part of the key is digitally signed by the issuing country, while the microprocessor contains the matching private section, which can never be readout.

Through chip authentication, the terminal ascertains that the chip possesses that private part, thereby identifying it as genuine and making chip cloning unfeasible.

An attacker aiming at cloning the ePassport faces the practical problem of computing the microprocessor’s private key given the public elements (which can always be obtained freely). Carrying out this task is commonly referred to as the Discrete Logarithm Problem and requires gigantic computational resources even for practical key sizes.

In other words: a brute-force attack, where the attacker gathers as much computational power as possible and implements the fastest known discrete-log extraction algorithm (currently GNFS) would typically require 273 (respectively 2103) operations for a 1024-bit (resp. a 2048-bit) DH public key, and 2128 operations for a 256-bit ECDH public key.

This represents several decades of unceasing computations over a large-scale computer network and exceeds by far the limits of practical feasibility​.

​Most useful passport in the world

According to the Global Passport Power Rank 2020, French passport rank #4 as the most useful in the world along with the ones from Sweden or Noway. The mobility score is 170 (visa-free countries).

French passport holders can visit 151 countries visa-free and 19 countries offer visas on arrival.
Discover this report and its rankings.

No prior registration to use the PARAFE smart border eGates is necessary for holders of French biometric passports.
French travelers can use the automated border gates available in many French airports such as Orly or Paris Charles de Gaulle.

Passports are checked for authenticity and biometric identification​ (face recognition) is automatically done. If it is positive (the face capture presented matches with the one in the ePassport), the gate exit door opens, and passengers continue on their way.​
Since summer 2018, new PARAFE gates are being installed in Paris airports.

As of May 2012, the French residence permit (TSE or Titre de Séjour pour Etranger) now incorporates two fingerprints in addition to the bearer's portrait in the microprocessor located on the back of the credit-card-size card.

This document is a renewable permanent residence permit allows its holder to live in France for up to 10 years.

The same issuance solution from Thales is enabling the personalization of an annual production of 800,000 residence permits.

As of September 2013, The new French driver's license in a credit card format and in polycarbonate ​is replacing the traditional pink paper document.