Thales to digitalise tactical combat training for the Polish Army

Thales has been selected to provide Poland's land forces with five tactical combat training systems “Combat Staff Trainer systems”. The award is the first export contract for this tactical combat training system, which is already in service with the French Army. Thales is a European leader in advanced simulation-based tactical training with a system used to train personnel at several levels, from dismounted soldiers to battalion commanders.

On 11 June 2021, Thales signed an agreement to provide the Polish Army with five Combat Staff Trainer tactical training systems to be installed at several locations in Poland. This is the first time the Polish armed forces have acquired a digital solution to meet their tactical training requirements. The computer-based simulation system from Thales is used to conduct collective training exercises in a virtual and cybersecured environment representative of the Polish Army's theatres of operations.

In today's military operations, each level in the command chain has to analyse complex datasets from multiple sources and make critical decisions quickly in high-intensity conflict situations. The Combat Staff Trainer from Thales enables personnel at every level of the organisation to prepare for tactical missions in a highly realistic environment.

An AI-based Computer Generated Forces (CGF) application helps to develop the training scenario and control the virtual entities taking part in the mission. The Combat Staff Trainer solution includes a complete software suite to prepare and monitor training exercises and conduct after-action reviews. The CGF application models every movement of entities on the ground, taking terrain features and the perceived tactical situation into account to reproduce their behaviours realistically. 2D and 3D models of the theatre of operations will be used to construct scenarios in urban areas and open terrain (mountainous, desert, coastal, etc.) and offer land forces staff a fully immersive training experience.

The proven Combat Staff Trainer system is already in service with the French Army. A number of upgrades and expanded functionality will be introduced to meet the specific needs of the Polish land forces, and personnel at every level of the command chain, from the dismounted soldier to the battalion commander, can now take part in the exercises. 3D models of the actual weapon systems in service with the Polish armed forces will be developed for a more immersive training experience. The systems will be delivered to five regiments of the Polish armed forces, and each one can be used to train up to 38 people at the same time.

The Combat Staff Trainer was developed in France and the systems will be delivered in stages over the next two years. Thales staff based in Poland will be responsible for installing and supporting the five systems in close collaboration with local users. 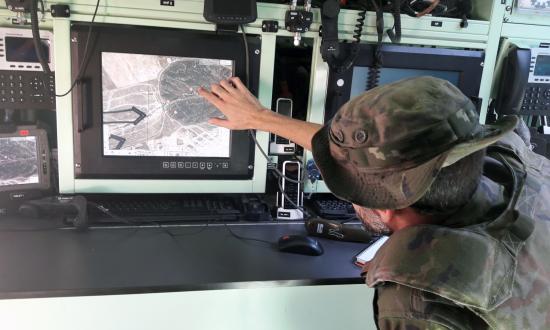