A history of High Speed journeys in Spain 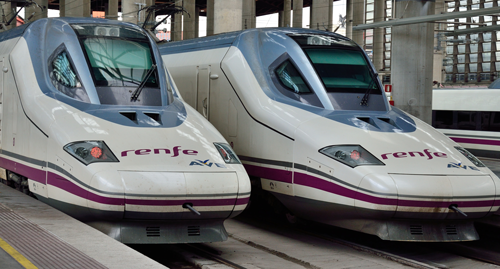 The first High Speed Rail journey in Spain departed Madrid for Seville on the 21st of April, 1992. In the three decades since, Spain has developed one of the most advanced rail networks in the world, thanks to its leading network length, level of modernity, commercial speed, the versatility of its fleet and punctuality. As of today, the Spanish High Speed network spans 3,402 kilometres, which is the longest high performing network in operation in Europe and second in the world after China. This puts the network ahead of those in other countries that have a great tradition in this mode of transport.

Since the first journey on the Spanish network, more than 400 million people have travelled using the High-Speed infrastructure across a wide range of distances, carrying more than 100,000 passengers a day and connecting 47 cities. The number of passengers using the High Speed network in Spain has seen steady growth year after year, reaching 22.4 million in 2019, a 5% increase year on year.

The expansion of the High Speed rail network planned by the Spanish government will continue to see the development of the network in the medium-term. New lines, such as the Northern corridors, are under construction and others are also expected to be developed. Today, two out of three of the Spanish population has access to High Speed transport in their province. The goal is to grow this proportion to the largest possible number of citizens, assuring that nine out of ten citizens are within 30 kilometres of a High Speed station.

In Spain, Thales has equipped more than 2,800 Km of High Speed lines with either signalling and/or communications systems. A recent example was the deployment of ERTMS L2 technology in October 2020 on passenger services operating on the section between Madrid-Chamartín and Olmedo, the Madrid-Valladolid line and also the section between Olmedo and Pedralba on the Madrid-Galicia line. The impact was a reduction in travel times and distances that covered an area supporting more than 30% of the national population and surface indexes. This is the first section to become operational with ERTMS L2 of the High Speed Northwest corridor.

Investment in High Speed has helped position the railway sector as one of the main drivers of economic and social development in the countries where it is deployed. Increased investment drives job creation (both directly and indirectly), reinforces regional cohesion, and opens new markets, especially in the services sector. High speed is the preferred option for mobility on medium and long-distance routes, and also provides an effective solution to existing road and air congestion problems. By reducing the numbers of cars on roads and planes in the air, their consequent pollution can be improved.

In today’s digitally connected world the value of time cannot be underestimated and this is particularly true when it comes to High Speed infrastructure. The average commercial speed of the Spanish high speed network is 222km/h, which is higher than in pioneering countries including Japan and France. This is one of the key technological factors of this transformation. Since the late eighties, there has been an increase in speed of 160% highlighted by the high speed line between Barcelona and Madrid, where the average commercial speed on a journey without stops is 248 km/h. The result is a connection between Spain’s two largest cities that takes just 2 hours and 30 minutes.

Commissioning of the High Speed lines has benefitted not only the cities they pass through, but also many Spanish regions. The interoperability of conventional and high speed networks was made possible by gauge changing technology that allows adjustable-axle trains to circulate on both. The social impact of the High Speed lines is also notable on roads, through the creation of new organic supply and demand scenarios, and in aspects such as fewer accidents and time saved in road travel because of less congestion.

The high speed transport activity between 1992 and 2016 has allowed society to save an estimated at 4,286 million euros, if evaluated in terms of economic impact on climate change, pollution and the accident rate that this mode of transport would have expected by other means. Environmental integration is a key part of the philosophy inspiring all high-speed rail networks. The railway is the most environmentally friendly means of transport; CO2 emissions are much lower than those generated by other modes of transport, and it also leads to considerable savings in energy consumption. In the first 25 years, it is estimated that savings of more than 12.9 million tonnes of CO2 emissions and 2.6 million tonnes of oil have be made. Added to this, 100% of power consumed by High Speed trains in Spain is generated by carbon-free, renewable sources.

Spain decided to strategically deploy the ERTMS system in order to build the High-Speed network as soon as it was available, adhering to the European directive and making a clear commitment to this new interoperable system. As a result, Spain now boasts the most kilometres of ERTMS in operation in the world. Major High Speed railway investments in recent years have enabled ERTMS to be developed locally, which has meant that more than 3,000 Km of railway line have been equipped with the technology (in service or in construction/test), of which the large majority are equipped with the Level 2 variant. The system continues to be deployed on additional High Speed lines that are under construction.

Spain has played a key role in the deployment, development and success of ERTMS, and is an international leader in the efficient operation of the system. Spain has shown the rest of Europe that technical interoperability among all providers is possible, with high levels of punctuality and reliability and boasts the longest interoperable route in Europe between Barcelona and Malaga. This line is the clearest example that interoperability is now a demonstrated fact. The experience and technological knowledge gained has boosted the competitiveness and internationalisation of Spanish railway industry companies worldwide.