Thales SuperCam laser prepares to follow ChemCam to Mars in 2020

NASA has begun building the Mars 2020 rover and integrating the instruments it will carry. The Mars 2020 mission will follow in the footsteps of Curiosity, which has been exploring Gale Crater on the surface of Mars for five and a half years, and will continue the search for evidence of past life. The Mars 2020 rover will look much like its predecessor, but will boast a number of innovations, including instruments never before sent to the Red Planet. 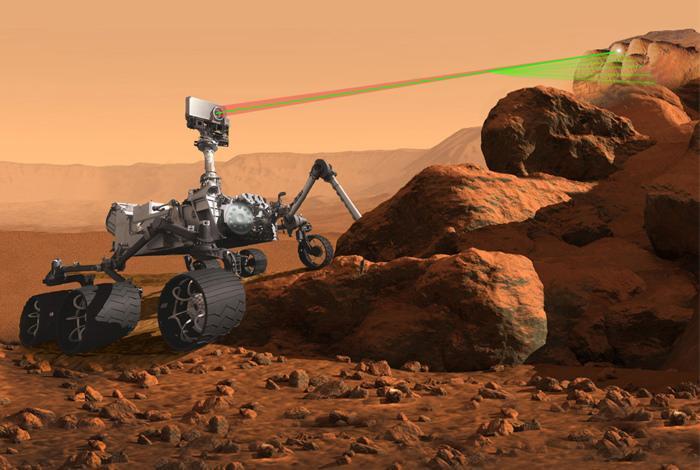 © ©NASA
Selected again for NASA’s Mars exploration programme, Thales has now delivered the laser for the SuperCam instrument to the French space agency CNES, which is partnering NASA for Mars 2020. The SuperCam laser developed by Thales is an evolved version of the ChemCam laser on Curiosity.

The ChemCam laser developed by Thales for CNES was the first-ever power laser to operate on another planet. ChemCam is still hard at work on Mars and has fired over 500,000 times to date.

The SuperCam laser developed by Thales is an evolved version of ChemCam. As well as the laser-induced breakdown spectroscopy (LIBS) system used on ChemCam, the SuperCam instrument also features a non-destructive Raman spectroscopy mode for the analysis of molecular vibration energies. This analysis technique has never been tested on Mars and will be used to look for the possible indicators of life.

The powerful image of the Curiosity rover arriving on Mars in 2012 regularly came to mind during the development of SuperCam — especially when we were making choices that could impact the laser’s robustness and durability.
Eric Durand, head of the SuperCam programme at Thales’s optronics business

Delivering the new SuperCam laser is a real challenge, not least because it packs additional functions into a unit the same size as the ChemCam laser, as well as the system that allows operators to switch between the LIBS and Raman modes.

Beyond the size restrictions, the teams have also significantly increased the instrument’s analysis capabilities. The SuperCam laser can produce 10 times as many shots in burst mode for faster sampling — 1,000 shots per burst, compared to a maximum of 100 with ChemCam and at a frequency three times higher (10 Hz). All this has been achieved in an extremely short timeframe of just three years, whereas a typical space programme would have a development cycle of nearer 10 years.
[[asset:image:243637 {"mode":"original","align":"center","field_asset_image_copyright":["\u00a9NASA"]}]]
Thales has made innovation a core strategic priority and believes that real innovation hinges on the ability to harness creativity to meet actual customer needs and develop disruptive technologies. The company’s high-power lasers help advance research with practical applications in industry, nuclear energy and the medical sector. A total of almost 60 laser systems are in operation worldwide.

SuperCam instrument
Thales has developed the optomechanical part of the SuperCam laser (optics and associated mechanical elements), excluding the electronics provided by the IRAP astrophysics and planetology research institute. IRAP is also responsible for qualification and testing of the instrument in the kinds of conditions it will experience on Mars (temperature, shock, vibration, radiation, other impacts on service life, etc.).
The Los Alamos National Laboratory (Los Alamos, NM) and the IRAP astrophysics and planetology research institute (CNRS, Univ. of Toulouse, CNES) are jointly responsible for delivering the SuperCam instrument to NASA.

ExoMars mission
ExoMars 2020 is led by the European Space Agency (ESA) in partnership with Roscosmos. This new mission will use a Proton launch vehicle to deliver a Russian-built landing platform and the European ExoMars rover to the surface of Mars, after a nine-month voyage.

Thales Alenia Space is prime contractor for both the ExoMars 2016 and ExoMars 2020 missions and is responsible for planning: For the ExoMars 2016 mission, Thales Alenia Space developed the EDM module for entry and descent onto Mars and the Trace Gas Orbiter (TGO). For ExoMars 2020, it will develop the guidance and navigation system for the European spacecraft’s carrier and descent modules and will also develop and integrate the Analytical Laboratory Drawer.