To solve mysteries about ancient works or authenticate heritage objects, specialists often need support from science. Since 1988, AGLAÉ has been installed at the Centre de Recherche et de Restauration des Musées de France (C2RMF, Palais du Louvre). It is the only particle accelerator in the world that is exclusively dedicated to studying heritage objects. Today, the “New AGLAÉ” installation improves that performance: automates the beam line, optimizes chemical imaging on the micrometer scale, and enables 24-hour analysis. In association with CNRS, the project is supported by the Ministry of Culture, Investissements d’Avenir, and the city of Paris. The new AGLAÉ was inaugurated on November 23, 2017 by Françoise Nyssen, Minister of Culture and Frédérique Vidal, Minister of Higher Education, Research and Innovation.

Culturally significant objects hold puzzles within: Where do their materials come from? What are the secrets to how they were made? How can we conserve and restore them? We can find some answers by exploring the objects’ surfaces in a non-invasive manner, i.e. without needing to take samples or damaging them. Since the end of the 1980s, the Accélérateur Grand Louvre d’Analyse Élémentaire (AGLAÉ) located in the basement of the Palais du Louvre has been a major part of solving these research puzzles.

AGLAÉ accelerates particles (hydrogen or helium nuclei) to speeds of the order of 20,000 km/s. As they penetrate the material, these particles slow down and release their energy to the atoms, which in turn emit radiation (X-rays, gamma rays, light) and/or other particles. From these emissions we can identify all of the chemical elements present in the object’s outer layers, even if only present in trace amounts. Their nature, concentration and location reveal the object’s history and enable authentication.

From AGLAÉ to New AGLAÉ: Multiple challenges and innovative collaboration

The initial instrument could not analyze fragile materials such as biological materials like organic and inorganic pigments in painted works. These would have been visibly changed by the particle beams. The New AGLAÉ includes a more sensitive detection system that reduces the radiation these works are exposed to by a factor of 10, and creates chemical mappings simultaneously with several analytical techniques. The New AGLAÉ multi-detector, made using financing from the city of Paris, was installed in 2013.
Since then, due to automation issues, the accelerator could only operate from 8 to 10 hours per day, limiting access to this tool that is in high demand by outside users, in France and throughout Europe. Thales, a company recognized for its skills in the field of accelerators, made an innovative suggestion for stabilizing and automating the accelerator and the beam line. This part of the project was financed by Investissements d’Avenir achieved as part of a collaboration between C2RMF, CNRS and Chimie ParisTech. From late 2017, the New AGLAÉ will now be able to operate 24/7.
The first analyses will be performed on statuettes from the group of bronzes stored at the Forum Antique de Bavay (Nord) to reveal their production techniques and to enrich the exhibition that will be presented in September 2018. After that, the Celtic treasures of Lavau (Aube) will follow. Studying those will help define how to conserve and restore them. 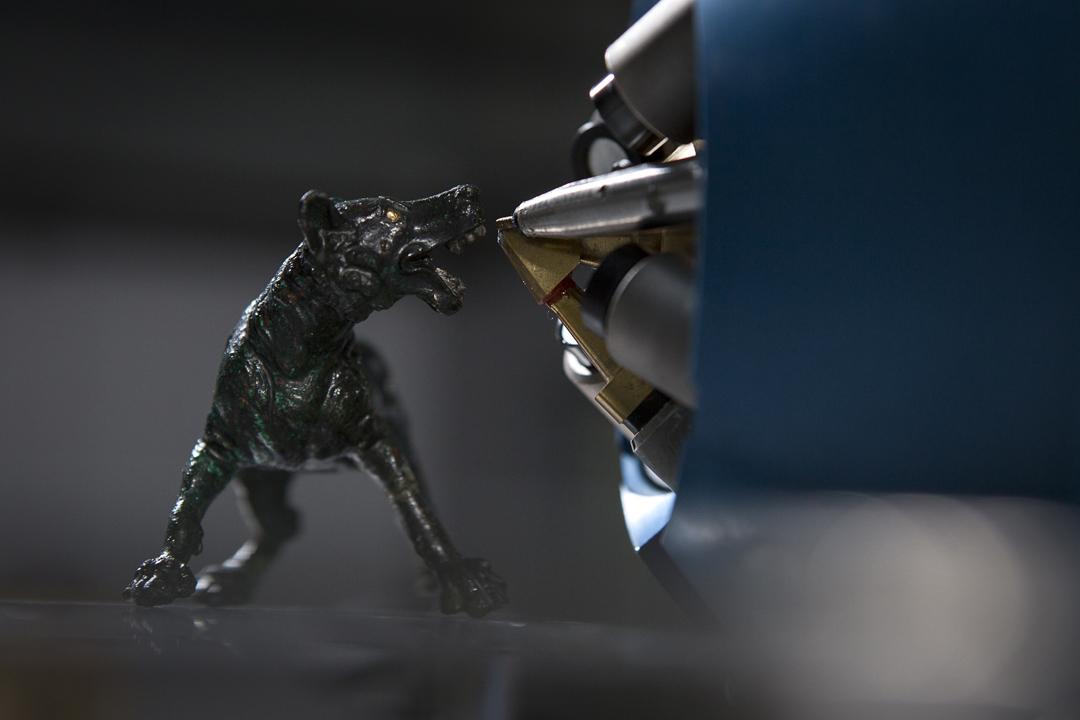 In its role in successive European projects, AGLAÉ was the world’s first research installation entirely dedicated tocultural heritage, and accessible to European researchers. It will be a major French contribution and be one of thepillars of the E-RIHS project (European Research infrastructure for Heritage Science), included in the Europeanroadmap of future installations.
To celebrate the relaunch of the New AGLAÉ, a colloquium takes place on November 30 in the Louvre’s auditorium. Itwill be an occasion for presenting how the instrument now performs and reviewing some of the landmark studies achieved with AGLAÉ, such as those on the Celtic tomb at Lavau, medieval stained glass, and prehistoric boneobjects colored by ochers.
Each specific case will be presented by a pair composed of an analytical science specialist and an archeologist or art historian.