Dakar, September 11, 2020 – The Agency for Air Navigation Safety in Africa and Madagascar, ASECNA, has started to broadcast a SBAS (Satellite-Based Augmentation System) signal over Africa & Indian Ocean (AFI) region, providing the first SBAS open service in this part of the world via NIGCOMSAT-1R Satellite managed and operated by Nigerian Communications Satellite Ltd under Federal Ministry of Communications and Digital Economy of Nigeria. 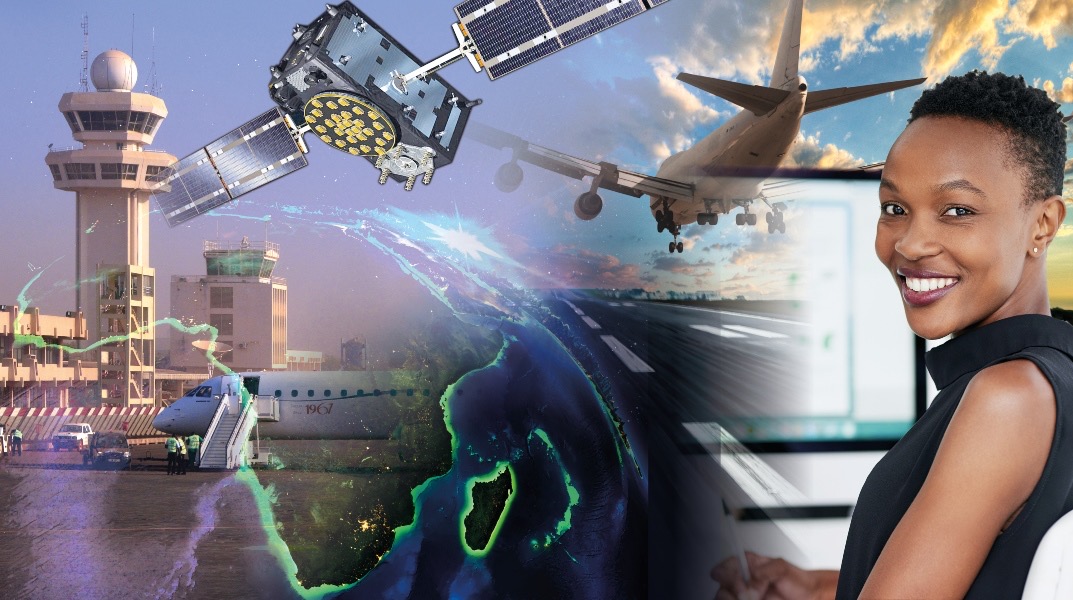 This early open service is provided as part of the « SBAS for Africa & Indian Ocean » programme which pursues the autonomous provision over the continent of SBAS services, to augment the performances of the satellite navigation constellations GPS and Galileo. With improved accuracy to within a meter, and boosted integrity, availability and continuity of safety-related applications, these SBAS services will improve flight safety and efficiency in Africa, and also benefit to the economy in many areas as land, sea and rail transport, as well as mass market applications, supporting user safety, cost-effectiveness and sustainable development.
The launched open service essentially aims to carry-out technical trials, and to undertake with partner airlines field demonstrations for aircraft and rotorcraft, to demonstrate the benefits of the future operational safety-of-life SBAS services, expected from 2024. It will also include early Precise Point Positioning (PPP) and emergency warning service to populations, which performance will be proven through other demonstrations.
The signal-in-space is generated by a dedicated system testbed, developed as part of the “SBAS for Africa and Indian Ocean” preliminary design phase, financed by the European Union and awarded to Thales Alenia Space, Joint Venture between Thales (67%) and Leonardo (33%). The “SBAS for Africa and Indian Ocean” is based on the European EGNOS1  developed by the European Space Agency (ESA) acting under delegation of the European Commission and operated by the European GNSS Agency GSA.
The system prototype uses as reference stations network the SAGAIE network deployed by CNES and ASECNA with the support of Thales Alenia Space.
The signal is broadcasted via the SBAS payload on NigComSat 1R GEO satellite of the Nigerian Communications Satellite Ltd and an uplink station deployed in Abuja (Nigeria). It is compliant to the Standards and Recommended Practices of the International Civil Aviation Organisation, and the Minimum Operational Performance Standard developed by the RTCA (Radio Technical Commission for Aeronautics) organisation. It will be visible in the whole Africa and Indian Ocean, up to the West Australian coast, and also in Europe.

“We are proud to be part of this ambitious program to provide satellite navigation services in the Africa and Indian Ocean region. The use of our geostationary communication satellite NIGCOMSAT-1R navigation payload to broadcast the first signal will be Africa’s premier contribution to SBAS as a regional satellite-based augmentation system for the continent”

“Our longstanding expertise acquired with the development of EGNOS1 SBAS in Europe and KASS SBAS in Korea combined with our new leading-edge satellite positioning technologies makes Thales Alenia Space the ideal partner to best support countries to implement their own SBAS efficiently. The equatorial region represents also a key engineering challenge for such a system due to difficult ionosphere conditions, for which Thales Alenia Space has developed a proven solution”,

The provision of the first African SBAS early service is a crucial major step forward in the development of satellite navigation in the AFI Region, and in the deployment of the “SBAS for Africa and Indian Ocean” system, the navigation solution for Africa by Africa. It demonstrates the ambition and commitment of ASECNA to enhance air navigation safety for the benefit of the whole continent, in line with my vision for the unification of the African Sky

About Thales Alenia Space
Drawing on over 40 years of experience and a unique combination of skills, expertise and cultures, Thales Alenia Space delivers cost-effective solutions for telecommunications, navigation, Earth observation, environmental management, exploration, science and orbital infrastructures. Governments and private industry alike count on Thales Alenia Space to design satellite-based systems that provide anytime, anywhere connections and positioning, monitor our planet, enhance management of its resources, and explore our Solar System and beyond. Thales Alenia Space sees space as a new horizon, helping to build a better, more sustainable life on Earth. A joint venture between Thales (67%) and Leonardo (33%), Thales Alenia Space also teams up with Telespazio to form the parent companies’ Space Alliance, which offers a complete range of services. Thales Alenia Space posted consolidated revenues of approximately 2.15 billion euros in 2019 and has around 7,700 employees in nine countries.