Rome, April 25, 2016 – Sentinel-1B satellite, designed built by Thales Alenia Space as prime contractor, was successfully launched by a Soyuz-Fregat A rocket from the Guiana Space Center in Kourou, French Guiana. This satellite is part of the European Commission’s vast Copernicus Earth observation program, coordinated by the European Commission, with the European Space Agency (ESA) in charge of the space segment.

“The success of this launch is particularly significant for our company,” said Donato Amoroso, CEO of Thales Alenia Space Italia and Deputy CEO of Thales Alenia Space, “especially in light of the contracts we recently signed with ESA to build other Sentinel satellites and carry on the Sentinel-1 and -3 missions. Because of our major role in a number of Earth observation programs, using both radar and optical technologies, Thales Alenia Space, a Joint Venture between Thales and Finmeccanica,  offers the most complete array of solutions to address the technological challenges facing these ambitious programs.”

Thales Alenia Space is prime contractor for the Sentinel-1 family, in charge of the design, development, integration and testing of these satellites.

The Sentinel-1B satellite, a twin of Sentinel-1A, launched in 2014 and now in orbit, was designed and integrated at Thales Alenia Space’s Rome facility, The company’s plants in L’Aquila and Milan designed a number of critical components, including the T/R modules and the front-end electronics for the C-band synthetic aperture radar (SAR), along with the advanced management and data transmission subsystems and the onboard computer. The T/R modules and front-end electronics are the “core” of the C-band SAR antenna, developed by Airbus Defence & Space according to Thales Alenia Space Italy’s technical specifications. The Sentinel-1B satellite also passed all verification tests at Thales Alenia Space’s clean rooms in Cannes, France.

Sentinel-1B, based on the PRIMA platform developed by Thales Alenia Space on behalf of the Italian space agency ASI, will be placed in orbit at 700 kilometers and will offer resolution ranging between 5 and 25 meters, depending on the operating mode chosen. Users will enjoy a continuous stream of images, day or night and under all weather conditions.

The Sentinel-1 family ensures data continuity with ESA’s previous ERS and Envisat missions, while also improving accuracy and resolution. Along with Sentinel-1A, Sentinel-1B will reduce revisit time from 12 to 6 days, thereby speeding up the localization of geo-climatic fluctuations within the areas under observation.

The European Commission’s Copernicus program is designed to ensure Europe’s independence in terms of environmental data collection and management, and thereby support public policy decisions. Thales Alenia Space recently won contracts from ESA to build the Sentinel-1C and -1D satellites, and also for the Sentinel-3C and -3D satellites dedicated to environmental and oceanographic monitoring.

Finmeccanica also contributed to Sentinel-1B and will contribute to the development of Sentinel-1C and -1D by providing the autonomous star tracker attitude sensors and power units, all indispensable components in controlling satellite attitude and ensuring the continuous availability of radar images.

Once in orbit, Sentinel-1B will send data to several European centers. In Italy, this data will be collected by a station at the e-GEOS Space Center in Matera, a joint venture between Finmeccanica-Telespazio (80%) and the Italian space agency (20%). 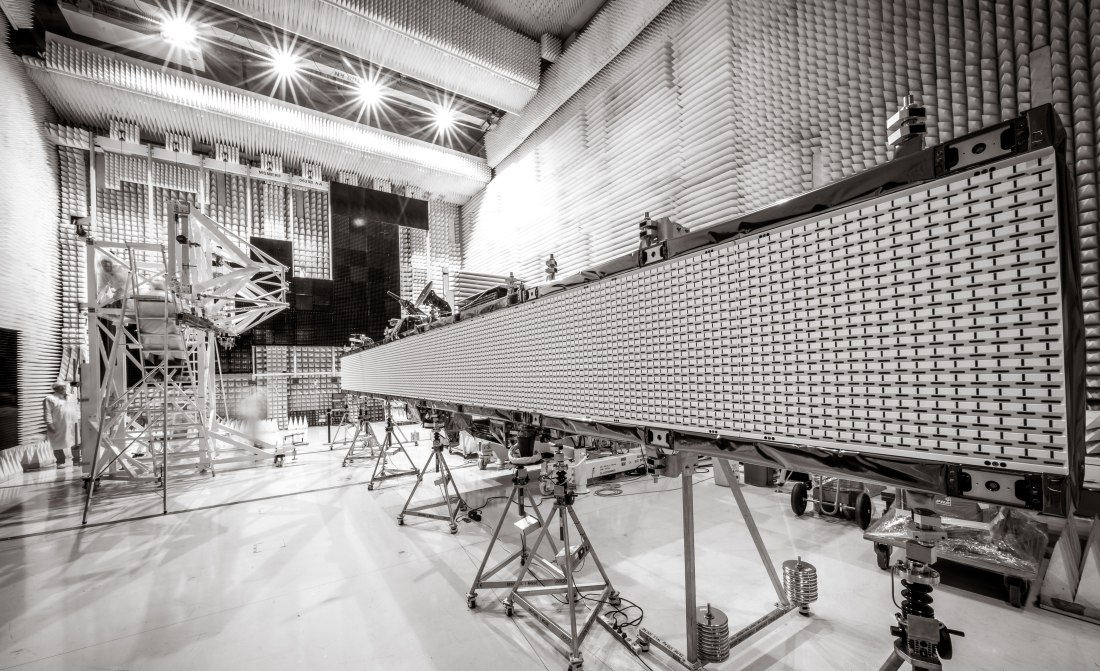 Thales Alenia Space, a joint venture between Thales (67%) and Finmeccanica (33%), is a key European player in space telecommunications, navigation, Earth observation, exploration and orbital infrastructures. Thales Alenia Space and Telespazio form the two parent companies' “Space Alliance”, which offers a complete range of services and solutions. Because of its unrivaled expertise in dual (civil/military) missions, constellations, flexible payloads, altimetry, meteorology and high-resolution optical and radar instruments, Thales Alenia Space is the natural partner to countries that want to expand their space program. The company posted consolidated revenues of 2.1 billion euros in 2015, and has 7,500 employees in eight countries. www.thalesaleniaspace.com