The recognition of an inspired talent in the space industry

Bristol, 11 October 2017 – Portia Bowman, an inspiring Thales Alenia Space systems engineer from Bristol has received a Point of Light award from the UK Prime Minister’s Office in recognition of her volunteer work to create SpaceCareers.UK, a website that has helped more than 100,000 people learn about careers in the Space industry. 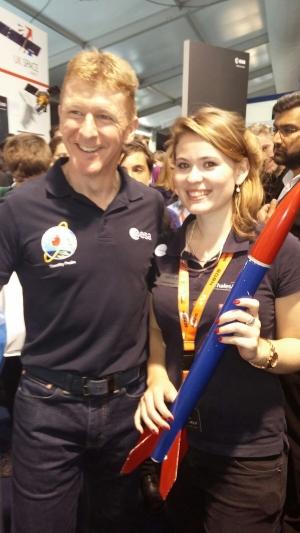 In 2014, whilst completing her Master’s degree in Space Exploration Systems at the University of Leicester, Portia was busy solving another real life challenge faced by hundreds of graduates -  how to find that perfect job in Space!  Alongside Joseph Dudley from London, Portia decided to find all the space career and job opportunity resources she could find and make them available in one, easy to access, place on the internet and call it SpaceCareers.UK

“Having the idea was just the start” said Portia. “To bring my vision to life meant contacting all the space companies in the UK I could find, speaking to hundreds of people within the Industry and encouraging as many students as possible to support the project. At one point, I oversaw the work of ten volunteers who, like me, were really passionate to make this happen, whilst managing their academic workload.”

On the same day as UK Astronaut Major Tim Peake began his mission into Space in 2015, Portia and Joseph successfully launched their website and since then more than 200 jobs and 100 news articles have been shared, and the website now has over 15 volunteers involved.

The Point of Light Award recognises outstanding individual volunteers, people like Portia who are making a change in their community. This award was announced to both Portia and Joseph on the 60th anniversary of the launch of Sputnik, the first ever artificial Earth satellite and a personal letter of thanks was sent from the UK Prime Minister, Rt. Hon. Theresa May.

Portia and Joseph both volunteer for the ‘UK Students for the Exploration and Development of Space’ UKSEDS, which supports students and enthusiasts across the country by running space projects, hosting conferences and workshops, and undertaking outreach.


About Thales Alenia Space
Combining 40 years of experience and a unique diversity of expertise, talents and cultures, Thales Alenia Space architects design and deliver high technology solutions for telecommunications, navigation, Earth observation, environmental management, exploration, science and orbital infrastructures.  Governments, institutions and companies rely on Thales Alenia Space to design, operate and deliver satellite-based systems that help them position and connect anyone or anything, everywhere, help observe our planet, help optimize the use of our planet's – and our solar system’s – resources. Thales Alenia Space believes in space as humankind’s new horizon, which will enable to build a better, more sustainable life on Earth. A joint venture between Thales (67%) and Leonardo (33%), Thales Alenia Space also teams up with Telespazio to form the parent companies’ Space Alliance, which offers a complete range of services and solutions. Thales Alenia Space posted consolidated revenues of about 2.4 billion euros in 2016 and has 7,980 employees in nine countries. www.thalesaleniaspace.com